With Fewer than 20 Loa Water Frogs Left in the World, Hatching of Tadpoles Revives Hope for Critically Endangered Species 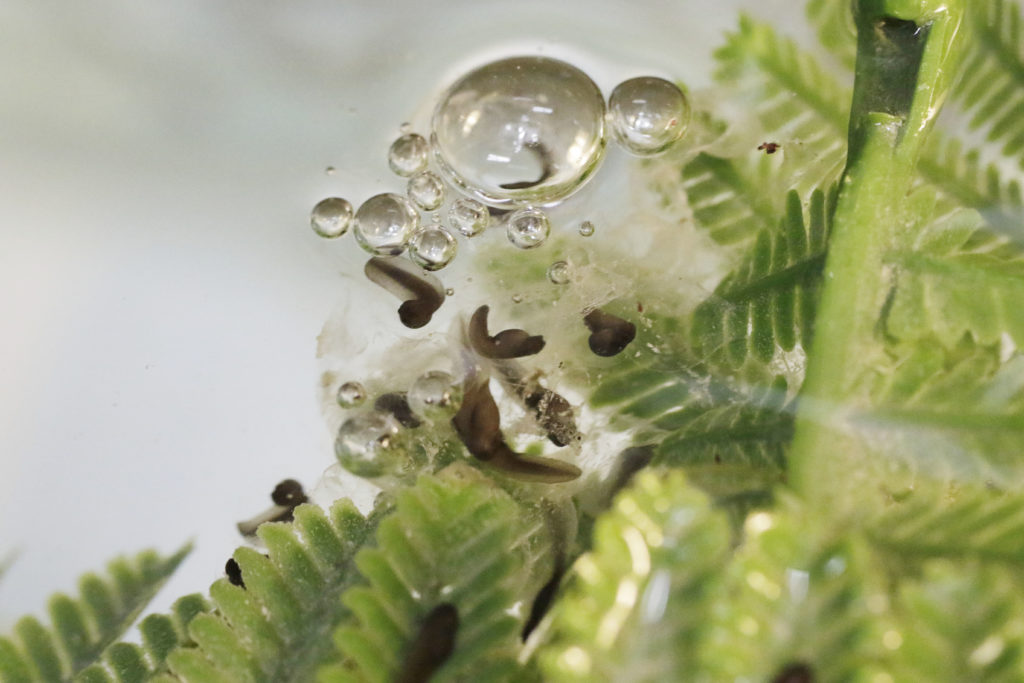 Nearly 200 Loa water frog (Telmatobius dankoi) tadpoles hatched Tuesday, Oct. 20, at the National Zoo of Chile, a little more than a year after a team of conservationists in Chile swiftly evacuated the last-known 14 frogs from perilously dry habitat and brought them to the zoo.

“The zoo’s specialists not only nursed the animals back to health after they were discovered malnourished and near-death in the wild last year, but they have now succeeded in breeding a new generation of a species that has very nearly vanished,” said Lina Valencia, Global Wildlife Conservation’s Andes conservation officer. “While the zoo rears these tadpoles and breeds additional pairs, it is important that the government continues the great work it started in rescuing the animals by restoring and protecting the frogs’ habitat so that they can return to their home in the wild.”

In June of 2019, a team of conservationists and indigenous leaders discovered that the habitat of the Loa water frog outside of the city of Calama, located in the middle of the Atacama desert, had dried up as the result of extraction of water for mining, agriculture and real estate development, in a region where water is a scarce resource. All of the frogs had been pushed into a tiny pool of muddy water.

The team collected the last 14 individuals and brought them to the National Zoo of Chile—which belongs to the Metropolitan Park of Santiago, a public service of Chile’s Ministry of Housing and Urbanism—to improve their health, learn to care for them, and establish a conservation breeding program. Now the zoo will navigate the challenging task of rearing a species that nobody has tried to care for before.

"When we brought these animals to the zoo, I didn't even know if they were going to survive the transfer from Calama on the plane to Santiago,” said rescue team member Andrés Charrier, a herpetologist affiliated with the Chilean Herpetological Society. “Now we have the great news that these animals were able to reproduce, though we have a tremendous new challenge now to learn how to feed and care for the tadpoles. There is an incredible group of specialists—including all of the people at the National Zoo—working to save these frogs and making history."

The Loa water frog is considered critically endangered by the IUCN Red List of Threatened SpeciesTM and was once found only in a single stream in Chile. Experts say there may be between five and eight individuals still living in the wild. Returning the species to the wild someday will require identifying a safe home for the frogs and protecting that habitat from the threat of illegal water extraction and habitat destruction.

“We are very happy that we have already achieved two of our three objectives,” said Martin Andrade, director of Metropolitan Park of Santiago. “The first was the survival of the frogs that arrived from Calama as part of an emergency rescue operation, the second was the reproduction of these animals, and the third objective, which will take longer, is the reintroduction of this species back into its natural habitat.”

There are at least 63 known species of water frogs, or Telmatobius species, found from Ecuador to Chile, including in Peru, Bolivia and Argentina. Many of these species, like the Loa water frog, are microendemic, which means they live in just one small place. Water frogs are semi-aquatic or entirely aquatic, making them very sensitive to any changes in their environment. Habitat destruction, pollution, disease and invasive trout are among the biggest threats they face. About 10 species of water frog live in Chile, and many of them are likely facing the same threats as the Loa water frog.

“This would not have been possible if it had not been for the tireless work of the National Zoo staff, who even had to replicate the exact conditions of the water in the streams of the deserts in the northern part of our country in order to keep them alive,” said Alejandra Montalba, director of the National Zoo of Chile.

Global Wildlife Conservation, the IUCN SSC Amphibian Specialist Group, the Amphibian Survival Alliance, and the Santiago Metropolitan Park are asking people around the world to spread the word about the Loa water frogs using the hashtags #SaveTheLoaFrog and #SalvemosLasRanitasDelLoa to show their international support for these and other species of endangered frogs.

"I think the challenge now is addressing the frog's habitat, since we will need to restore the place where this species lives to be able to take the frogs back to their lands of origin.

“People may think that biodiversity loss occurs somewhere far away in Africa or the tropics. The sad case of the Loa water frogs shows that extinction can occur in front of our very eyes in real time. The good part of the history is that with collaboration and support we can win the race against extinction.”

“This extraordinary development shows that with dedication, commitment and collaboration it is possible to save species on the brink of extinction. It is now imperative that the remaining habitat is also saved.”

The Amphibian Survival Alliance (ASA) promotes the conservation of amphibians and their habitats through dynamic partnerships worldwide. ASA raises awareness of amphibians and their plight, and helps channel resources towards the implementation of vital conservation actions, as guided by the global Amphibian Conservation Action Plan. ASA works directly with the IUCN SSC Amphibian Specialist Group and Amphibian Ark to achieve the shared vision “Amphibians thriving in nature”. ASA champions the extraordinary work of its partners to build a strong, collaborative future for amphibian conservation. Learn more at www.amphibians.org and www.synchronicityearth.org