Two Rare Amphibians Lost To Science Re-Discovered In The Philippines 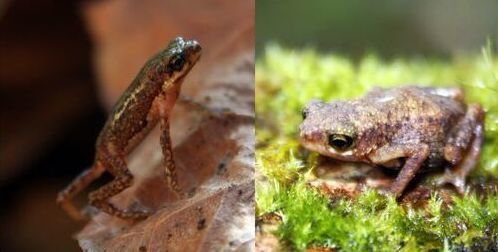 A team of researchers from the Centre for Sustainability, the Palawan Council for Sustainable Development and partners have re-discovered two amphibian species thought lost to science in their natural habitat on the lush island province of Palawan in the Philippines: the Palawan toadlet (Pelophryne albotaeniata) and the Malatgan River caecilian (Ichythyophis weberi).

These re-discoveries were two of many exciting results from a biodiversity survey in this region, and part of a larger project involving Global Wildlife Conservation (GWC), the Amphibian Survival Alliance (ASA) and Rainforest Trust to create a new reserve called Cleopatra’s Needle Protected Area.

“I never imagined that the Palawan toadlet would be found again within the area we were working to protect,” said Robin Moore, conservation officer for GWC and the ASA. “Finding lost species is always exciting, but to rediscover two lost species in forest that we are working to have protected is just incredible, and validates the need for projects such as this to prevent the extinction of such elusive species.”

The Palawan toadlet had only been seen once in the 40 years before this recent re-discovery, while the Malatgan River caecilian has not been collected in the last 50 years. The last evidence of the limbless amphibian was lost during World War II, when the museum housing the original sample was bombed.

Palawan is a last frontier for conservation in the Philippines. The island boasts half of its original primary forests, some of the oldest and most diverse in Asia. The forests of Pawalan are understudied and diminishing rapidly, however. GWC and ASA are working with local partner the Centre for Sustainability and the last members of the Batak tribe to create Cleopatra’s Needle Forest Reserve to safeguard more than 40,000 hectares of lush forest home to dozens of unique species and the Batak tribe itself.

“The work that our local partners are doing to protect the forests around Cleopatra’s Needle is vital, urgent and very exciting,” Moore says. “The island and its inhabitants will truly benefit from the preservation of a unique natural heritage.”

The biodiversity survey, which was funded in part by Global Wildlife Conservation, aims to help conservationists understand which species depend on this safe haven, what kind of habitat those species need and how to best protect the area. The primary expedition took place between Dec. 1 and Dec. 14, 2014, while the researchers conducted a series of smaller research trips between December of 2014 until February of 2015. The surveys yielded a number of significant results, summarized here.

Global Wildlife Conservation protects endangered species and habitats through science-based field action. GWC envisions a world with diverse and abundant wildlife and are dedicated to ensuring that the species on the verge of extinction are not lost. The global organization brings together scientists, conservationists, policymakers and industry leaders to ensure a truly collaborative approach to species conservation. Learn more at globalwildlife.org

The Amphibian Survival Alliance is the world’s largest partnership for amphibian conservation, formed in response to the decline of frogs, salamanders and caecilians worldwide. Without immediate and coordinated action we stand to lose half of some 7,000 species of amphibians in our lifetimes. The ASA draws on cutting-edge research to protect amphibians and key habitats worldwide, in addition to educating and inspiring the global community to become a part of the amphibian conservation movement. Learn more at www.amphibians.org

Photo: The re-discovered Palawan toadlet (Pelophryne albotaeniata) had only been seen once in the 40 years before this recent re-discovery. Photo: Centre for Sustainability.