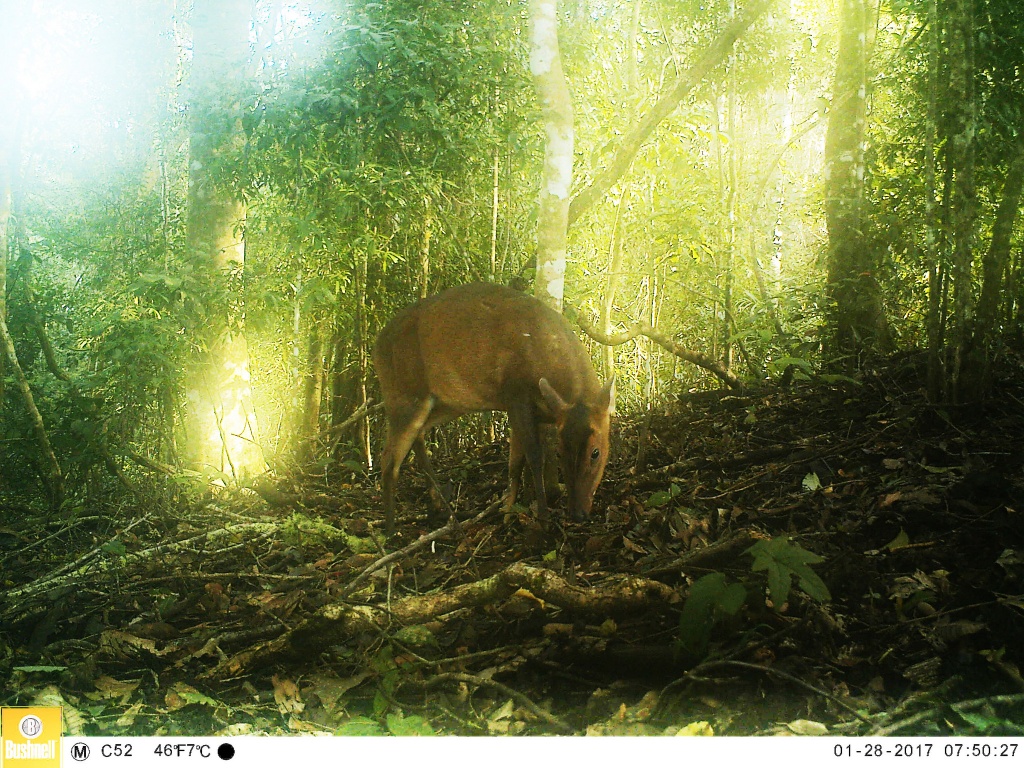 Conservationists have caught on camera one of the rarest and most threatened large mammal species in Southeast Asia, the large-antlered muntjac, in Lang Biang Biosphere Reserve in south-central Vietnam. This is only the third site in the last 10 years where this species of muntjac, or barking deer, has been photographed in Vietnam. While only a few photos have been taken from the other two sites, the recent photos have spurred hope that the critically endangered species still maintains a foothold in the country.

“There have been tens of thousands of ‘camera-trap days’ of effort in the Vietnamese Annamites, and we’ve only seen a few photos of the large-antlered muntjac in the last 15 years,” said R. J. Timmins, Saola Working Group (SWG) member who helped guide the survey work. “It’s really exciting to get photos of this very rare species with only 14 cameras and little over a month of effort. It suggests the site maybe the best chance for conserving the species in Vietnam.”

From December 2016 to February 2017, the Southern Institute of Ecology (SIE), a research institute based in Ho Chi Minh City, Vietnam, conducted the preliminary camera trap survey in Lang Biang Biosphere Reserve, with technical support from researchers in the Saola Working Group, Leibniz Institute for Zoo and Wildlife Research and Global Wildlife Conservation. The study aimed to assess the mammal and ground-dwelling bird community in the national park. With just 14 camera traps, the researchers recorded six species of ground-dwelling birds and at least 22 mammal species, including a photograph sequence of a female large-antlered muntjac.

The large-antlered muntjac is one of a suite of endemic mammal species discovered in the last 25 years in the Annamite Mountain range, an isolated mountain chain straddling the Vietnam-Lao PDR border. Other newly discovered mammal species include the antelope-like saola, the Annamite striped rabbit and the kha-nyou. The Annamite Mountains harbor one of the highest concentrations of endemic species, or species found nowhere else, recorded in a continental setting.

“The protected area staff at the site are very supportive and want to protect the tremendously important natural heritage there,” said Duc Hoang, vice director of SIE. “But we worry that hunters and wildlife traders could use this good news to exploit this and the many other threatened species there. We have to be careful about giving away too much information.”

Large and medium-sized mammals in the Annamites are threatened by intensive poaching, usually accomplished by the setting of wire snares. This ubiquitous and indiscriminate snaring pressure has driven mammals such as the large-antlered muntjac and saola to the brink of extinction. In 2016, the International Union for Conservation of Nature (IUCN) Red List of Threatened Species changed the large-antlered muntjac’s status from endangered to critically endangered. The IUCN has recommended the urgent need for conservation breeding of the species as a safeguard for the future, while also focusing on in situ conservation efforts at key sites in both Vietnam and Laos.

In addition to large-antlered muntjac, the camera traps captured other endangered vulnerable and threatened species, including Owston’s civet, Germain’s peacock pheasant, crested argus and hog badger. Together, these results indicate that the forests of Lang Biang Biosphere Reserve have experienced less hunting pressure than other areas of the Annamites.

“This preliminary survey demonstrates that Lang Biang Biosphere Reserve could be a key site not just for the survival of the large-antlered muntjac but also for other rare species that have disappeared from other parts of Vietnam,” said Andrew Tilker, doctoral student at the Leibniz Institute for Zoo and Wildlife Research, a member of the Junior Research Group: Biodiversity and Biogeography in Southeast Asia and Global Wildlife Conservation associate conservation scientist. “These photos have captured more than just one individual large-antlered muntjac—they have captured hope for the future for this species and many others.”

The Southern Institute of Ecology (SIE) is a governmental research institution under management of the Vietnam Academy of Science and Technology. SIE’s vision is to produce high quality, innovative research, advocacy, and training products in the field of integrated biodiversity conservation and community development and planning. More information on SIE can be found at http://www.sie.vast.vn/

The Saola Working Group works collaboratively to conserve Saola in nature, and to mobilize Saola as a flagship for conservation of the bio-cultural diversity of the Annamite Mountains as a whole. The Saola Working Group is part of the IUCN Species Survival Commission’s Asian Wild Cattle Specialist Group. The SWG was formed in 2006 in recognition of the need for urgent, focused and coordinated action to save Saola from extinction. Learn more at https://www.savethesaola.org/

The Leibniz Institute for Zoo and Wildlife Research (Leibniz-IZW) is an internationally renowned research institute of the Leibniz Association. With the mission of “understanding and improving adaptability” it examines evolutionary adaptations of wildlife and its resilience to global change, and develops new concepts and measures for conservation. To achieve this, the IZW uses its broad interdisciplinary expertise in evolutionary ecology and genetics, wildlife diseases, reproductive biology and management in a close dialogue with stakeholders and the public.