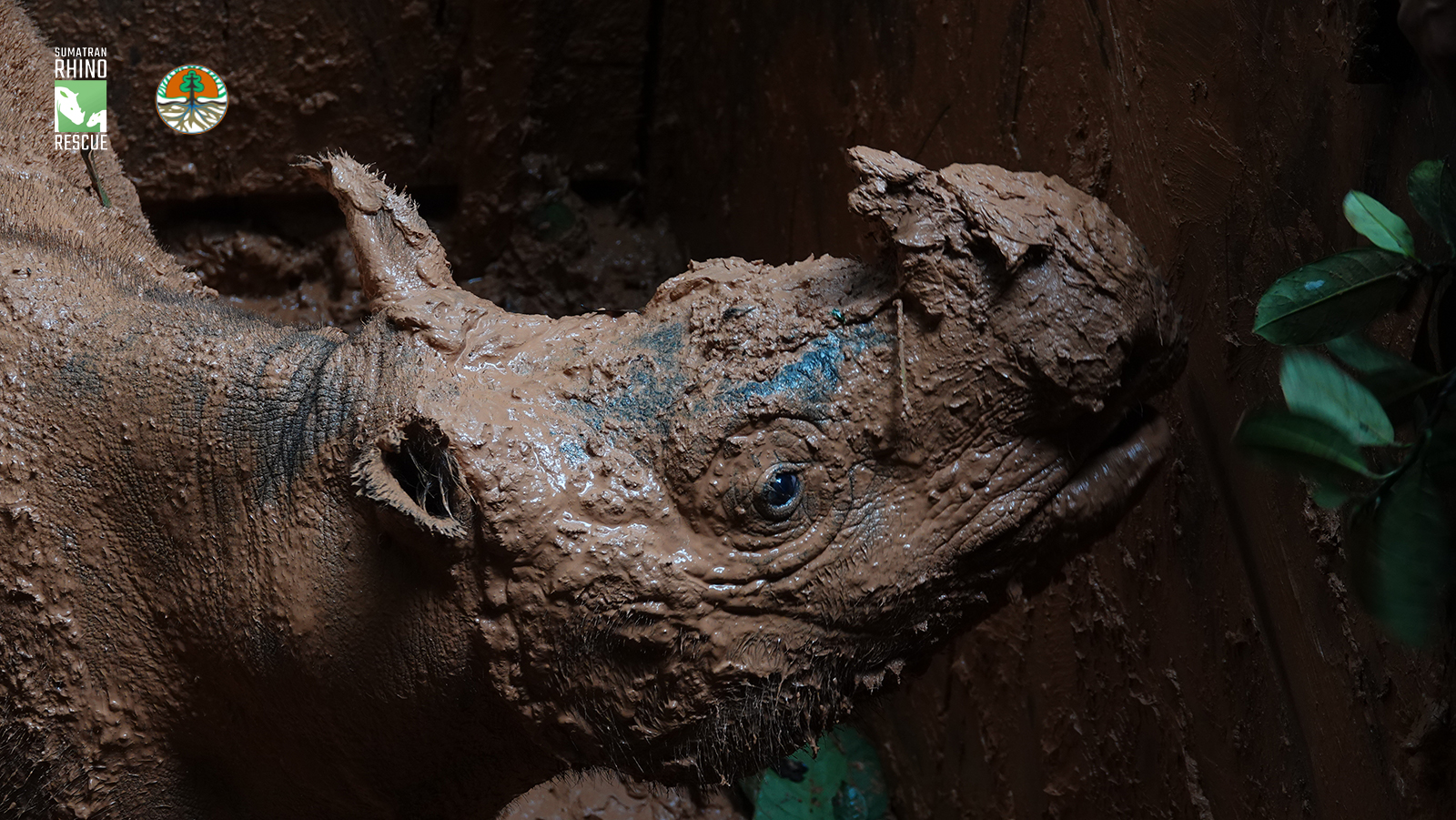 KUTAI BARAT—The Government of Indonesia and Sumatran Rhino Rescue, a groundbreaking alliance of leading international conservation organizations, have successfully rescued and relocated a critically endangered but healthy female Sumatran rhino to a secure facility in Kalimantan. The rescue operation is the first major activity of an expanded conservation breeding program that aims to save the species from imminent extinction and eventually increase populations of Sumatran rhino to numbers that allow them to be returned to the wild.

“The two calves recently born at the Sumatran Rhino Sanctuary in Indonesia show that we can breed this species,” said Barney Long, GWC’s senior director of species conservation. “And now with this capture, we’ve demonstrated that we can do these wild captures safely in support of expanding the national breeding program. We’re excited to scale-up captures so we can bring all isolated individuals together for breeding, which we hope results in a rhino baby boom and a secure future for the species.”

The Sumatran rhinoceros was transported by truck from the rescue site in West Kutai, to a temporary holding facility in Hutan Lindung Kelian Lestari (Kelian Lestari Protected Forest) both in the District Kutai Barat, East Kalimantan Province of Indonesia.

“This translocation exercise is an essential first step in a wider effort to rescue the Sumatran Rhino, as they are now in a critical situation,” said Mr. Wiratno, the DG of Conservation of Biodiversity and Ecosystem, Minister of Forestry and Environment.  “The Government of Indonesia is fully committed not just to the captive breeding effort now underway but to safeguarding the natural habitat of the Sumatran rhino with the hope of eventually re-introducing a healthy population of animals into the wild.”

The Sumatran rhino is one of the most endangered large mammals on the planet. With fewer than 80 Sumatran rhinos left in the world, the species faces a crisis point. After decades of poaching and habitat loss, the greatest threat facing the species is the distance that separates their small populations. Unable to easily find mates, many breeding-age Sumatran rhinos risk infertility as a result of extended isolation. In their current fragmented and dispersed pockets across two vast Indonesian islands, hope for their survival depends on conservationists’ ability to find and safely relocate them to specialized facilities designed for their care.

“The dedication of the Indonesian government to this project, combined with the collaborative spirit that characterizes the Sumatran Rhino Rescue effort and the knowledge built over the last few decades on Sumatran rhinos in captivity and in the wild, allow us to affirm that we have the tools to take this project forward successfully,” said Jon Paul Rodríguez, Chair, IUCN Species Survival Commission. “Careful and patient planning were key in this week’s rescue, qualities that will continue to prove fundamental in the months to come.”

A team of experts led by WWF, a founding Sumatran Rhino Rescue partner, supported the government of Indonesia in the search and rescue operations in Kalimantan, working to ensure that the rhino remained safe and healthy throughout the capture and relocation process.

“There’s still a long road ahead but today the future of the Sumatran rhino is looking brighter,” said Rizal Malik, CEO WWF-Indonesia. “The Sumatran rhino is an integral part of our heritage; we simply can’t stand by and watch the species disappear. We support the Government of Indonesia in taking this bold conservation approach before it’s too late. This particular rhino was in a grave danger due to her degraded habitat. We know that even with years of preparation and some of the greatest experts in rhino conservation these operations can prove risky. But in such dire circumstances, we’re left with little choice. While risks remain for this rhino, with her safe arrival at the sanctuary, we’re cautiously optimistic, and our dedicated team will continue with round-the-clock care as she settles into her new home.“

Over the next weeks and months, a team of veterinarians and animal husbandry experts will monitor and care for this rhino as she adapts to her new surroundings. The team will work to ensure her safety and health in this new environment, at which point they will begin work to determine her breeding viability.

Sumatran Rhino Rescue is a groundbreaking, collaborative approach to save the Sumatran rhino by supporting the Government of Indonesia’s national Sumatran rhino conservation breeding program. The effort is led by the International Union for Conservation of Nature’s Species Survival Commission, in coordination with Global Wildlife Conservation, International Rhino Foundation, the National Geographic Society, and WWF and supported by partners on the ground in Indonesia. Learn more at www.sumatranrhinorescue.org

The International Rhino Foundation is a small, impactful nonprofit that exists to ensure the survival of the world’s five rhino species through conservation and research.  For almost 30 years, the IRF has funded and operated rhino protection and conservation programs in Africa and Asia - with a particular focus on Indonesia.  The IRF built and co-manages the Sumatran Rhino Sanctuary in southern Sumatra, and has led Sumatran Rhino Protection Units for more than 20 years.  The IRF work in areas where conservation is most needed and where precious resources will have the most impact.  At the heart of IRF’s vision is the belief that these magnificent species should endure for future generations, and that protecting rhinos ensures the survival of many other species that share their habitat, including people. For more information, visit www.rhinos.org, Twitter: @rhinosIRF.

International Union for Conservation of Nature

The International Union for Conservation of Nature (IUCN) is a membership Union uniquely composed of both government and civil society organizations. It provides public, private and non-governmental organizations with the knowledge and tools that enable human progress, economic development and nature conservation to take place together. With a network of over 8,000 experts, the Species Survival Commission (SSC) is the largest of the six commissions of IUCN. SSC enables IUCN to influence, encourage and assist societies to conserve biodiversity by building knowledge on the status and threats to species, providing advice, developing policies and guidelines, facilitating conservation planning, and catalysing conservation actions. Learn more at: https://www.iucn.org.

The National Geographic Society is a leading nonprofit that invests in bold people and transformative ideas in the fields of exploration, scientific research, storytelling and education. Through our grants and programs, we aspire to create a community of change, advancing key insights about our planet and probing some of the most pressing scientific questions of our time while ensuring that the next generation is armed with geographic knowledge and global understanding. Our goal is measurable impact: furthering exploration and educating people around the world to inspire solutions for the greater good. For more information, visit www.nationalgeographic.org.

WWF is one of the world’s largest and most respected independent conservation organizations, with over 5 million supporters and a global network active in more than 100 countries and territories. WWF's mission is to stop the degradation of the Earth's natural environment and to build a future in which humans live in harmony with nature, by conserving the world's biological diversity, ensuring that the use of renewable natural resources is sustainable, and promoting the reduction of pollution and wasteful consumption. Visit www.panda.org/news for the latest news and media resources and follow us on Twitter @WWF_media