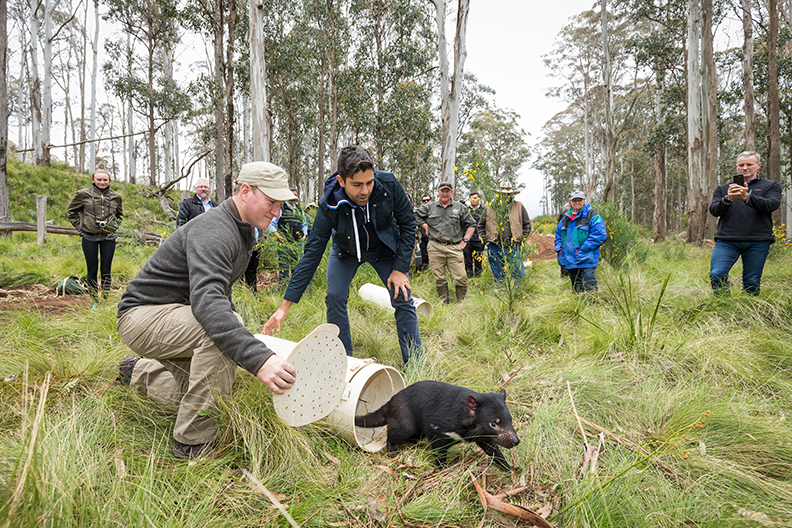 The future of the endangered Tasmanian devil became a little brighter Nov. 9 with the release of 20 captive Tasmanian devils into a new 64-hectare semi-wild fenced sanctuary in the Barrington Tops hills of southeastern Australia. The release marks the grand opening of Aussie Ark, a new Global Wildlife Conservation-supported initiative that aims to safeguard some of Australia’s most imperiled mammals and to ultimately return them to the wild.

“The opening of Aussie Ark is an historic event that will go far in preventing the extinction not only of the Tasmanian devil, but numerous other endangered mammals at risk of extinction,” said Don Church, GWC president. “Global Wildlife Conservation is proud to support our partner Devil Ark in expanding its innovative model through Aussie Ark and ensuring the protection of Australia’s incredible and unique mammal community.”

Hollywood actor Adrian Grenier and GWC Chief Scientist and CEO Wes Sechrest joined Aussie Ark in helping release the devils into their new sanctuary. Grenier is co-founder of GWC partner Lonely Whale, which acts as both a facilitator between nonprofits, brands, policymakers and as an incubator for impactful ideas rooted in education and awareness to drive market and policy change for ocean health.

As an expansion of Devil Ark, which includes 14 semi-wild fenced areas home to nearly 200 Tasmanian devils, Aussie Ark currently protects more than 100 hectares of land, including the new 64-hectare conservation area. When complete, Aussie Ark will be 2,000 hectares in size, with the capacity to provide homes to more than 1,000 endangered Australian mammals.

With a vision of returning various marsupial species to the eastern highlands of Australia, Aussie Ark will provide on-the-ground conservation on a scale never before attempted by focusing on the protection of key species in the feral-proof fenced reserve. The first step of the project will be to establish insurance populations for these species, which contribute to healthy ecosystems in eastern Australia, including endangered eastern quolls, potoroos, bandicoots and more. The area is also slated to provide a safe haven for species native to the area such as the greater glider, spotted tail quoll and Hasting’s River mouse. Through Aussie Ark, these animals will be kept safe in an environment that provides wild conditions.

“Protected areas like Aussie Ark are necessary tools for conservation,” said Tim Faulkner, general manager of the new Aussie Ark. “Without protecting our wildlife from key threats like feral pests such as the fox and cat, we’ll have no wildlife left for future generations. Australia has the worst mammal extinction rate on the planet and it’s our job to stop that from continuing to happen.”

Australia is home to more species than any other developed country with most of the nation’s wildlife found nowhere else in the world. Yet 10 percent of Australia’s mammals have gone extinct since European colonization and an additional 21 percent are predicted to go extinct at a rate of 1 to 2 species per decade without swift conservation action. Introduced cats and foxes are the primary drivers of this extinction crisis.

As apex predators, Tasmanian devils have historically kept cats and foxes at bay, helping to prevent the extinction of native mammals and other vertebrates. Once widespread in Australia, however, Tasmanian devils have been nearly wiped out by Devil Facial Tumor Disease, one of the only cancers known to spread as a contagious disease. More than 90 percent of wild Tasmanian devils have disappeared since 1996 and today the insurance population at Devil Ark is more important than ever.

Aussie Ark is an innovative conservation initiative committed to delivering results for some of Australia’s most imperiled species. The vision of Aussie Ark is to establish a robust insurance population of 7 Australian threatened, native mammal species such as the Tasmanian Devil, Eastern Quoll and Bandicoot, suitable for semi-wild release into large, predator proof fenced release sites in the Barrington Tops, for eventual reintroduction to the wild. Learn more at http://www.aussieark.org.au