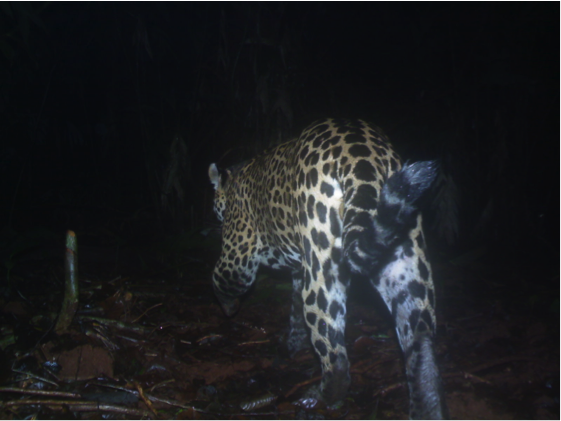 New York, NY – New data have renewed concerns about the potential impact of the proposed Nicaraguan Interoceanic Canal on the future of the jaguar and other species if proper mitigation actions are not taken.

Gathered by Global Wildlife Conservation (GWC) and Panthera, in collaboration with Michigan State University (MSU), four years of data have allowed researchers to identify two significant genetic pathways for jaguars and other species that may be bisected by the Canal. Without these pathways, three of Nicaragua’s rarest large mammal species, jaguars, white-lipped peccaries and Baird’s tapirs, will struggle to find other individuals in neighboring populations for breeding, which is key to conserving the genetic diversity of these species and therefore healthy populations.

“Bisecting these pathways could endanger the survival of some of Nicaragua’s most emblematic species,” said Dr. Wes Sechrest, Chief Scientist and CEO of GWC. “We all have a role to play in ensuring the future of the wildlife we share our planet with; working to ensure that development projects have the smallest environmental impact possible must be a top priority of governments and companies globally.”

In 2013, the Hong Kong-based Nicaraguan Canal Development Company (HKND) received a concession to build the approximately 170-mile long interoceanic canal. HKND defined the route of the proposed canal in 2014 and is set to begin major construction at the end of 2015. The proposed canal is designed to accommodate the world’s largest shipping vessels, including those unable to pass through the Panama Canal, and canal officials predict that the megaproject will double Nicaragua’s Gross Domestic Product (GDP). Researchers at GWC and Panthera, the global wild cat conservation organization, ran analyses to identify the key genetic pathways for jaguars, Baird’s tapirs, and white-lipped peccaries in the proposed canal zone after obtaining a camera trap photo of a jaguar on the proposed canal route in November of 2014. The camera trap photo was taken in the indigenous Rama community, Bangkukuk, one of the epicenters of proposed canal development on the Caribbean Coast of Nicaragua.

As recently as 15 years ago, the indigenous territories of Caribbean Nicaragua boasted some of the largest forests in the Central American isthmus. Since then, illegal cattle ranching has devastated huge expanses of these forests, leaving relatively little habitat for wildlife and threatening the food security and cultural survival of the indigenous and afro-descendant peoples who hold legal, communal tenure to the land. Most remaining viable habitat, and the only remaining reserves of significant size, are found in and around the indigenous and afro-descendant communities. The two pathways that GWC and Panthera have identified are both within indigenous lands and are the only active portions of the Mesoamerican Biological Corridor in this region of Nicaragua.

Researchers from GWC and Panthera submitted a technical report to the Nicaraguan authorities with a list of suggestions and possible mitigation actions that could prevent the loss of wildlife dispersal and genetic connectivity in the context of canal construction. The report emphasizes the acute threat posed by the still advancing cattle ranching frontier, and the importance of prioritizing actions to address it.

“Even in the absence of canal construction, without increased efforts to address the expanding cattle ranching frontier, the country’s remaining Caribbean reserves will effectively disappear within the next 10-15 years,” said Sandra Potosme, Panthera’s Nicaragua Coordinator. “In our opinion, if we are to maintain genetic connectivity for these three threatened and ecologically important species, it is not only important to include environmental mitigation actions specifically designed to support their dispersal through the canal zone, but critical for all of us involved in Nicaraguan conservation to work closely with local and national authorities to help tackle the cattle ranching invasion and fully invest in the conservation of the country’s indigenous lands and protected areas.”

The IUCN Red List classifies jaguars as Near Threatened globally, but they are rare in Nicaragua with a population of fewer than 500. Baird’s tapirs are close to Critically Endangered in Central America and many biologists believe that range-wide hunting has made the white-lipped peccary the most threatened mammal in Central America. All three play unique and important ecological roles.

“Nicaragua’s government is among eight countries throughout the Americas that have signed formal agreements with Panthera to recognize the critical importance of the international jaguar corridor and to help protect it,” said Dr. Alan Rabinowitz, Panthera’s CEO. “We are optimistic that we can work together to make a concerted, science-based effort to conserve genetic connectivity for wildlife in the context of the proposed canal.”

Read the press release in Spanish.

Panthera, founded in 2006, is devoted exclusively to the conservation of wild cats and their ecosystems. Utilizing the expertise of the world’s premier cat biologists, Panthera develops and implements global conservation strategies for the most imperiled large cats – tigers, lions, jaguars, snow leopards, cheetahs, cougars and leopards. Representing the most comprehensive effort of its kind, Panthera works in partnership with local and international NGOs, scientific institutions, local communities and governments around the globe. Visit Panthera

Global Wildlife Conservation protects endangered species and habitats through science-based field action. GWC envisions a world with diverse and abundant wildlife and are dedicated to ensuring that the species on the verge of extinction are not lost. The global organization brings together scientists, conservationists, policymakers and industry leaders to ensure a truly collaborative approach to species conservation. Learn more at globalwildlife.org

*The Amphibian Survival Alliance is a partner of Global Wildlife Conservation and Candace M. Hansen-Hendrikx is currently filling in for GWC’s Media Manager.