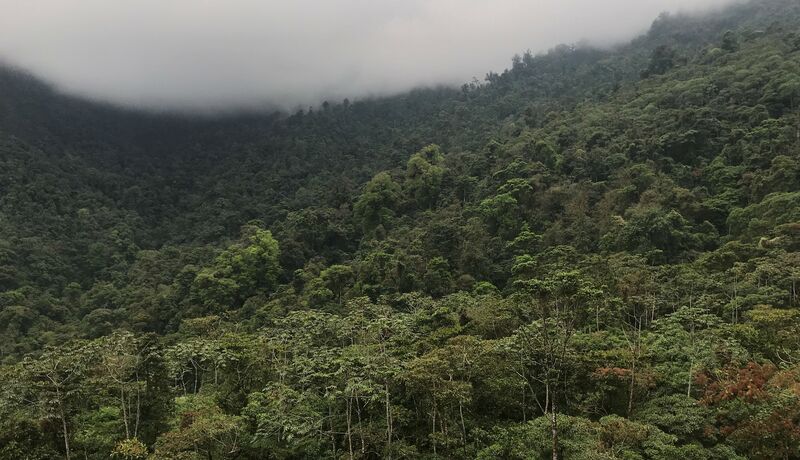 This holiday season, Global Wildlife Conservation is offering the chance to give the gift of a healthy planet through a beta initiative with www.conserve.org, where site visitors can permanently conserve an acre of cloud forest in the Guatemala highlands for $84. The novel project launches just in time for the holidays—and last-minute shopping—today, December 19.

Guatemala’s northern highlands are one of the last large, intact and unprotected cloud forests in Central America, and among GWC’s priority wildlands. At 49,000 acres, the northern highlands forest stores about 4 million tons of above-ground carbon, all of which would be released into the atmosphere if fully deforested. It is also home to more than 200 species of trees, 266 bird species (including 45 migratory bird species), 70 mammal species, and at least 39 species that are considered of conservation concern. Yet ongoing deforestation is a pervasive problem here. Small-scale farmers and illegal timber poachers continue to cut down trees on land they do not own. Every year, the northern highlands loses more and more of its virgin forest to clear-cutting.

“Every single acre that we can protect is going to make a difference not only for the diverse community of wildlife species that live here, but for this ecosystem to continue to function as a part of the natural solution to the climate crisis,” said Don Church, Global Wildlife Conservation president. “This is the perfect gift to give to anyone who cares about the future of our planet and wants to do permanent good by protecting an important wildland.”

Supporters can view the 360-degree photos of each acre at www.conserve.org, select an acre and then make a donation to protect an acre in their own name or someone else’s. Donors and gift recipients will receive information about the natural value of the property and the coordinates of the acre. GWC is donating legal, management and administration costs for the conservation project and www.conserve.org is paying for credit card fees. One-hundred percent of the donations will go directly to purchasing the land.

GWC is one of four NGOs supporting conservation in the northern highlands. The others are: Cloud Forest Conservation Initiative and FUNDAECO (both local Guatemalan organizations), and Rainforest Trust (based in the United States). These four non-profit organizations have previously collaborated on projects in Guatemala, and are working together through the purchase process, the registration of the parcel as a national reserve, and the management of the forest in a pristine state. GWC and Rainforest Trust both have a 4-star rating on Charity Navigator, the highest possible rating for organizational charity efficiency in financial health, accountability and transparency.

Guatemala’s northern highlands is one of the last large, intact and unprotected cloud forests in Central America, located in the highlands of western Guatemala. The cloud forest, also called a montane rainforest, is a highland tropical forest characterized by frequent low-level cloud cover. This region is near the Cuchumatanes Mountains, which lie to its west, and the Sierra de Chama. As a watershed, the northern highlands is defined on its west side by the Putul River and on its east side by the Chixoy River, the headwater of the Usumacinta River, which empties into the Gulf of Mexico.

This northern highlands forest is ecologically diverse, containing extensive old-growth trees such as the endangered Guatemalan walnut tree, massive Mexican elms with diameters of more than 10 feet, and threatened species like broadleaf Podocarpus conifers and the Guatemalan fir. It is home to at least 200 species of trees, 266 species of birds with 45 migratory species, 70 species of mammals, and at least 39 species that are considered of conservation concern, including jaguar, puma, Guatemalan black howler monkey, a subspecies of Geoffroy’s spider monkey, and Guatemala’s national symbol, the resplendent quetzal. Ongoing surveys of the northern highlands are also resulting in the discovery of species new to science. As surveys continue, scientists anticipate the discovery of many new insects, salamanders and frogs, plants and fungi. For its discovery potential alone, this forest is one of the most ecologically important areas remaining to be protected in the Americas.

Protecting forests is key to mitigating human-caused climate change. At least 30 percent of the solution to climate change is keeping carbon out of the atmosphere by ensuring that it remains naturally sequestered both in the ground and in trees and other plants. At 49,000 acres, the northern highlands forest is storing approximately 4 million tons of above-ground carbon, which would be released into the atmosphere if fully deforested. The forest is also storing carbon underground that has been audited to have the highest carbon density per square foot in Central America. Ensuring that the forest remains unlogged and intact will keep the sequestered carbon in the ground and out of the atmosphere.

The northern highlands forest is surrounded by 13 villages that depend on the limestone mountain forest for clean drinking water. Community enthusiasm and backing is central for conservation to be a success. FUNDAECO, the lead organization working in the northern highlands begins any conservation project with the people. The local secondary partner, CFCI, has been providing sustainable business support for five years in the area, largely supporting Macadamia nut tree farms by providing free trees from Lawrence Gottschamer at Valhalla in Honduras. In addition, Guatemalan Nobel Peace Prize Winner Rigoberta Menchu, who is originally from an area near the forest, signed a Letter of Understanding in February of 2018 between her foundation and FUNDAECO to support the conservation work in the northern highlands.