Thirty Postcards Will Be Featured in an E-Book 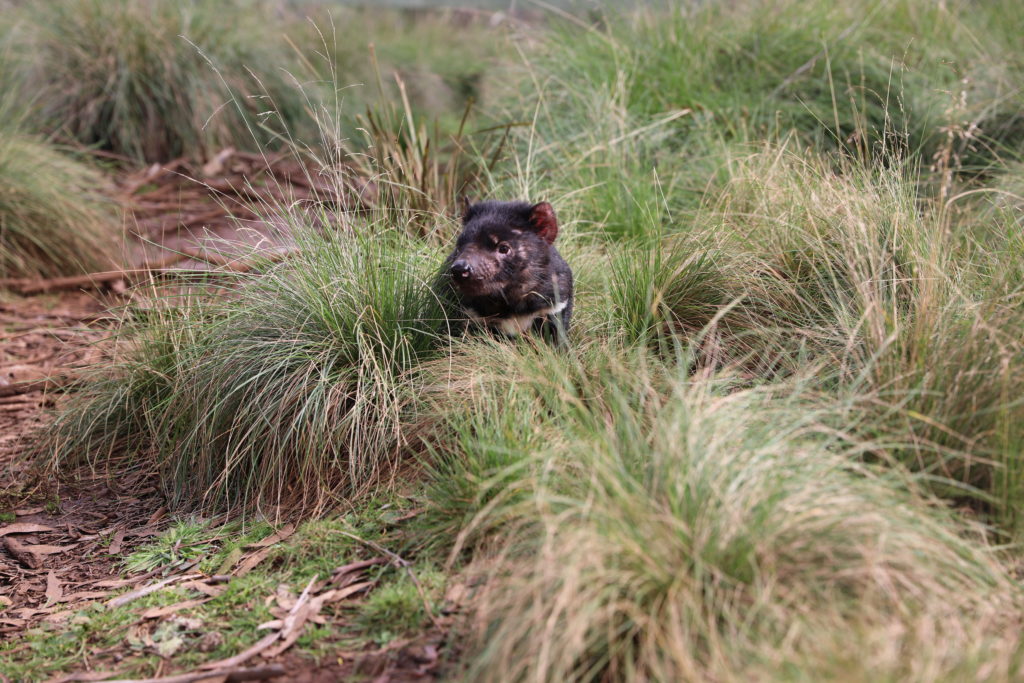 Kids can write to Lenny, the timid one, or one of the three other featured devils. (Photo by Aussie Ark)

A little note of encouragement can help with any big transition. Global Wildlife Conservation, Aussie Ark and WildArk are asking children ages 5-to-10 years old to write digital postcards of encouragement to Tasmanian devils who are making a big transition. Twenty-six Tasmanian devils total have been reintroduced to the wild on mainland Australia this year. It’s the first time the species has been living in the wild on the mainland in 3,000 years. Kids can send “devil-grams” to the largest carnivorous marsupials to cheer on their historic return to the land down under.

Kids can learn about the personalities of four of the Tasmanian Devils living in a 400-hectare (nearly 1,000-acre) wildlife sanctuary on Barrington Tops on Global Wildlife Conservation’s website. They can write to Lisa, a bold female; Lenny, a timid male; Jacksen, a sassy male; and Skittles, a hangry female. After reading about the devils, who are being monitored and tracked by Aussie Ark, prospective pen pals can download a devil-gram postcard. The devil-grams have space for original artwork and a message. Kids can scan or take a photo of their finished digital devil-grams and e-mail them to their chosen devil.

Thirty of the most creative postcards that also demonstrate the author did some research about Tasmanian devils will be published in an e-book commemorating the reintroduction of the devils. The deadline for submissions for the e-book is Nov. 13 at 12 a.m. ET.

Kids and fans of the Tasmanian devils can check in on the devils to see how they are faring in the wild. Updates and photos will be shared periodically on https://devilcomeback.org.

"Many kids, just like these Tasmanian devils, are adjusting to a whole new world right now. But kids and these devils are amazingly resilient,” said Don Church, Global Wildlife Conservation president. “By tapping into the incredible creativity of the next generation of conservationists, we can give these devils a special welcome from kids around the globe. Kids have a unique appreciation of wildlife--one based in wonder and awe--and we're looking forward to seeing what they come up with to help celebrate this great news from the land down under.”

Tasmanian devils vanished entirely from mainland Australia in large part because they were outcompeted by introduced dingoes, which hunt in packs. Dingoes never made it to Tasmania, but across the island state, a transmissible, painful and fatal disease called Devil Facial Tumor Disease (DFTD)—the only known contagious cancer—decimated up to 90 percent of the wild population of Tasmanian devils. Just 25,000 devils are left in the wild of Tasmania today.

For the last decade, the Aussie Ark team has been building an insurance population of Tasmanian devils and learning everything they can about the animals, including about their reproductive physiology, behavior, and ecological needs, all leading up to the reintroduction, which took place on September 10 and followed a successful assisted trial release with 15 Tasmanian devils.

“In 100 years, we are going to be looking back at this day as the day that set in motion the ecological restoration of an entire country,” said Tim Faulkner, president of Aussie Ark, which has been working with Tasmanian devils for more than 10 years with the goal of someday returning them to the wild. “Not only is this the reintroduction of one of Australia’s beloved animals, but of an animal that will engineer the entire environment around it, restoring and rebalancing our forest ecology after centuries of devastation from introduced foxes and cats and other invasive predators. Because of this reintroduction and all of the hard work leading up to it, someday we will see Tasmanian devils living throughout the great eastern forests as they did 3,000 years ago.”

Aussie Ark selected the particular devils for reintroduction based on those most suitable to breed with one another without any inbreeding. The wild sanctuary will prevent the spread of disease, feral pests, noxious weeds and fire, which was catastrophic earlier this year for the country. The wild sanctuary will also keep cars out, ensuring that the devils learn not to associate cars with food—an association that could be deadly when they are more widely released.

Aussie Ark’s Tasmanian devil breeding program is the most successful conservation breeding facility for the endangered species on mainland Australia. Aussie Ark founded a Tasmanian devil breeding program in 2011 with 44 individuals. Today, it's home to more than 200, which is about 50 percent of the entire captive insurance population spread across mainland Australia. Over the years, more than 390 devils have been born and raised at Aussie Ark in a way that encourages and fosters their natural behaviors, helping ensure that they maintain all the skills they need to survive in the wild.

Not only does the reintroduction bode well for the recovery of the Tasmanian devil, but as native apex predators and the world’s largest carnivorous marsupials, the animals help control feral cats and foxes that threaten other endangered and endemic species. And because they are scavengers, they help keep their home clean and free of disease. The Tasmanian devil is one of seven cornerstone species critical to Australia’s ecosystem that Aussie Ark plans to reintroduce to the wild sanctuary in the coming years, all chosen to help restore the natural balance: Eastern quoll, Brush-tail rock wallabies, Rufous bettong, long-nosed potoroo, parma wallabies and southern brown bandicoots.

“The re-introduction of devils to mainland Australia is a game-changer for conservation in this country, not only building a robust, genetically healthy population outside of Tasmania, but also paving the way for future introductions that the Aussie Ark team are already mapping out,” said Mark Hutchinson, co-founder of WildArk. “Having partnered with Aussie Ark and GWC on the Koala Comeback Campaign after the bushfires this year, we’ve witnessed first-hand their commitment to ecological restoration in Eastern Australia and we couldn’t be prouder to now support the Devil Comeback. The groundwork is being laid for a broad, nationwide effort to rewild Australia and help our little critters find their niche again.”

This is the first of three planned reintroductions. In the next two years, Aussie Ark will do two additional releases of 20 devils each. The animals will be monitored through regular surveys, radio collars fit with transmitters, and camera traps. This will give the researchers the opportunity to learn about how the devils are faring, where they are claiming territory, what challenges they are facing, what they are eating, and whether they’re reproducing. All of this information will help to inform future releases, including in Tasmania and elsewhere on the mainland, to continually refine the process.

As a not for profit organisation, Aussie Ark raises the necessary funds to continue its ambitious vision. Investment allows for the construction of captive facilities and predator-proof fencing on semi-wild parcels of land. Aussie Ark is a registered environmental organisation and charitable institution under the Australian Charity and Not-for-Profit Commission. Aussie Ark has deductible gift recipient status (DGR status) and is registered for GST purposes. More information at www.aussieark.org.au

WildArk is a global not-for-profit conservation effort that was founded in 2016. Our mission is to promote and support activities that educate, enable, provide resources or inspire humanity to sustainably conserve, protect or restore the environment and the world’s ecosystems, natural resources, wildlife and wild places. The mission is manifested through positive storytelling, scientific research, supporting wildlife conservation and investing in space for the wild.  Learn more at www.wildark.org.