International Conservation Organizations Team Up to Save the Sumatran Rhino 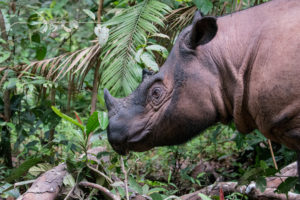 Today, in advance of World Rhino Day on September 22, five of the world’s leading international conservation organizations announced the formation of a groundbreaking strategic partnership to save the critically endangered Sumatran rhinoceros from extinction. The effort, established to support the government of Indonesia’s national Sumatran rhino conservation breeding program, is led by the International Union for Conservation of Nature’s Species Survival Commission, in coordination with Global Wildlife Conservation, International Rhino Foundation, National Geographic Society, and WWF.

With fewer than 80 Sumatran rhinos left in the world, the species is in crisis. Without intervention, the Sumatran rhino will soon go extinct. After decades of poaching and habitat loss, the greatest threat facing the species is the distance that separates their small  populations. Unable to easily find mates, many breeding age Sumatran rhinos risk infertility as a result of extended isolation. In their current fragmented and dispersed pockets across two vast Indonesian islands, hope for their survival depends on conservationists’ ability to find and safely relocate them to specialized facilities designed for their care.

“Rescuing the Sumatran rhino from extinction is an extremely high priority for the government of Indonesia,” said Wiratno, Director General of Nature Conservation and Ecosystems, Ministry of Environment and Forestry, Government of Indonesia. “Working with species conservation experts, and with local authorities and communities to support the campaign and raise awareness, we have prepared an Emergency Action Plan for the rhino that calls for the establishment of a national conservation breeding program. The Sumatran Rhino Rescue project will be of critical importance in this effort and we welcome the support of this coalition of organizations from around the world.”

Since the dawn of the conservation movement, individual organizations and researchers have worked to save and protect species around the world. However, conservation organizations sometimes end up competing with each other for funding, resources, expertise, and access to the animals they are trying to save. Sumatran Rhino Rescue brings international and Indonesian NGOs together to create and implement a collaborative plan to save the species, working hand-in-hand with implementing partners on the ground and coordinating closely with leaders in government to remove these traditional barriers to success.

“Our shared goal of establishing a conservation breeding program for the species by bringing together animals unable to breed in the wild will lead to what I hope to see in my lifetime: a next generation of Sumatran rhinos,” said Barney Long, senior director of species conservation at Global Wildlife Conservation.

“Decades of research, training and scientific advancements mean this alliance not only offers the best chance of survival for the Sumatran rhino, it is the only chance,” said Rizal Malik, CEO of WWF-Indonesia.

“We are harnessing our more than 22 years of experience maintaining and breeding Sumatran rhinos in captive settings and are using techniques first perfected at the Cincinnati Zoo & Botanical Gardens that have been implemented at the Sumatran Rhino Sanctuary in Way Kambas National Park,” said Susie Ellis, executive director of the International Rhino Foundation. “IRF is confident that this project can help to turn around the dire situation facing Sumatran rhinos.”

An effort this ambitious will require significant investment. To kick-start a three-year fundraising effort, each partner organization has committed $1 million in support for a nearly $30 million emergency action fund for the Sumatran rhino.

“This is our last opportunity to raise the profile of this lesser-known species of rhino and preserve over 20 million years of evolutionary history,” said Jonathan Baillie, executive vice president and chief scientist at the National Geographic Society. “Now is the time to take action together.”

For more information and to learn how to contribute, visit www.sumatranrhinorescue.org

About the International Rhino Foundation

The International Rhino Foundation is a small, impactful nonprofit that exists to ensure the survival of the world’s five rhino species through conservation and research. For almost 30 years, we have funded and operated rhino protection and conservation programs in Africa and Asia - with a particular focus on Indonesia - working in areas where conservation is most needed and where precious resources will have the most impact. At the heart of IRF’s vision is

the belief that these magnificent species should endure for future generations, and that protecting rhinos ensures the survival of many other species that share their habitat, including people. For more information, visit www.rhinos.org, Twitter: @rhinosIRF.

About the International Union for Conservation of Nature

The International Union for Conservation of Nature (IUCN) is a membership Union uniquely composed of both government and civil society organizations. It provides public, private and non-governmental organizations with the knowledge and tools that enable human progress, economic development and nature conservation to take place together. With a network of over 8,000 experts, the Species Survival Commission (SSC) is the largest of the six commissions of IUCN. SSC enables IUCN to influence, encourage and assist societies to conserve biodiversity by building knowledge on the status and threats to species, providing advice, developing policies and guidelines, facilitating conservation planning, and catalysing conservation actions. Learn more at: https://www.iucn.org.

About the National Geographic Society

The National Geographic Society is a leading nonprofit that invests in bold people and transformative ideas in the fields of exploration, scientific research, storytelling and education. Through our grants and programs, we aspire to create a community of change, advancing key insights about our planet and probing some of the most pressing scientific questions of our time while ensuring that the next generation is armed with geographic knowledge and global understanding. Our goal is measurable impact: furthering exploration and educating people around the world to inspire solutions for the greater good. For more information, visit www.nationalgeographic.org.

WWF is one of the world’s largest and most respected independent conservation organizations, with over 5 million supporters and a global network active in more than 100 countries and territories. WWF's mission is to stop the degradation of the Earth's natural environment and to build a future in which humans live in harmony with nature, by conserving the world's biological diversity, ensuring that the use of renewable natural resources is sustainable, and promoting the reduction of pollution and wasteful consumption. Visit www.panda.org/news for the latest news and media resources and follow us on Twitter @WWF_media