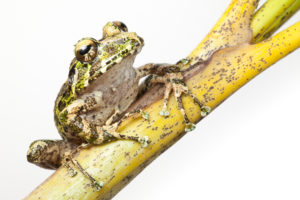 In an historic move, Global Wildlife Conservation (GWC) has joined forces with several partners to establish the first private nature reserve in Haiti. The project—in partnership with Rainforest Trust, Temple University, Haiti National Trust and local NGO Société Audubon Haiti (SAH)—launched this week with the final acquisition of more than 1,200 acres on Grand Bois mountain, home to a remarkable 68 vertebrate species. This includes many species threatened with extinction, such as Ekman’s magnolia tree, the yellow cave frog and the Tiburon streamfrog.

“With less than one percent of Haiti’s original forest left, the country is on the verge of a potential ecological collapse,” said GWC Chief Scientist and CEO Wes Sechrest, who is also on Haiti National Trust’s board of trustees. “We knew that we needed to take action to protect the country’s staggering diversity of unique and threatened species, many of which are found only in Haiti. Global Wildlife Conservation has partnered with Haiti National Trust to directly protect, manage and restore this high-priority conservation site in an effort to begin to turn the tide of centuries of unregulated environmental destruction.”

S. Blair Hedges, director of Temple University’s Center for Biodiversity, in collaboration with Société Audubon Haiti President Philippe Bayard, led two expeditions to Grand Bois during the last seven years. The team documented 68 species of vertebrates, including 16 amphibian species, giving this area the distinction of being home to one of the largest groupings of frog species anywhere in the Caribbean.

One of the species, the Tiburon streamfrog, had not been seen in four decades despite intensive search efforts. The stream frog is a unique lost species that made an evolutionary reversal to an aquatic lifestyle after its ancestors evolved traits for living in the forest. The expedition team discovered three new frog species, all of which the IUCN Red List of Threatened Species will likely classify as critically endangered once they have been scientifically described.

Mirroring what is happening across Haiti, Grand Bois’s forests are being cut for building materials, slash-and-burn agriculture and charcoal. At least 50 percent of the original forest on Grand Bois, however, is still intact above 1,000 meters. The expedition identified Grand Bois as a biodiversity hotspot and in response, the government of Haiti declared it a national park in 2015, Parc National Naturel de Grand Bois, recognizing it as a priority for conservation and confirming the critical need to acquire and protect the area. The local community has been incredibly supportive of maintaining the natural ‘water tower’ of the forested mountain, as nearby peaks have been deforested, resulting in landslides and lack of controlled and clean water in natural forests.

“That Grand Bois and two other areas were named as national parks based on our work has been very gratifying,” Hedges said. “Now with funding from Global Wildlife Conservation and Rainforest Trust, we are beginning the process of land purchase and management to build a network of private nature reserves in the country.”

Repeated scientific expeditions have identified Haiti’s 12 remaining hotspots for wildlife diversity, of which Grand Bois was considered the highest conservation priority because of existing forest habitat and imminent threats. Haiti National Trust is working to implement a forest management and restoration plan for Grand Bois Nature Reserve, with funding from GWC and Rainforest Trust, and to raise support to build the network of private nature reserves.

“When I first landed on Grand Bois mountain with Professor Hedges, I immediately thought that a new strategy had to be found to preserve the plants, animals, and ecosystem services such as clean water and protection from flooding,” said Bayard who, together with Hedges, founded Haiti National Trust to preserve the country’s natural environment and biodiversity. “The species will never come back if we lose them.”

Grand Bois is found in Haiti’s Massif de la Hotte mountain range, the number one priority conservation site in the country and one of the most important sites for amphibians in the world. Because 19 critically endangered amphibian species are restricted to this single site globally, Massif de La Hotte has been recognized as an Alliance for Zero Extinction site. It is also a Key Biodiversity Area, a nationally identified site of global significance for biodiversity.

This work was made possible by a generous donation from the Sheth Sangreal Foundation.

Haiti National Trust (HNT) works to protect the environment and biodiversity of Haiti for future generations through land purchase and management. We believe that biological diversity must be saved because of its intrinsic value and importance for humanity. Healthy forests secure soil for crops, stabilize drinking water, and keep coastal communities and reefs alive and thriving. We engage local communities to help us maintain, protect, and expand the critical ecosystems of Haiti. We are a non-profit charity. Visit www.HaitiTrust.org

Rainforest Trust is a leading international conservation organization that has been steadfast in its mission for 30 years to save endangered species through the purchase and protection of imperiled tropical habitats in partnership with local partners and communities. Since its founding in 1988, Rainforest Trust has helped protect over 18 million acres of rainforest and other tropical habitats in more than 125 project sites around the world. Presently, Rainforest Trust is working to establish a network of over 190 protected areas toward its goal of strategically protecting 50 million acres by 2020. Rainforest Trust has a 4-star rating from Charity Navigator, and 100 percent of project gifts directly fund vital conservation action. For more information, visit www.RainforestTrust.org