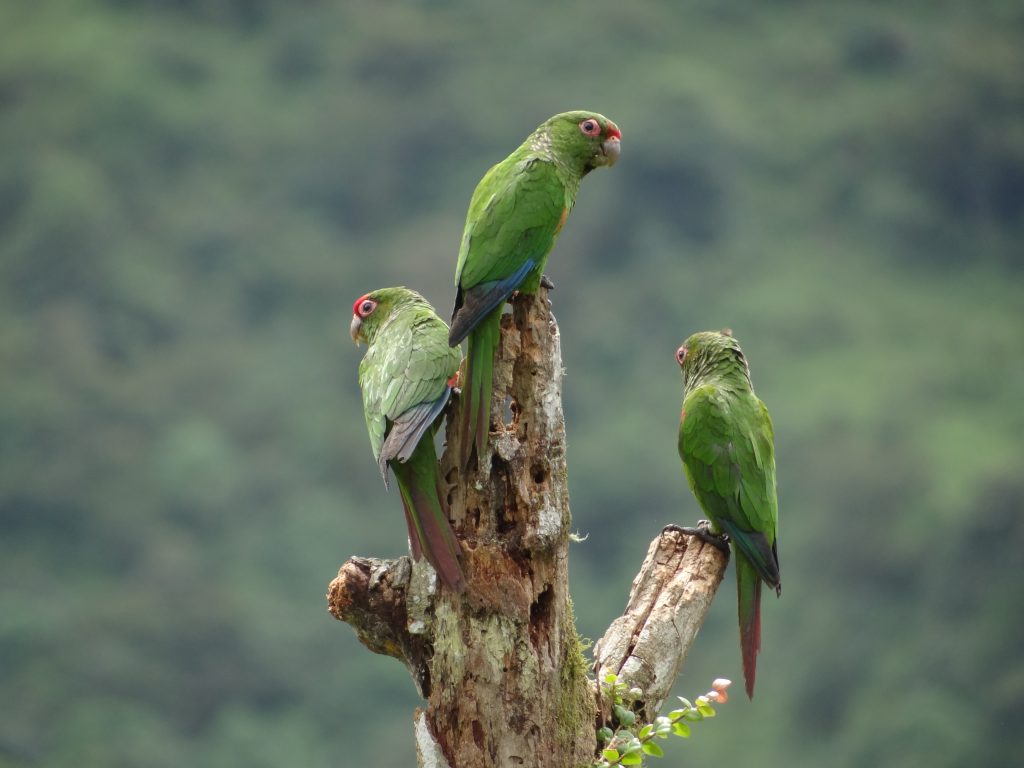 In good news for several globally threatened bird species, the nonprofit conservation group Fundación Jocotoco—with the financial support of Global Wildlife Conservation and close GWC partner Australian Reptile Park—has expanded its Buenaventura Reserve in Ecuador. The reserve is the sole protected area for the endangered El Oro parakeet, which numbers fewer than 1,000 individuals and is found only on the western slope of the Andes in Southwestern Ecuador. American Bird Conservancy and World Land Trust, in addition to other donors, played a pivotal role in securing the land.

“This reserve is a biological jewel, not just for birds but for amphibians and many other species,” said Mike Parr, American Bird Conservancy’s chief conservation officer. “This is a terrific example of how conservation gets done when groups work together.”

In the first quarter of 2017, the partners were able to purchase two tracts of critical habitat to add to the existing reserve, which is the only protected area in the region for 15 globally threatened bird species, including the El Oro parakeet, long-wattled umbrellabird, Pacific royal flycatcher and the rare El Oro tapaculo. The first parcel, totaling 68 acres, was acquired in January 2017. The second site—a private inholding of 31 acres located within the boundary of the reserve—was purchased in March 2017. Acquiring this second tract not only protects access to the central part of the reserve, it preserves an important foraging area for the endangered gray-breasted hawk.

“Although a primary goal of my Big Year was to raise awareness for the plight of the Tasmanian devil and Australia’s other imperiled wildlife, it was important to me that I look to the Americas when offsetting my Big Year’s carbon footprint,” Weigel said. “I wanted Australian Reptile Park to support a project that benefited some of the migratory birds that I enjoyed during my quest in North America.”

One of the species protected at the reserve, the El Oro parakeet, managed to elude discovery for many years despite its eye-catching colors. The species was first discovered in 1980 and only officially described in 1988. Threats to these birds include habitat loss and fragmentation. Many suitable nesting trees are harvested for building materials and cut down to create cattle-grazing pasture, practices that have been shown to limit parakeet populations.

Conservation efforts on the parakeet’s behalf at Buenaventura are producing results. The just-concluded breeding season produced at least 55 El Oro parakeet fledglings from 22 artificial nest boxes installed at the reserve. In addition to its rare birdlife, Buenaventura harbors several recently described amphibian species currently known only from sightings at the reserve.

“Protecting this habitat is clearly having a direct impact on the survival of this special bird,” said Wes Sechrest, GWC chief scientist and CEO. “We’re thrilled to play a role not only in the recovery of the El Oro parakeet, but also in the protection of all of the wildlife species that call Buenaventura home.”

The expansion of the reserve was also made possible by the generous support of the Mohamed bin Zayed Species Conservation Fund, the Robert W. Wilson Charitable Trust, and Diane and Richard Huxtable, as well as a number of individual donors.

American Bird Conservancy is dedicated to conserving birds and their habitats throughout the Americas. With an emphasis on achieving results and working in partnership, we take on the greatest problems facing birds today, innovating and building on rapid advancements in science to halt extinctions, protect habitats, eliminate threats, and build capacity for bird conservation.

Fundación Jocotoco is an Ecuadorian nongovernmental organization established in 1998 to protect land of critical importance to the conservation of Ecuador’s endangered birds and associated biodiversity. Jocotoco primarily achieves this by purchasing lands and managing them as ecological reserves.

World Land Trust (WLT) is an international conservation charity, which protects the world’s most biologically important and threatened habitats acre by acre. Since its foundation in 1989, WLT has funded partner organizations around the world to create reserves and give permanent protection to habitats and wildlife.