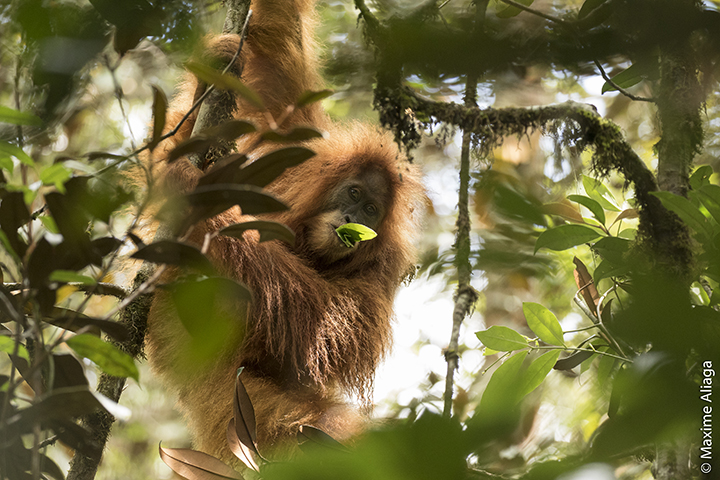 As one of the two most megadiverse countries in the world, Indonesia can today make another impressive claim—the country is home to a newly discovered orangutan species, the Tapanuli orangutan (Pongo tapanuliensis). This is the first new species of great ape described since the bonobo from the Democratic Republic of the Congo in 1929. With fewer than 800 left in the wild, the Tapanuli orangutan is now one of the world’s most endangered great ape species.

“Indonesia is a veritable treasure trove of biodiversity and this is another high-profile species, along with the Sumatran tiger, the Asian elephant and Sumatran rhino, for that country to take immense pride in,” said Russ Mittermeier, Global Wildlife Conservation’s incoming Chief Conservation Officer, Conservation International’s outgoing executive vice-chair, and chair of the International Union for Conservation of Nature Species Survival Commission’s (IUCN/SSC) Primate Specialist Group. “It is one of the two most important countries in the world for great ape conservation. The government of Indonesia is uniquely positioned to be the world’s leader in ensuring that the remarkable discovery of the Tapanuli orangutan leads to its ongoing survival.”

An international team of scientists described the species in a paper published today, November 2, in the scientific journal Current Biology. The researchers demonstrate that the Tapanuli orangutan is genetically and morphologically distinct from the Sumatran orangutan, and therefore a separate species. According to the paper, the Tapanuli orangutan is in fact more closely related to the Bornean orangutan than it is to the Sumatran orangutans that live to its north, north of Lake Toba. The three orangutans—Bornean, Sumatran and Tapanuli—evolved from a common ancestor about 3.4 million years ago.

“This discovery shows that despite almost 50 years of orangutan research on Sumatra there is still so much to learn about these apes and that maintaining them throughout their whole distribution is crucial to maintaining the diversity of orangutans across their range,” said Serge Wich, deputy vice-chair of the IUCN/SSC Section on Great Apes and co-author on the paper. GWC is the fiscal sponsor and an active supporter of the IUCN Species Survival Commission.

Tapanuli orangutans live in a few forest patches in the Central, North and South districts of Tapanuli in the province of North Sumatra, in an area called the Batang Toru Ecosystem, south of Lake Toba. Forest loss data indicates that key orangutan forest habitat in Sumatra was reduced by 60 percent between 1985 and 2007, which, in addition to illegal hunting, has led to a significant population reduction of both species in recent years. Today the severely diminished population of Tapanuli orangutans extends over only about 1,000 square kilometers. Logging, mining concessions, agricultural plantations and a proposed hydrodam all continue to threaten the orangutans’ habitat and survival. GWC is committed to exploring options to establish a project with local partners to help protect the species.

In light of this exciting new discovery, the IUCN/SSC Primate Specialist Group’s Section on Great Apes will use its extensive network of expertise and influence to come up with an action plan, in close collaboration with the Indonesian government, to further the conservation of the Tapanuli orangutan and other wildlife that shares its range. Specifically, this plan would include protecting the orangutan’s remaining habitat, reconnecting fragmented forest patches where the orangutans live so they can reach one another to breed, placing the Tapanuli orangutan on the Indonesian protected species list, and assisting the Indonesian government to find conservation-friendly alternatives for the region’s energy deficit, rather than a proposed hydrodam that would further imperil this critically endangered great ape species.

“The discovery of this species is a great opportunity for the government to celebrate Indonesia’s status as one of the most megadiverse countries in the world and to continue to be a leader in protecting the wildlife that makes our planet so unique,” Mittermeier said.