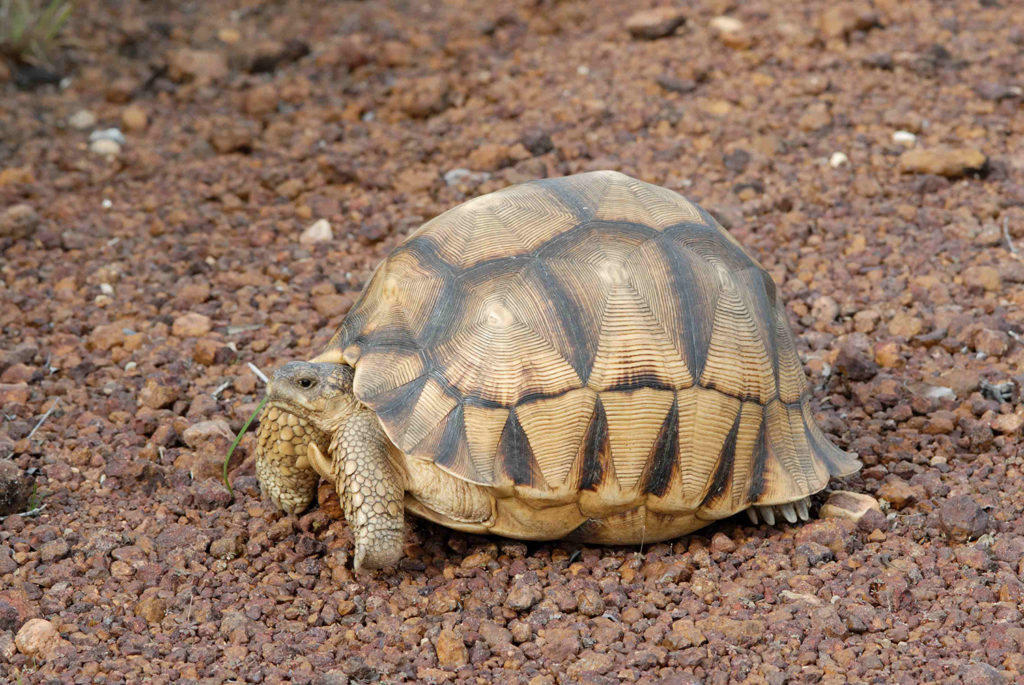 Unless the government of Madagascar takes swift action to enforce international anti-poaching and anti-trafficking laws, the country’s largest tortoise—the ploughshare tortoise (or angonoka tortoise)—will likely go extinct in the wild within the next two years. The dire warning comes from a coalition of international conservation organizations (Wildlife Conservation Society, Durrell Wildlife Conservation Trust, Turtle Survival Alliance, Turtle Conservancy and Global Wildlife Conservation) that issued a statement to governments attending the CITES meeting of the Conference of the Parties. CoP17 meets Sep. 24 – Oct. 5 in Johannesburg, South Africa.

“At this point the fate of the tortoise is up to the government of Madagascar,” said Peter Paul van Dijk, Turtle Conservancy’s field conservation programs director and an associate conservation scientist with GWC. “Conservationists can’t go in and be the police force or the customs official or the border inspections officer at the airport. If the responsible authorities don’t take urgent action to stop the poaching and trafficking, our world is going to feel a little emptier without these enchanting animals.”

Ploughshare tortoises live only in the Baly Bay National Park in northwestern Madagascar, a park that was established in 1997 specifically to protect the species in its natural habitat. Poachers target the animal to export to international collectors as a highly coveted pet with its striking gold and black shell. Over the last year, poaching of the species has reached its highest level, and conservationists estimate there may be less than 100 mature adults left in the reserve. The IUCN Red List of Threatened Species classifies the tortoise as critically endangered.

“CITES is the only locally and globally binding treaty for wildlife and the international trade in wildlife,” said Richard Lewis, director of Durrell Wildlife Conservation Trust’s Madagascar Programme. “As the global forum for addressing issues around international illegal wildlife trade, we have the world’s attention and we can hopefully help facilitate connections between the Malagasy government and countries that are receiving the smuggled tortoises. But at the end of the day, it is up to Madagascar to seize these opportunities and take control of this trade.”

In their joint statement to the CITES Conference, the coalition of conservation organizations together urged the member governments to prioritize working with the government of Madagascar to “develop effective and long-term solutions to the current crisis.” This includes encouraging the government to pursue all observed poaching or trafficking infractions; commit resources to the adequate enforcement of Baly Bay National Park; and to build institutional and technical capacity of customs at the country’s main airport.

“This is a wildlife emergency—the ploughshare tortoise is on the verge of extinction, driven by criminal networks and unscrupulous collectors who will pay top dollar the rarer a species is,” said Susan Lieberman, vice president for international conservation with WCS and head of the WCS delegation at the CITES meeting. “The CITES Parties must take urgent and immediate action at the upcoming meeting Johannesburg to prevent this amazing species and part of Madagascar’s unique natural heritage from disappearing forever.”

Since 1975, the ploughshare tortoise has been listed in CITES Appendix I, which includes the most threatened among the CITES-listed animals and plants. As the species is driven to extinction in the wild, conservationists are working to establish and protect a network of captive populations as a last resort to save the species.

Durrell Wildlife Conservation Trust is an international charity working to save species from extinction. Headquartered in Jersey in the Channel Islands, Durrell focuses on the most threatened species in the most threatened places. Established by author and conservationist, Gerald Durrell, in 1963, Durrell is unique among conservation organisations in integrating four core areas of operation: Field Programmes which undertake conservation action where it is needed most, the Academy which builds the capacity of conservation practitioners, the Wildlife Park in Jersey as a centre of excellence in animal husbandry, research, training and education and Conservation Science which underpins all activities.

Committed to zero turtle extinctions, the Turtle Survival Alliance transforms passion for turtles into effective conservation action through a global network of living collections and recovery programs. To achieve this mission, we restore populations in the wild and secure species in captivity through breeding programs and assurance colonies. Learn more at www.turtlesurvival.org