Bee-mimicking Clearwing Moth Buzzes Back to Life After 130 Years 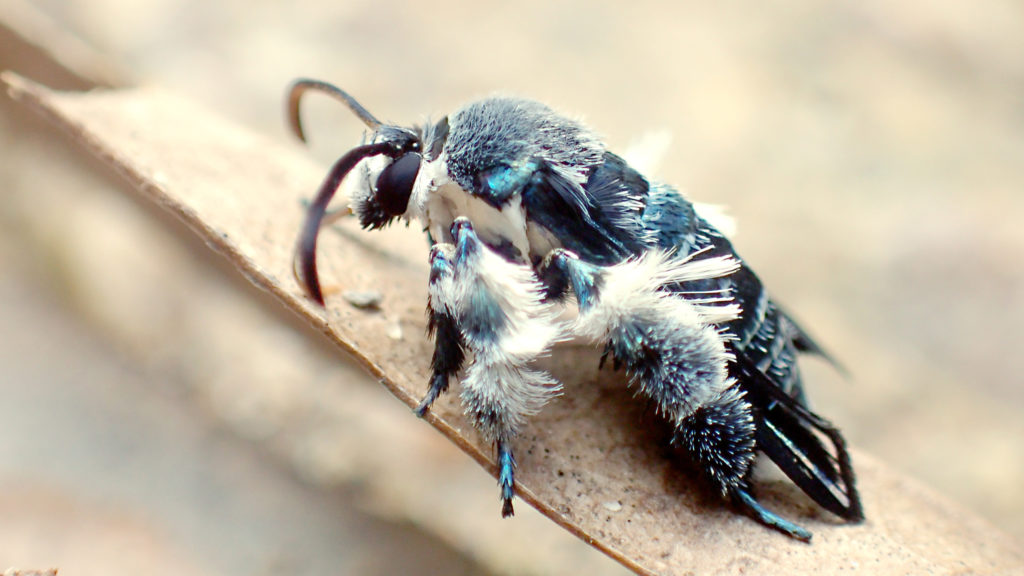 An entomologist from the University of Gdansk in Poland has rediscovered a striking blue-and-white species of clearwing moth known only from a single faded and damaged museum specimen collected in 1887. The Oriental blue clearwing (Heterosphecia tawonoides) looks more like a bee, behaves more like a bee, and may even buzz like a bee, according to a paper published recently about the species in the journal Tropical Conservation Science.

“You think about moths and you envision a grey, hairy insect that is attracted to light,” said Marta Skowron Volponi, a Ph.D. student at the University of Gdansk, co-founder of the ClearWing Foundation for Biodiversity and lead author of the paper. “But this species is dramatically different—it is beautiful, shiny blue in sunlight and it comes out during the day; and it is a master of disguise, mimicking bees on multiple levels and even hanging out with them. The Oriental blue clearwing is just two centimeters in size, but there are so many fascinating things about them and so much more we hope to learn.” [Read Skowron Volponi’s blog post about the rediscovery]

Although the museum specimen was collected in Indonesia, Skowron Volponi rediscovered the species in Taman Negara National Park in Malaysia. Her first encounter with the species was fleeting, only a few seconds, but Skowron Volponi says she knew immediately she had found a new species—or one that had not been seen in a very long time—because of the unique blue sheen of its wings and light-reflecting metallic blue scales. Since then, she and her paper co-author (and husband) Paolo Volponi have observed 12 individual Oriental blue clearwings.

The family of clearwing moths that this species belongs to is known for its bee-like appearance, including transparent and narrow wings. They also appear to have furry bodies and legs like bees, but the fur is actually scales that have elongated through evolution to resemble the fur of bees. These kinds of adaptations make a predator think twice about scooping the moth up for dinner for fear of being stung, Skowron Volponi said.

The paper provides the first insight into the behavior of this species, which flies among groups of bees and wasps from one rock to another, searching for water and sodium to lick up with its proboscis (a sucking mouthpart)—a behavior called “mud-puddling.” Only male clearwing moths mud-puddle, collecting sodium they can give as a “nuptial gift” to females while mating. Skowron Volponi also observed the Oriental blue clearwing flying in zigzags like bees, and even heard them buzzing like a bee—a finding that, once confirmed through additional research, would be a new discovery for clearwing moths.

“This is one of those rediscoveries that reminds us of how incredibly fascinating our wild world is and gives us the unique opportunity to learn about a species that would otherwise have been doomed to obscurity in the basement of a museum,” said Don Church, president of Global Wildlife Conservation and lead of GWC’s Search for Lost Species initiative, which was mentioned in the Tropical Conservation Science study. “Now we get the chance to unlock this species’ mysteries and help look at opportunities to protect it.”

The Oriental blue clearwing seems to be associated with a very specific habitat: banks of clean water flowing through Malaysia’s primary rainforests, which is also home to elephants, gibbons and sun bears, among other charismatic mammals. Malaysia has one of the most biodiverse communities of wildlife, but it also has the highest deforestation rates in the world. Although Skowron Volponi found the Oriental blue clearwing primarily on a riverbank in Taman Negara National Park, she also found the species outside of the protected area just across the river, where forests are being cleared away.

“When they chop down the trees and the first monsoon rains come, there are mudslides and everything is flooded into the river, which brings mud and pollution into the national park,” said Skowron Volponi, who in addition to rediscovering the Oriental blue clearwing, has discovered three new species of clearwing moths in recent years. “While people at first may not think that a sandy bank of a river is a diverse habitat, the reality is that this is precious real estate for clearwing moths, bees, and wonderful day-flying butterflies that are often endangered. Once those riverbanks vanish, so too will all of these species, including my favorites, the clearwing moths.”

Through the newly founded ClearWing Foundation for Biodiversity, Skowron Volponi and Volponi hope to raise awareness in local communities about the value of the rainforest and the animals living within. They also aim to highlight the conservation challenges to the Malaysian government with the hopes that the government will agree to put a buffer zone around the national park.

Photo: The rediscovered Oriental blue clearwing has been lost to science for 130 years. (Photo by Marta Skowron Volponi)

Inspired by butterflies with clear wings, aware of the environmental challenges of our times, ClearWing Foundation for Biodiversity supports rising talents, research projects and education campaigns aimed at increasing knowledge of the natural world and spreading awareness of the importance of its conservation through direct action on both a local and global scale. Learn more at http://www.clearwingfound.com/