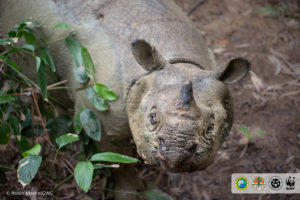 Caption: A Javan rhino (Rhinoceros sondaicus)—a species seen in the wild only a handful of times—wallows in mud in Indonesia’s Ujung Kulon National Park. A team from Global Wildlife Conservation and WWF-Indonesia, with permission from the national park, captured this rare photo, along with additional images and video, which are among the first to show the species wallowing. The Javan rhino is a critically endangered species with a population of just 68 individuals, all confined to the national park in West Java. Javan rhinos are solitary and rare animals that live in thick forests, making them much more difficult to find in the wild than their African counterparts, the white and black rhinos, which live in open grasslands and savannas. Javan rhinos once lived in parts of India, Bhutan, Bangladesh, Myanmar, Thailand, Laos, Cambodia, Vietnam, Indonesia and southern China. The last Vietnamese Javan rhino was found poached in 2010 during a joint WWF and National Park study, and is now recognized as extinct in Vietnam. Hunters have targeted the species across its range for centuries as its horn is prized in traditional medicine, and its lowland habitat has been cleared for rice fields across its distribution. (Photo by Robin Moore/Global Wildlife Conservation, Video by WWF-Indonesia/David Hermanjaya)

WWF-Indonesia is a non-profit organization founded on 1961. WWF is working on 31 regional offices in 17 provinces throughout Indonesia, collaborating and partnering with society, NGO, media, business, banking, universities, as well as central and local governments. WWF mission is to conserve, restore and managing ecosystem and biodiversity in Indonesia in fair and sustainable. One of the activities is through advocacy and influencing policy, law and relevant institutions to support better environment governance. For more information, visit our website www.wwf.or.id