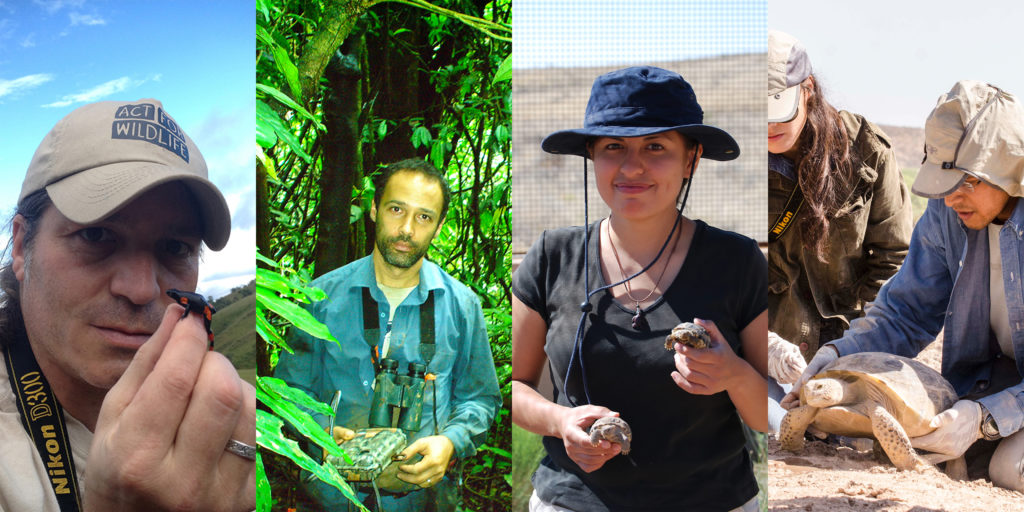 “Conservation of endangered species depends upon people with the passion and dedication to protect them,” said Don Church, Global Wildlife Conservation’s president and director of conservation. “The Sabin Conservation Prizes are an opportunity to recognize these guardians of our wildlife and wildlands on a global stage. Gerardo, Rosalinda, Gamaliel and Andrés embody the spirit of why these awards were created.”

Gerardo Garcia started his career at the Barcelona Zoo, where he was a key player in the early years of the recovery program for the Mallorcan midwife toad – a program now considered something of a model species-conservation success story. Garcia has brought together ex situ and in situ conservation with research and training to build capacity for species conservation in multiple countries, from Montserrat and Madagascar to Bermuda and Bolivia. He is curator of lower vertebrates and invertebrates at the Chester Zoo.

Rosalinda Palomo Ramos and Gamaliel Castañeda Gaytán are spearheading the study and conservation of some of northern Mexico’s most emblematic turtles. Palomo Ramos has spent years deciphering the decline of the Bolsón tortoises, and in understanding their relationship with ranchers in the Mapimi Biosphere Reserve. She is completing her doctoral thesis on the conservation biology of the Bolson Tortoise, and is committed to the long-term survival of this imperiled species. Castañeda Gaytán has studied the Coahuila Box Turtle and other reptiles of the Chihuahuan Desert biome, including the Bolson Tortoise. In his position as a lecturer of herpetology at the University of Durango at Gómez Palacio, he has amplified the importance and significance of reptile biodiversity conservation, cultivating the next conservation leaders in the field.

Andrés Link has spent close to two decades studying the social relations of wild spider monkeys in Colombia and Ecuador, with a focus on how they compete and cooperate. His research has increased our understanding of the effects of habitat degradation and fragmentation on the ecology and population dynamics of Neotropical primates. Link goes beyond research to train the next generation of field biologists. He also works with local communities to improve livelihoods while preserving the tropical forests and ecosystems upon which the communities and their primate neighbors depend.

The 2018 Sabin Conservation Prizes and the awards ceremony are made possible thanks to the Andrew Sabin Family Foundation. Sabin has donated more than $20 million to wildlife conservation efforts over the past 40 years, supporting high-impact conservation through targeted projects around the world. He has participated in conservation projects preserving more than 250,000 acres of critical habitat and protecting more than 80 species.

“These annual awards are an opportunity to shine the spotlight on conservation champions around the world,” said businessman and environmentalist Andy Sabin. “Many are working on species that receive very little attention in the mainstream media. By recognizing these champions, we hope to elevate the importance of their work and how we all benefit from their tireless efforts to preserve the fabric of life on our planet.”

After surviving more than 200 million years and outliving the dinosaurs, turtles are now among the most endangered creatures on Earth. The Turtle Conservancy is dedicated to protecting threatened turtles and tortoises and their natural habitats worldwide. In doing so we also protect all the other biodiversity in these areas. We envision a world where all species ultimately thrive in the wild.

The IUCN Species Survival Commission’s mission is to conserve biological diversity by developing and executing programs to save, restore and wisely manage species and their habitats. Survival of the world’s living primate species and subspecies is the principal mission of the IUCN/SSC Primate Specialist Group and its more than 600 volunteer professionals who represent the front line in international primate conservation.