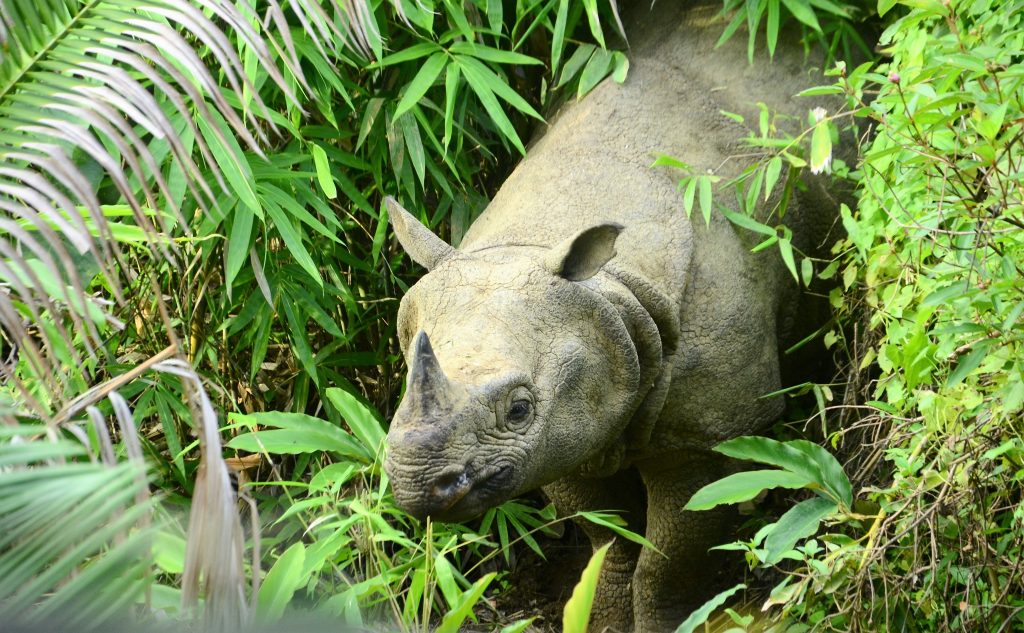 The world’s only population of Javan rhinoceros, already under severe threat from poaching, could go extinct as the result of natural disasters, including volcanic eruptions and tsunamis, according to a new study published this week in Conservation Letters. The few remaining Javan rhinos live in Ujung Kulon National Park, which is within sight of volcanic Mount Krakatoa and close to the Indonesian Sunda Arc, an area of converging tectonic plates that commonly cause earthquakes, triggering tsunamis.

In the study, researchers obtained 1,660 images of rhinos from 178 camera trap locations in 2013 to determine a population estimate of 62 individuals. A tsunami as high as 10 meters, or about 33 feet, which is projected to occur within the next 10 years, could threaten 80 percent of the area in the national park with the highest density of rhinos. As a result, the authors urge the establishment of additional rhino populations away from the reach of natural disasters.

“Rhinos face a suite of threats, many of which are caused by humans, but in the case of the Javan rhino a single natural disaster could be the end of the species,” said Barney Long, Global Wildlife Conservation director of species conservation and co-author on the paper. “Swift action is needed to ensure Javan rhinos are present and breeding in multiple locations to remove this single threat. As Ujung Kulon can’t hold many more rhinos, establishing a second population will actually also enable us to increase the number of Javan rhinos also, so translocation has multiple benefits.”

The study, “Preventing Global Extinction of the Javan Rhino: Tsunami Risk and Future Conservation Direction,” was published May 8 by conservationists from Indonesia and around the world, including authors from Ujung Kulon National Park Authority, WWF, Indonesian Rhino Foundation, Global Wildlife Conservation and Colorado State University.

Translocating animals will require identifying and securing new sites, securing the agreement of many stakeholders, including local authorities and the public, and intensive monitoring in Ujung Kulon National Park to determine which individual Javan rhinos may be suitable for translocation.

“The Javan rhino is the most endangered land mammal in the world,” said Brian Gerber, a postdoctoral fellow at Colorado State University and co-author on the paper. “Now we need the social and political will to move things forward and establish additional rhino populations.”

The study’s authors also emphasize the importance of taking conservation actions that can help increase the Ujung Kulon National Park small rhino population numbers, increasing survival odds for at least part of the population in the case of a natural disaster. This includes maintaining strict protection of the remaining rhinos, maintaining the rhino monitoring work, and scaling up ongoing habitat management including controlling Arenga palm, which shades out the forest floor and inhibits the growth of plants that rhinos consume.

“What we found in this study provides good momentum for our efforts to save the Javan rhino, considering that we are racing against time,” said Arnold Sitompul, conservation director of WWF-Indonesia. “The results of this study are well timed to be used to revise the Conservation Strategy and Action Plan (SRAK) of Javan rhino, which will expire in 2017.”

The IUCN Red List of Threatened Species classifies the Javan rhinoceros as critically endangered. The species was extirpated from most of its historical range beginning in the middle of the 19th century, which spread from Java to northeast India, primarily as the result of demand for rhino horn and other products.

WWF-Indonesia is an  Independent  national  conservation  organization  and  is  a  part  of  WWF global network, WWF work in Indonesia began in 1962 with research on  Javan Rhino in Ujung Kulon  and  currently  WWF-Indonesia  is  actively  working  in  30  field  areas  spreading  across  17 provinces from Aceh to Papua. WWF-Indonesia is supported by 500 staffs and collaborates with government, local communities, private sector, NGOs, civil society and public in general. From 2006 to 2013, WWF-Indonesia is accountable to its 64.000 Supporters who provide their support through various fundraising program initiated by WWF in Indonesia.

Founded in 1870 as the Colorado Agricultural College, CSU is now among the nation’s leading research universities. Located in Fort Collins, CSU currently enrolls more than 33,000 students, and has more than 1,800 faculty members working in eight colleges. CSU is recognized as a premier research institution and routinely ranks as one of the top American universities without a medical school in research expenditures. In Fiscal Year 2016, CSU research expenditures totaled $332 million; this was the ninth consecutive year research expenditures at the university have topped $300 million. More information is available at www.colostate.edu.