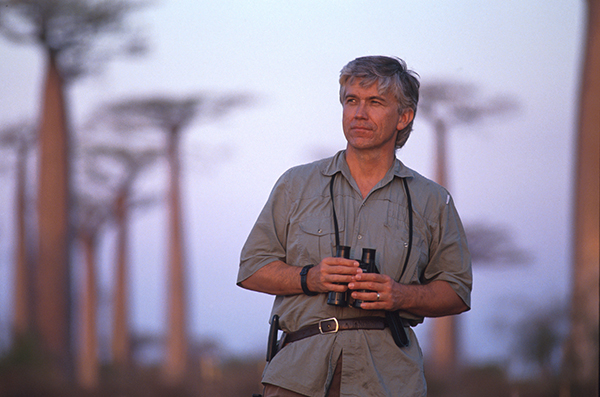 World-renowned wildlife champion Russ Mittermeier is joining Global Wildlife Conservation as Chief Conservation Officer, a leadership role that will help position GWC as an even more powerful force for the protection of endangered wildlife and wildlands worldwide. With more than 45 years of experience in conservation, Mittermeier has described 18 species new to science, has eight species named in his honor, has authored 37 books and more than 700 scientific and popular articles, and has contributed to the conservation of some of Earth’s most critically threatened places.

“Russ Mittermeier is a legend in the field of species conservation, and it is a true privilege to bring him together with our team and GWC to amplify our impact,” said Brian Sheth, chairman of GWC. “When we decided to establish the role of Chief Conservation Officer, Russ jumped to the top of our list immediately. His passion, his effectiveness, and his prolific advocacy put him in an elite group among conservationists, and we are thrilled and honored to work with him.”

Mittermeier joins GWC from Conservation International, where he served as president from 1989 until 2014. The two organizations will now partner to identify key areas in which to join efforts, including in the protection of wildlands in Amazonia; conservation of wildlife in Madagascar, Indonesia and the Tropical Andes; and research through Rapid Assessment Programs.

Trained as a primatologist and herpetologist, Mittermeier has traveled widely in 169 countries and seven continents, and has conducted fieldwork in more than 30. He has seen more primate species in the wild (more than 350) and has been in more tropical forest ecosystems than anyone. In particular, he has played a key role in conservation in the Atlantic Forest region of Brazil, in Madagascar and in South America’s Guiana Shield region, home to the most pristine rainforests left on Earth.

“Russ and I have worked together for decades on causes related to species conservation, and over that time I have admired his dedication to preserving our planet’s biodiversity and the habitats that enable it to thrive,” said Jane Goodall, the acclaimed primatologist and conservationist. “I know that Russ will do extraordinary work with GWC in saving our rainforests from destruction and assuring the survival of rare tropical species.”

In this new role with GWC, Mittermeier will have an opportunity to leverage his extensive network and experience for maximum species conservation impact. Since 1977, Mittermeier has served as chair of the International Union for the Conservation of Nature Species Survival Commission (IUCN SSC) Primate Specialist Group. In addition, Mittermeier, who TIME Magazine named a “Hero for the Planet” in 1999, is an adjunct professor at the State University of New York, a research associate at Harvard’s Museum of Comparative Zoology, and the president of the Margot Marsh Biodiversity Foundation.

Mittermeier will lead GWC’s efforts to protect tropical forests—enormous reservoirs of biodiversity and a key component in preventing runaway climate change—in hotspots and critical wilderness. As a global leader in primate conservation, he will scale up his work at GWC to protect humans’ closest relatives. For example, Mittermeier will play a vital role in GWC’s work to protect the lemurs of Madagascar, the monkeys of Amazonia and the Atlantic Forest of Brazil, and the imperiled red colobus monkeys of Africa.

“Given my life-long commitment to species and my strong belief in the fundamental importance of species conservation, I am delighted to be joining GWC—their strong focus on conserving species and wildlands is a perfect fit for me for the remainder of my career,” Mittermeier said. “GWC is also becoming a global leader in the conservation of tropical forests, which is especially important for me as a primatologist because 90 percent of all primate species are found in tropical forests. Tropical forests are also important for biodiversity in general, and they provide a wide range of ecosystem services, include some of the last homes for indigenous people, and hold the key to combating climate change in the most cost-effective way.”