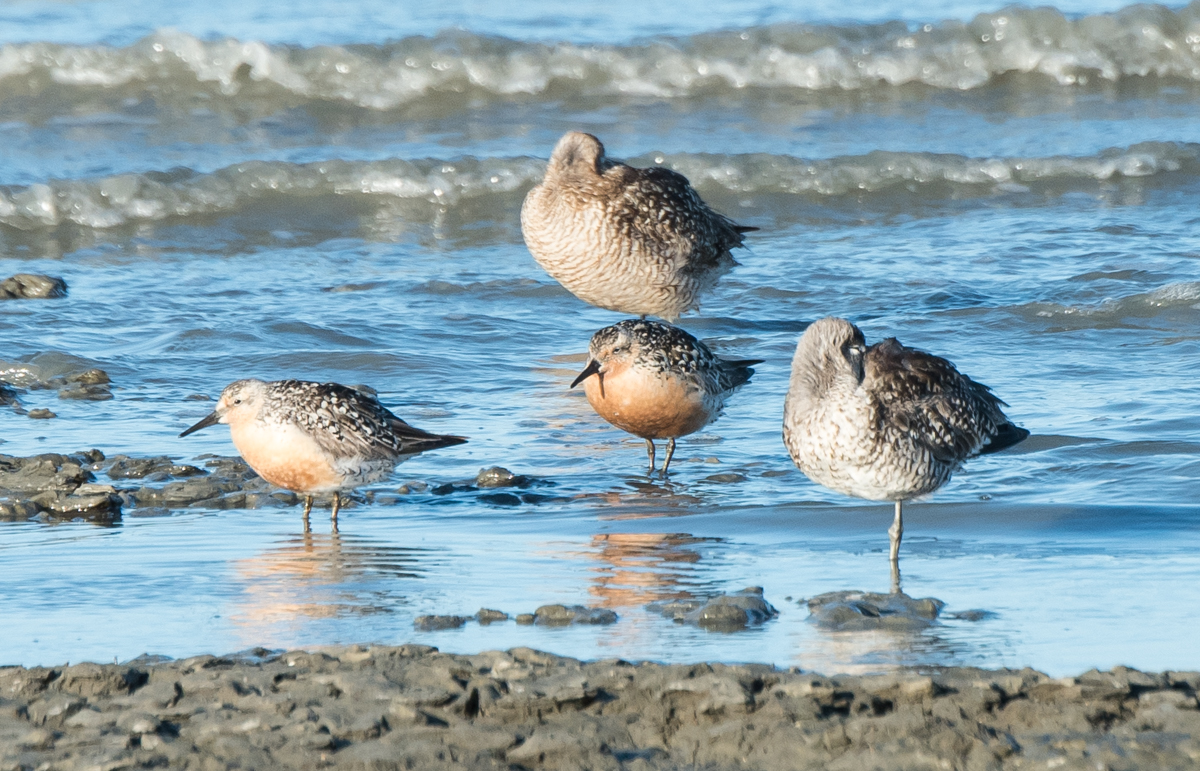 The red knot in California is one of the species that over the weekend helped put John Weigel above the 2013 record of 749 bird species found in a Big Year. (Photo by John Weigel, Devil Ark)

At 753 bird species, Devil Ark founder and all-star birder John Weigel broke the record over the weekend for most birds found in North America in a single year. His Big Year has taken him across North America, from the remote Attu Island in Alaska to the southern tip of Florida. Along the way he is raising awareness and funds for Global Wildlife Conservation partner Devil Ark, the largest, most successful breeding program for the endangered Tasmanian devil.

“This is a sweet moment, and follows a very long and arduous process of tracking down so many birds in so many places,” Weigel said. “Since it’s so early in the year still, I feel there’s plenty of scope to set the bar considerably higher before midnight on New Year’s eve, requiring the next Big Year lunatic to stretch even further.”

Over the weekend Weigel added five more species to his list, putting him over Neil Hayward’s 2013 record of 749 birds: the black swift and the Vaux’s swift in Idaho, the gray partridge in Washington, and the Buller’s shearwater and red knot in California. Weigel’s record-breaking total includes 89 rare species, two of which may not have been seen before in North America—the Cuban vireo in Florida and the pine flycatcher in Arizona. Weigel broke the Big Year record for Australia in 2012.

“John’s energy and commitment are an inspiration to those of us working to save endangered wildlife species against the odds,” said GWC President and Director of Conservation Don Church. “This is a great example of how a passion for birding can be transformed into real conservation action. GWC is proud to support John, Devil Ark and the successful efforts to safeguard Tasmanian devils and Australia’s other unique and, in many cases, endangered wildlife.”

Weigel’s adventures have so far taken him to 23 states and two Canadian provinces. He has found the most bird species in Texas (174), Arizona (131) and Florida (93), with the most rare species in Alaska (19). He attributes his success to the El Niño conditions that have resulted in an influx of rare birds. Though Weigel has beaten the record, now he aims to end the year as the recordholder, as he races a small group of other dedicated Big Year birders. GWC tracks Weigel’s progress in an interview as he shares his stories in the field.

“It continues to be my intention to run a tenacious, if not smarter, Big Year strategy, right through to the final hours of 2016,” Weigel said. “It is my hope that the supporters of Global Wildlife Conservation’s fundraising campaign for Devil Ark will tap into my enthusiasm for converting what may well prove to be a very long-lasting American birding record into an expansion of the Devil Ark facility.”

Once widespread in Australia, Tasmanian devils have been nearly wiped out by one of the only cancers known to spread as a contagious disease, called Devil Facial Tumor Disease. The devils are now extinct on mainland Australia. In Tasmania, their numbers in the wild have plummeted to less than 10 percent of historic population size—just 25,000 devils persist today. Devil Ark, based in the Barrington Tops hills of southeastern Australia, is building an insurance population of Tasmanian devils to release back into the wild.

Today Devil Ark is home to 150 Tasmanian devils and aims to expand to 360 to ensure a viable population. Individuals interested in supporting Birding for Devils and these efforts to save the species can make a donation here.

Photo: The red knot in California is one of the species that over the weekend helped put John Weigel above the 2013 record of 749 bird species found in a Big Year. (Photo by John Weigel, Devil Ark)

Devil Ark is a not for profit organisation and registered charity. Dedicated in ensuring the survival of the endangered Tasmanian devil at risk of extinction due to Devil Facial Tumour Disease (DFTD). Devil Ark plays a critical role in managing an insurance population of the Tasmanian devil. Devil Ark’s facility was built in 2010 with only 44 founder devils. Over the past six years, we have grown to 150 adult devils and produced more than 200 joeys/babies, a number of which were returned to the wild in 2015. We are committed to increasing the population to 360 devils by 2020. Extinction is NOT an option. Learn more at http://www.devilark.org.au/