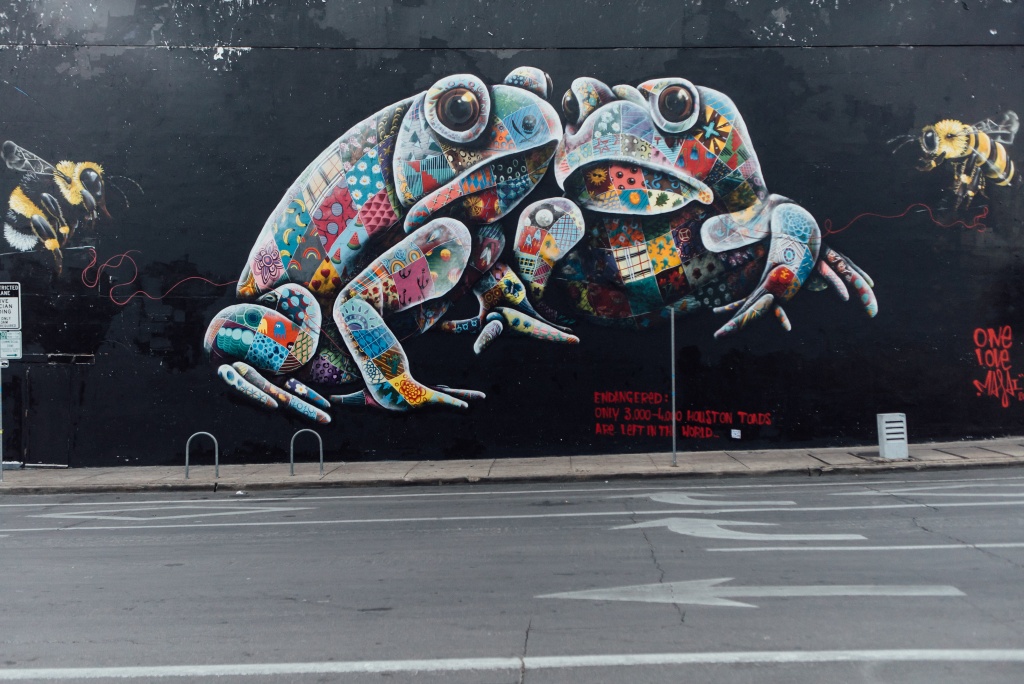 Emil Walker, The Art of Beeing

In an effort to tackle species extinction through art, British artist Louis Masai has transformed the side of a building in downtown Austin into a colorful mural of two endangered Houston toads. Austin is one of 12 U.S. cities Masai is visiting to paint murals of wildlife as part of The Art of Beeing tour. Masai created his Austin mural over the course of six days, from Nov. 12 – Nov. 17, in partnership with Austin-based Global Wildlife Conservation and World Class Capital Group.

“Art is such a powerful way to capture the beauty of the animals we share this planet with,” said Robin Moore, GWC communications director. “Austin residents, in particular, appreciate artwork, and Louis’s mural is a wonderful gift to a community that values conservation. We hope when people see the colorful toad, they’ll walk away feeling inspired to help us celebrate and protect endangered species.”

Austin residents and visitors can see Masai’s Houston toad mural on the northwest corner of 6th Street and San Jacinto Blvd. (222 E. 6th Street), on a wall of a building owned by World Class Capital Group. World Class Capital Group is a leading national real estate investment firm headquartered in Austin with a strong commitment to its local community and communities in the 16 states across the country where it owns assets.

“We are delighted to donate this wall as the canvas for this effort to raise awareness of the plight of endangered species and to bring art, beauty and conservation to the heart of Austin’s famed Sixth Street entertainment district,” said Nate Paul, CEO of World Class Capital Group.

The Art of Beeing tour kicked off Oct. 6 and is one of the most ambitious mural projects of its kind to date, reflecting the fast-escalating extinction crisis. The Art of Beeing highlights local species at risk and the urgent need to act on climate change and environmental degradation. It calls for individuals to come together, much like bees, to put nature first. Follow tour progress at http://www.artofbeeing.org.

“Within the USA’s ecosystems are some of the world’s most endangered species,” Masai said. “I’m painting these animals as patchwork toy murals because, unless we act now, they will become relegated to items on a toy store shelf. Just as patchwork has a history of sharing memories and being passed down the family line, these species could become mere memories for future generations. For me, the bees represent the stitching holding our ecosystems together.”

According to the IUCN Red List of Threatened Species, the Houston toad was the first amphibian granted protection under the U.S. Endangered Species Act. Historically the species ranged across the central coastal region of Texas, but started to disappear following an extended drought in the 1960s and the rapid urban development of the city of Houston. The largest remaining population, about 2,000 adults, is in Bastrop County.

In addition to GWC and World Class Capital Group, Defenders of Wildlife, Ecoalf (the recycling fashion brand) and Synchronicity Earth are among the organizations supporting The Art of Beeing, produced by Louis Masai and Human Nature.