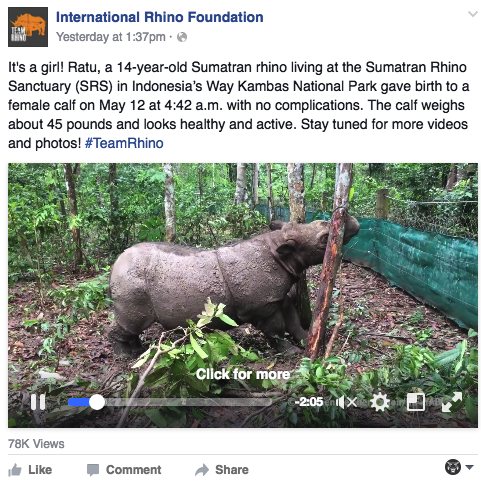 Hope arrived in Indonesia in the form of a Sumatran Rhino calf, thanks to the hard work of our partners at the International Rhino Foundation (IRF) and Yayasan Badak Indonesia (YABI), who announced May 12 the second birth of a calf at the Sumatran Rhino Sanctuary (SRS). The first calf, born in 2012, was the first born in captivity in Indonesia in 124 years. SRS is home to the only breeding population of captive rhinos.

“With around 100 Sumatran Rhinos left in the wild, the birth of every healthy rhino calf gives us hope for this species,” said Barney Long, GWC’s director of species conservation. “The survival of the species relies on a simple ratio: more calves born than rhino deaths. Today’s news helps confirm that a captive population can play a major role in the recovery of this majestic species and should precipitate more active management of the meta-population and an expansion of these captive breeding efforts.”

Over the past few decades, Sumatran Rhinos have disappeared from much of their range as the result of poaching. Today, the biggest threat to this species is the small population—because there are so few left, they cannot find one another for breeding and individuals within small, fragmented populations are likely closely related to each other. Saving the species will require further captive breeding, including bringing isolated animals into captivity; consolidating small, isolated populations; and the development of advanced artificial reproductive technologies. Global Wildlife Conservation is working to protect and recover the Sumatran Rhino with our partners.

Congratulations to IRF and YABI!