The Sierra Nevada de Santa Marta is the world’s highest coastal mountain range, located 42 kilometers from Colombia’s Caribbean Coast and rising over 5,500 meters above sea level. This makes it an area of contrasts, with surrounding terrain ranging from tropical forests to snowy peaks. It is home to one of the world’s largest concentrations of endemic species as well as more than 100,000 people from four Indigenous communities: the Arhuaco, Kogui, Kankuamo  and Wiwa.

In response to the COVID-19 pandemic, the communities of the Sierra Nevada de Santa Marta have closed off the area to outsiders to lower the risk of infection. These isolation measures have taken a significant toll on Indigenous peoples’ traditional agricultural practices and livelihoods, their autonomy and protection of their territories, and their relationship with nature and the outside world.

People living in the highlands and lowlands of the Sierra Nevada de Santa Marta have long traded with each other to meet their needs. Indigenous communities from the highlands usually go to the main cities to get medicine and food to complement their diets, and in some cases to sell handicrafts and other goods. For example, some indigenous communities have specialized in cultivating organic coffee that they sell to international markets in the lowlands. When trade routes closed due to the pandemic, it significantly strained communities’ abilities to thrive. As we have seen in every corner of the planet, COVID quarantines have highlighted critical connections that we don’t always think about, including the interdependence of rural and urban economies and the need for a healthy equilibrium. 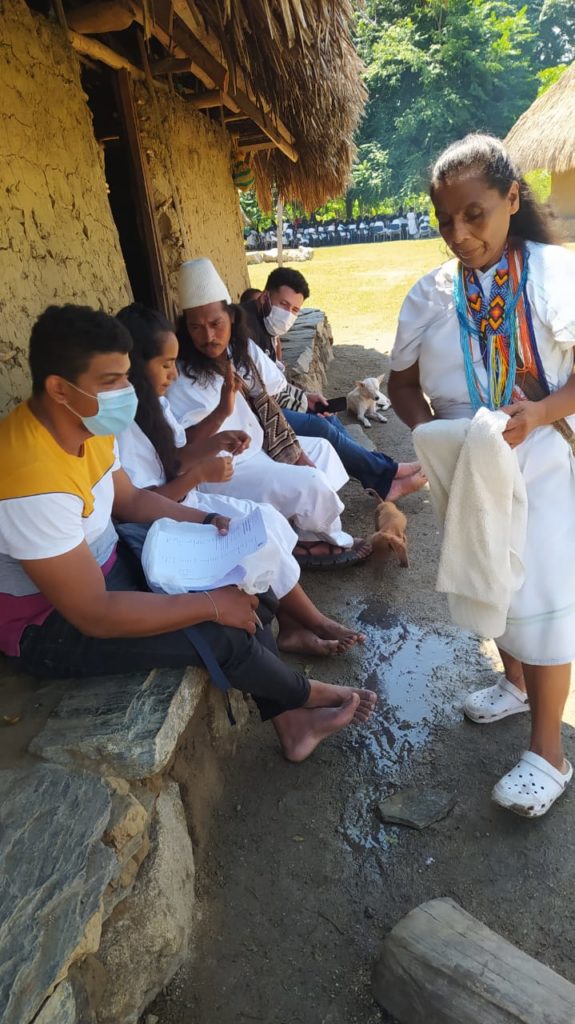 “Locking ourselves up, closing the borders and restricting physical mobility works for some time. But this measure has serious implications in the mid- to long-term,” says Ruperto Chaparro, a member of the Arhuaco community and the organization Amas la Sierra an indigenous-based coffee farming project. “Shortages and starvation don’t only affect Indigenous communities. They also happen in the big cities where companies are closing their doors and laying their workers off.”

This has exacerbated an ongoing threat to Indigenous communities: illegal invasions. On August 19, 2020, several hundred non-Indigenous people invaded Arhuaco communities located in Don Diego river basin. Taking advantage of government absence and inaction, they illegally invaded the Arhuaco territory to satisfy their economic needs. In addition to larger, headline-grabbing seizures like these, a steady stream of smaller invasions has also threatened Indigenous peoples’ food security, which had already weakened in some places due to droughts. These add to the invasion threats communities already face from agro-industrial expansion, mining, tourism and armed groups.

Invasions of all types put Indigenous peoples at greater risk for contracting COVID-19. Cases started rising, and in early August the governor of the Kogui people, José de los Santos Sauna, passed away from COVID-19.

Lockdown measures have also made it more difficult for communities to report these threats and to protect their land rights and autonomy.

“Communication is one of our greatest challenges. It has been difficult to access technology, from telephone reception to the Internet, from the remote mountains and we avoid going down to the city,” said Lucelly Chaparro, a member of the Arhuaco community. “That makes it difficult to defend our rights because we can’t reach the government in a timely manner.” 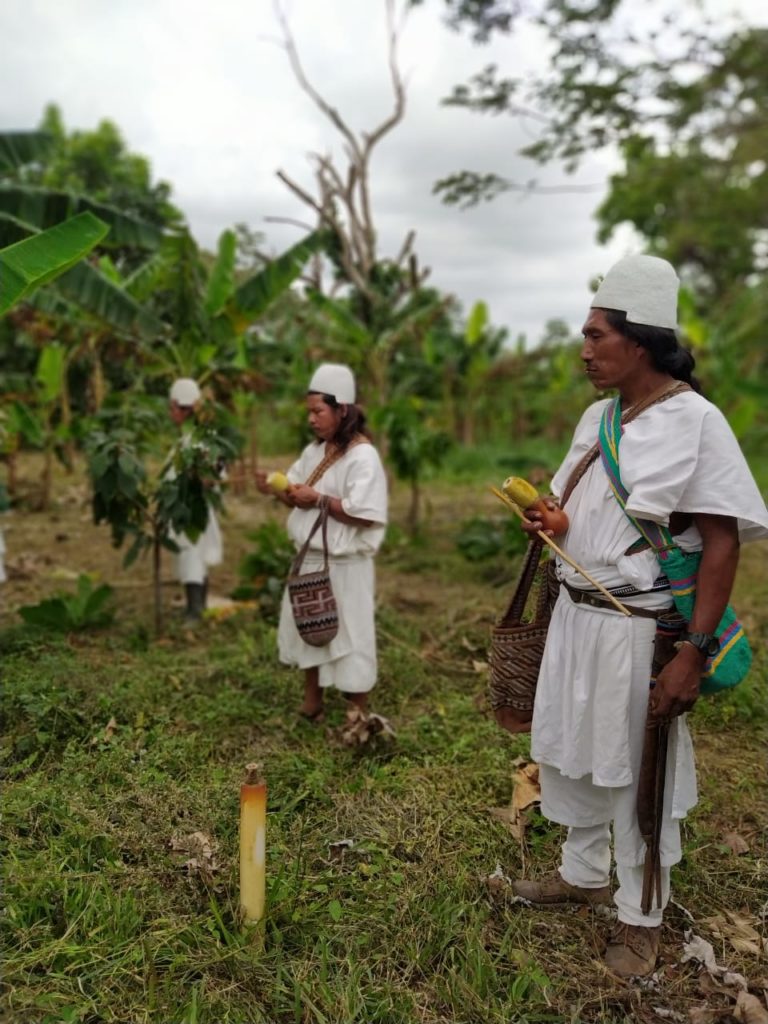 Additionally, COVID-19 lockdowns have disrupted the equilibrium between humans and nature. The Indigenous peoples of the Sierra Nevada de Santa Marta view the mountain as the heart of the Earth, and themselves as the “big brothers” who protect it. Route closures have affected their ability to observe spiritual practices—such as traveling to the highlands to make payments to nature—that maintain the balance between people and the natural world.

Fundación Atelopus, a GWC partner, has been working alongside the Arhuaco community of Kutunzama’s spiritual and political leaders to address long-term threats to the community’s culture and the region’s biodiversity. They are also helping mitigate COVID-19 through the distribution of personal protective equipment. The pandemic has prevented the organization from meeting frequently with community members, so they have used digital tools such as WhatsApp to conduct trainings and co-develop territorial management strategies. 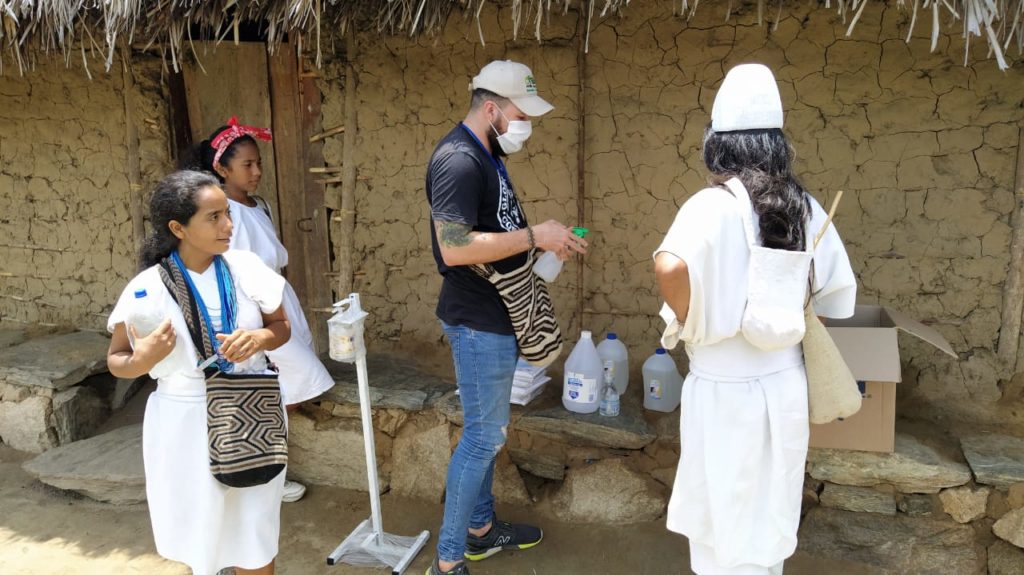 “The isolation measures that have been implemented as a result of the pandemic have largely revealed the shortcomings that exist for the protection of Indigenous communities and their territories in the Sierra Nevada de Santa Marta, mainly due to the little attention paid to them by government agencies,” said Jose Luis Perez, vice president of GWC partner Fundación Atelopus.

As in many countries, many people talk of wanting life to “normalize” as soon as possible.

“We, the Arhuaco people, aren’t friends with ‘normalization.’ Although the pandemic has made people reconsider their relationship with nature, when things ‘go back to normal’ there are going to be a lot of projects and more people coming to the region, which is going to exert more pressure on the land,” says Ruperto. “We have to create a new social contract and a new environmental contract.”