From The Field: Hurricane Otto Tears Through Indio Maíz

I have spent the last few years helping protect Nicaragua’s Indio Maíz Biological Reserve in collaboration with the indigenous Rama and afro-descendant Kriol communities who call it home. I have spent many months in Indio Maíz researching its flora and fauna, countless hours in meetings and negotiations with authorities to change their meager commitment to conserving the Caribbean Coast’s protected areas, and frequent late nights working to develop new strategies to keep the reserve and the indigenous territory within from disappearing off the map. The reserve’s primary forests and incredible biodiversity have inspired me; Indio Maíz embodies the greater good that we as conservationists dedicate ourselves to protect.

It was thus disconcerting to see Indio Maíz dismantled before my eyes. 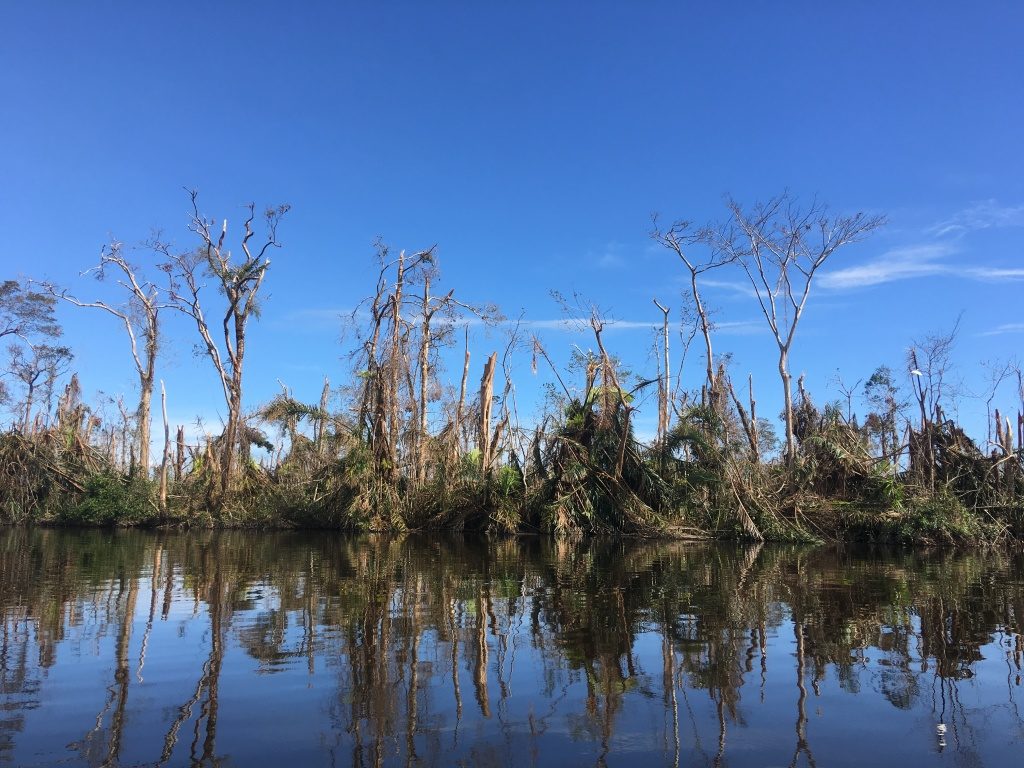 The Raphia palm swamps were hit hard by Hurricane Otto. The majority of the palm leaves blew over or broke off, exposing the trees sprinkled between the palms to the storm’s winds. (Photo by Camilo de Castro Belli)

On November 24, 2016 I woke up in a hammock in the heart of Indio Maíz. I was with a group of 16 people, including 11 indigenous Rama men from the community of Indian River. We had left from Greytown on Sunday the 20th on an expedition to cite illegal colonists in the remotest regions of the reserve and mandate that they travel to Greytown for a meeting with communal authorities.  We had made significant progress by Wednesday afternoon and set up our camp alongside the Pimienta River.  After my hammock was tied, I switched on our satellite communication device to let the world know that we were OK.  Minutes later a series of messages flooded our Delorme Inreach, all with the same message: “All of you need to get out! A hurricane is coming toward you!” But by then it was too late.  We were at least 15 hours from the nearest community; if we tried to walk out, the storm would catch us halfway.

The following morning we broke down our camp early and retraced our steps to a clearing made by colonists that we had found the day before. Here we would pass the storm wrapped in plastic tarps and pressed against fallen trees on the southern slope of a small hill in the middle of the clearing. As the outer bands of the storm began to circle in from the north just before noon, none of us were fearful for our lives. We were in a relatively safe location with few standing trees, multiple slopes available to us, and fallen Dipteryx panemensis trees, one of the densest woods of the jungle, to hide behind. With us were at least two men who had spent 1988’s Hurricane Joan in the forest north of Bluefields, and we were with a team that could survive for weeks—if not months—in the forest without additional supplies.  Rather than fear, a sense of sadness hung in the air as we watched each pass of the hurricane blow down more and more of the forest. By the time the golden light of Hurricane Otto’s eye reached us a few hours later, 65-70 percent of the hundreds of trees surrounding us were on the forest floor. I felt helpless and drained of hope: the reserve that we had all been working so hard to protect, the forest that is so closely tied to the identity and culture of the Rama Indian community, was torn apart over the course of 3-4 hours. 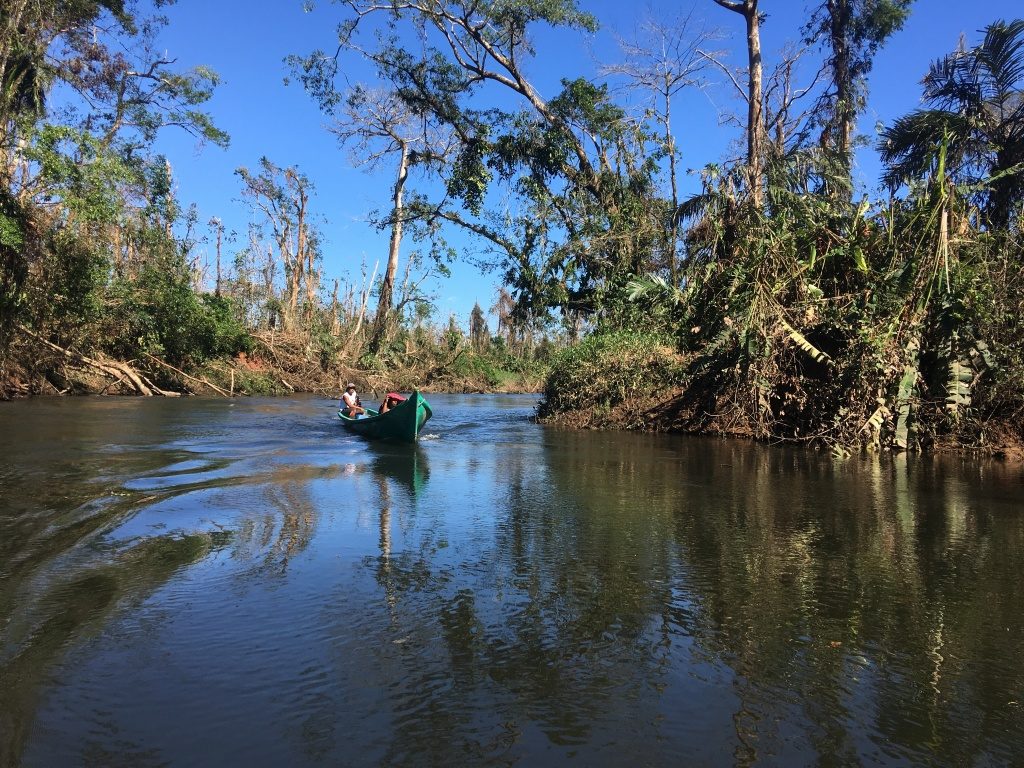 Once we established communication with everyone’s families to confirm that they were safe, we began what I anticipated would be a somber walk toward the nearest location with public transportation. As we climbed out of the wreckage for two and a half days, there were moments of sadness, and despairing rhetorical questions about the capacity of Indio Maíz and the Rama community of Indian River to recover. On more than one occasion, I heard someone say: “Everything is gone.” Yet before we could get swept into the tide of hopelessness, a group of Rama forest rangers began strategizing for their December mission, talking about new tactics and actions they will need to implement post-hurricane, and reminiscing about how the forest grew back after Hurricane Joan. Before long, the rest of the group followed suit.

Overcoming the seemingly insurmountable is not new to us: Many indigenous groups and conservationists constantly face massive threats to the ecosystems we live to protect; threats with drivers that operate on unfathomable scales. Although we must and do celebrate our conservation wins, we are also used to being disappointed, coping with the loss of species, the loss of protected areas, and changes in government that undo years of hard work. Yet our identities depend on wild places, timeless forests, and the planet’s incredible biodiversity. To capitulate when faced with despair would be to give up on ourselves. Thus, in the face of disappointment and immense challenges, we do what we do best: fight with more resolve and face the world with more resilience than ever before. 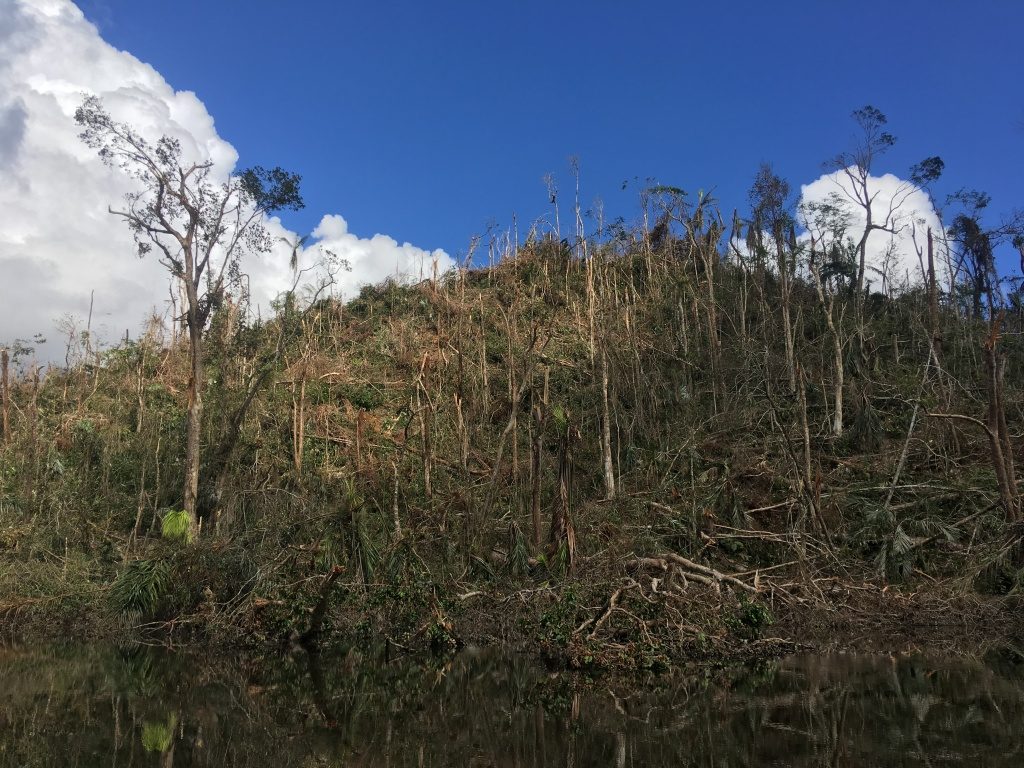 Cucaracha Hill in Indio Maíz is one of the most significantly damaged locations. Very few trees were left unscathed by Hurricane Otto. (Photo by Camilo de Castro Belli)

As a result of Hurricane Otto, Indio Maíz is more vulnerable to land traffickers, illegal colonists, and timber companies than ever before. Yet all of the lessons from the past tell us that it will grow back quickly if given the chance. Within five years it will once again be a closed canopy forest. I am optimistic that it will never cease to be one of the largest expanses of continuous natural habitat in Central America and a critical core area for many endangered and emblematic species, such as Baird’s Tapirs, Jaguars, and White-lipped Peccaries. The Rama and Kriol people who call Indio Maíz home won’t give up their reserve without a fight. We owe it to them to redouble our efforts and to help them maintain the optimism, resilience, and dedication that makes them ideal conservation partners, and that has inspired us for years to work tirelessly alongside them.