By Global Wildlife Conservation on November 03, 2018

Anya Ratnayaka was a young wildlife conservationist living in Colombo in her native Sri Lanka when a rogue Fishing Cat changed her life. Like many young conservationists, she wanted to study and protect the famous Leopard. But a chance meeting with a Fishing Cat spurred Ratnayaka to become a powerful champion instead of this lesser-known, equally charismatic feline.

“When I walked into the room, this pair of glowing eyes looked out from under the bed at me,” Ratnayaka says of meeting the Fishing Cat at the home of a local vet who was rehabilitating the animal. “This thing came out with a purple sock hanging from its mouth, and it was a creature I’d never seen before. I had never heard of them; I had no idea we had them in this country.” 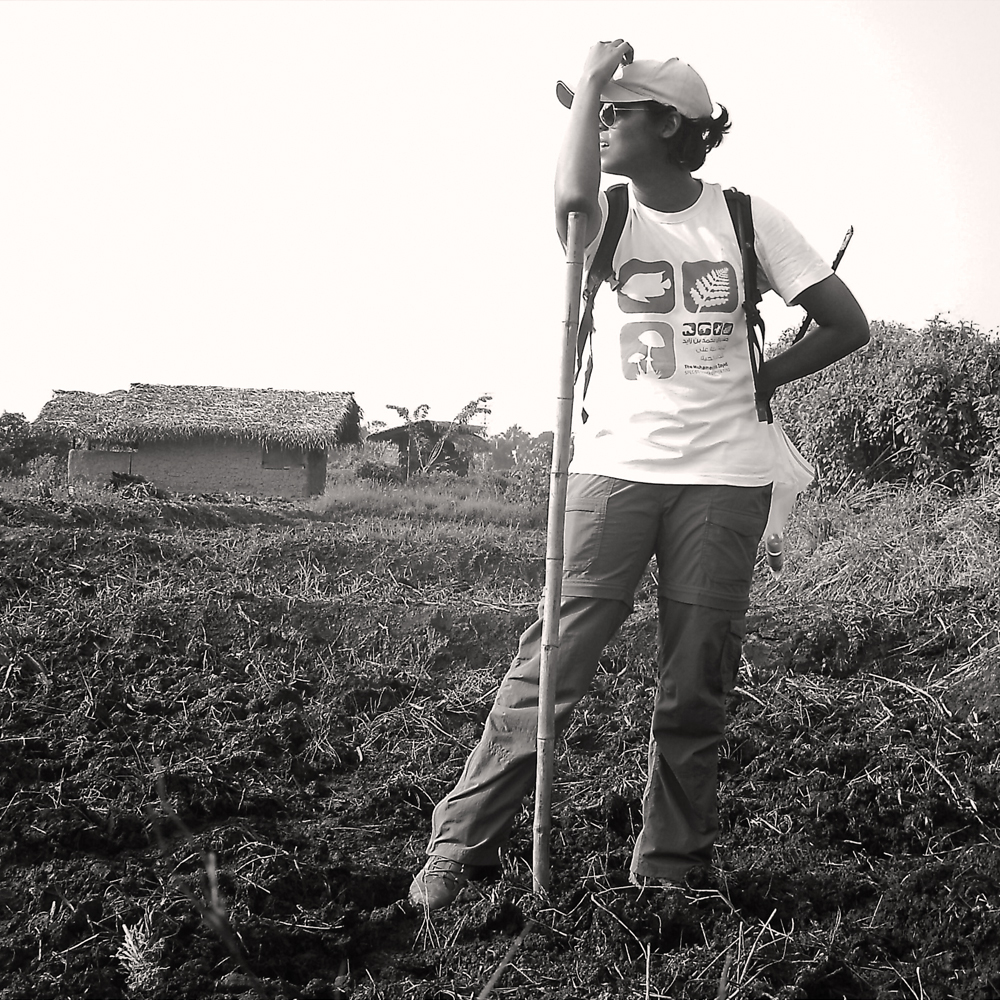 Like Aldo Leopold looking into the glowing green eyes of a wolf, that moment was pivotal for Ratnayaka. Today Ratnayaka is one of a number of GWC associate conservation scientists dedicated to saving the Fishing Cat from extinction and raising its profile as a flagship for conservation in Sri Lanka and beyond.

A Unique Cat of Cosmopolitan Habits

Little is known about the biology of this cat. They are striking animals, stocky and about twice the size of domestic cats. Spotted a bit like Leopards, they also sport stripes running down the back of their heads along their backs.

Native to regions throughout southern Asia, the Fishing Cat’s range and distribution is an open question. They have been recorded throughout south Asia, from far eastern Pakistan, India, Nepal, Sri Lanka, Bangladesh, Myanmar, Cambodia, Thailand and Indonesia. The IUCN Red List of Threatened Species classifies them as Vulnerable, but several distinct populations are endangered and they may have vanished entirely from the Indonesian island of Java. 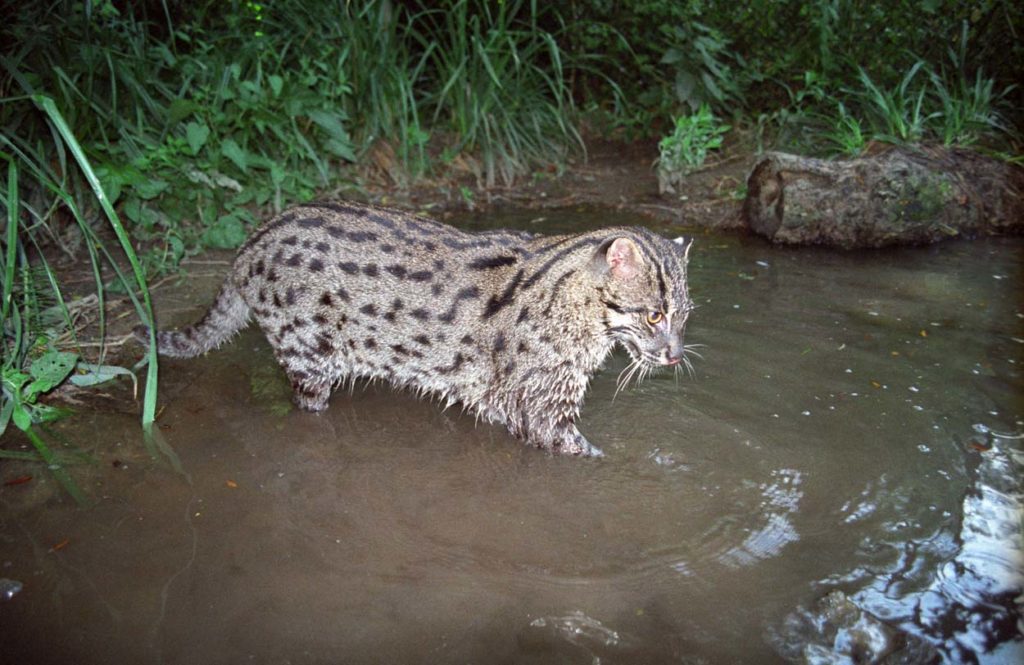 Fishing Cats are rare for their habit of…fishing. (Photo by Neville Buck)

Fishing Cats face a number of threats: they are hunted and poached for food and their hides. Their native marshland habitats are disappearing. They run into trouble when they eat people’s chickens, pets, and decorative fish. And they are mistaken for young Leopards and killed out of fear.

The main challenge in Fishing Cat conservation is that most people have never heard of the animal and consequently have no idea that it’s in need of conservation.

Fishing Cats are nocturnal and elusive. Their spots help them hide, and they are easily mistaken for a large domestic cat or a small Leopard. Their habits make them difficult to track and count. Camera traps are often the only way to study them.

Colombo is a wetland city—15 percent of it is urban wetlands—and this month received the Ramsar Wetland City Accreditation. Scientists knew that some Fishing Cats were living in the wetlands, but a remarkable individual showed Ratnayaka how little science knows about Fishing Cats’ habits and ability to adapt. 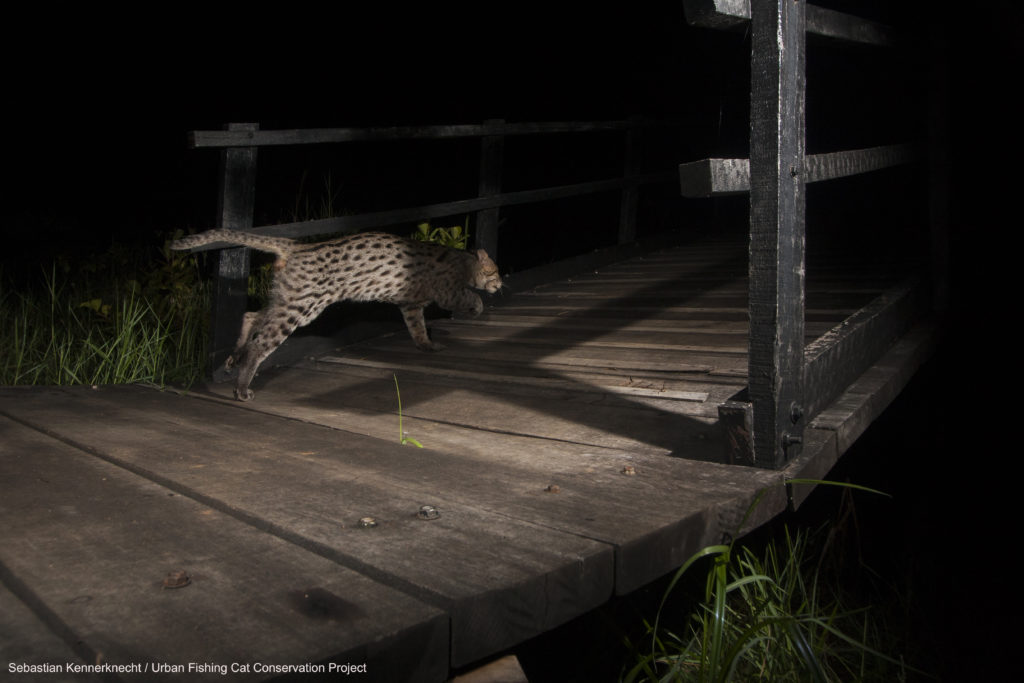 Ratnayaka has tracked Mizuchi the urban Fishing Cat since 2015.

Early one morning in 2015, Ratnayaka got a message from a friend showing a Fishing Cat lounging by a pond. It was, in fact, the pond outside her former office—a decorative pond, kilometers away from the nearest known marsh or Fishing Cat habitat.

She leapt out of bed and raced into work to discover that the Fishing Cat in question had just made a meal of dragon koi—very expensive ornamental fish. The Fishing Cat—now called Mizuchi—became a fixture at the pond and ate his way through a buffet of ornamental carp. Collaring and tracking Mizuchi and a handful of other Fishing Cats showed Ratnayaka that scientists were not being creative enough in where they looked for the animal.

Fishing Cats are turning up in gardens, on roofs, and, especially, eating ornamental fish. Ratnayaka has developed a relationship with the Sri Lankan Department of Wildlife Conservation and runs interference when Fishing Cats eat expensive fish. But much of the time, people are enchanted to learn that these cats, like little Leopards, are roaming the streets—and sewers—of Colombo.

Elsewhere in the Fishing Cat’s range, other GWC associates are learning similar lessons.

“My mission is to save small cats and their habitats worldwide,” says Dr. Jim Sanderson, GWC’s program manager of wild cat conservation. “It’s difficult to do by myself. We work with colleagues and friends living in their home countries around the world. And we reduce threats to the wild cats. We figure out what’s the threat and how to reduce it.”

Elsewhere in Sri Lanka, Ashan Thudugala has been monitoring Fishing Cats since 2013. He hosts workshops, camps, and classes to reach out to local villagers, especially children, to teach them about Fishing Cats, and the specific threats the felines face. He has also worked to decrease the number of Fishing Cats killed by vehicles and has helped rehabilitate and re-release orphaned and injured Fishing Cats. Together, he and Ratnayaka have formed Small Cat Advocacy and Research to raise awareness about Fishing Cats, Jungle Cats and Rusty-spotted Cats. 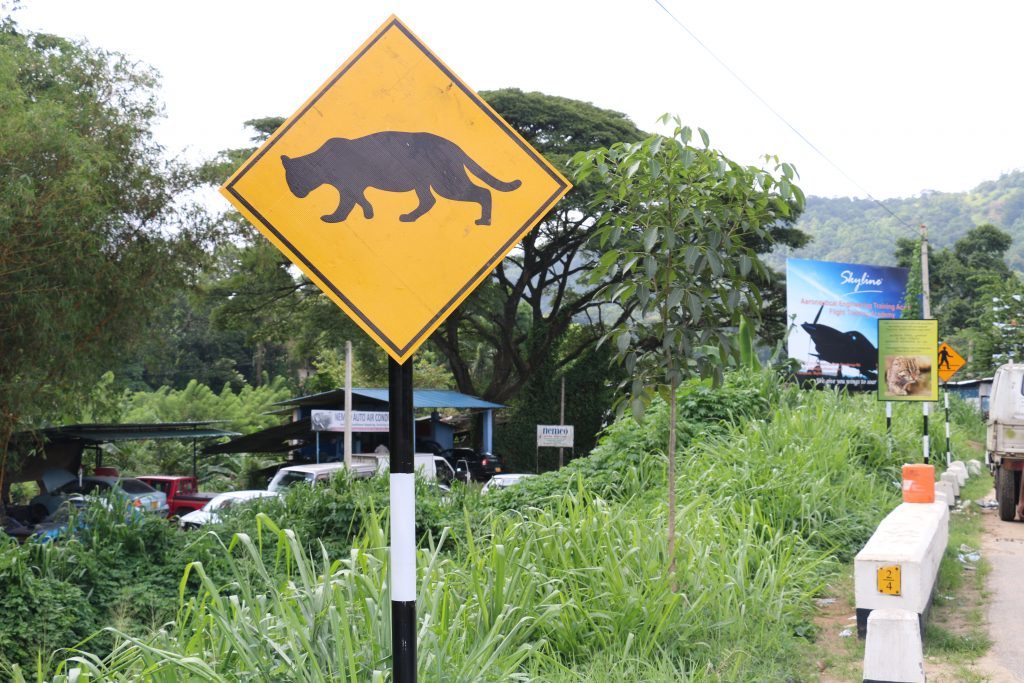 Small Cat Advocacy and Research in Sri Lanka is raising awareness about Fishing Cats, including their threats, such as vehicles. (Photo by Ashan Thudugala)

In Nepal, GWC associate Sagar Dahal has also documented Fishing Cats in human-dominated landscapes. He has been working to perfect a predator-proof chicken coop to keep the Fishing Cats away from people’s livelihoods, and educating government officials about the existence and plight of the Fishing Cat.

In India, Murthy Kantimahanti, another GWC associate, works primarily outside protected areas, where humans and Fishing Cats run afoul of each other. He sets camera traps and trains part-time research assistants from the local populations, in addition to educating local school children.

Just letting people know that an astonishing, and unexpected, animal lives in their midst is often enough to begin a conversation, especially with children. The researchers agree: working with locals in all of the Fishing Cat’s range countries is key to the success of protecting the animal.

“You don’t need a degree in wildlife to be a conservationist,” says Ratnayaka. “You must educate people. You can start small. Don’t just pay attention to the big animals. In Sri Lanka, everything is about the Leopard. There are other animals that are just as threatened that need just as much protection.”