Somewhere between the legend of King Le Loi, Asia’s counterpart of King Arthur, and the tale of the Loch Ness Monster exists the world’s rarest turtle, the Yangtze Giant Asian Softshell (Rafetus swinhoei), a species that can grow up to 330 pounds and lives an enigmatic life in the depths of Vietnam’s freshwater lakes and rivers. Until last week, biologists knew of only three of the Critically Endangered individuals left in the world, but spurred by a spirit of optimism and with the help of a little environmental DNA, a team led by the Asian Turtle Program of Indo Myanmar Conservation (ATP/IMC) has discovered another individual of the seemingly mythical species.

“I’ve always believed more animals can be out there—some of these lakes are large and complex and these animals are very secretive,” says Tim McCormack, program director for ATP/IMC. “Other examples exist for which species have been declared extinct only to be rediscovered again. These Lazarus species show how it’s possible to miss animals once they become extremely rare. We should never give up hope.” 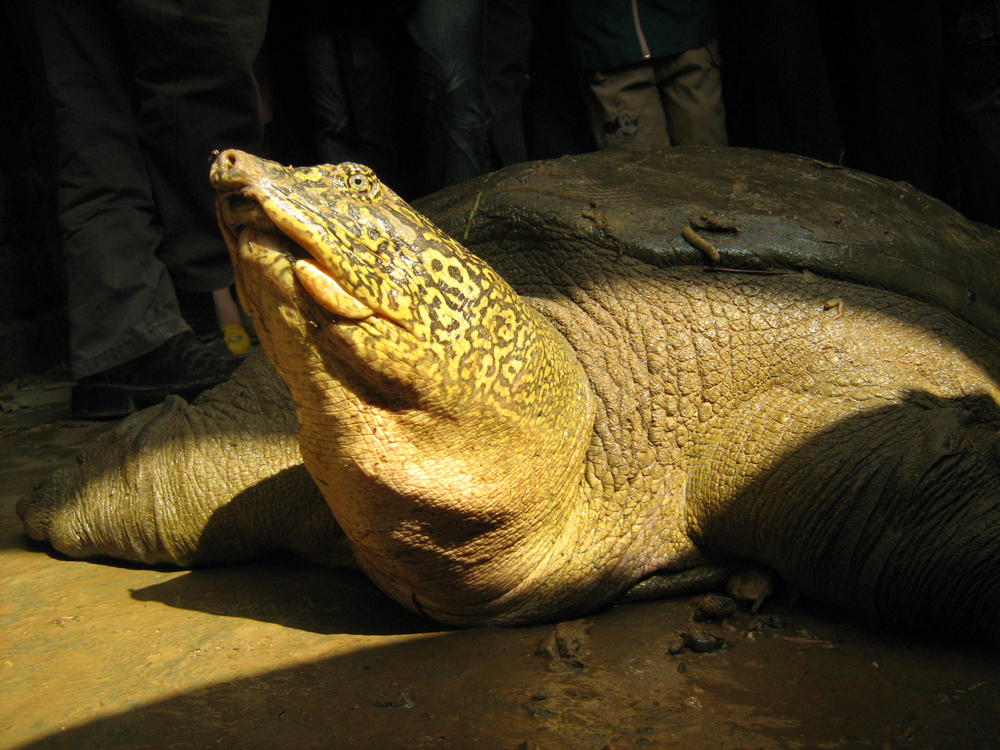 THE DONG MO LAKE YANGTZE GIANT ASIAN SOFTSHELL WAS CAUGHT FOLLOWING A DAM BREAK IN 2008. THE TEAM WAS ABLE TO RESCUE THE ANIMAL AND RETURN IT TO THE LAKE. VISITORS STILL REGULARLY SEE IT OUT IN THE WATER. (PHOTO BY TIMOTHY MCCORMACK, ATP/IMC)

The Yangtze Giant Asian Softshell, also known as the Swinhoe’s Softshell and Hoan Kiem Turtle, was once found throughout much of the Red River basin, but was heavily hunted starting in the 1970s. This, in addition to river damming, wetland destruction and water pollution have almost wiped out the species entirely, making it the most threatened of the top 25+ most endangered turtles. A pair of the turtles that came from the Yangtze River in China, currently lives in captivity in China at the Suzhou Zoo, but the two have not successfully produced offspring, despite opportunities to breed naturally and veterinarians’ attempts at artificial insemination. A third Yangtze Giant Asian Softshell lives in the wild in Dong Mo Lake just west of Hanoi. The ATP/IMC-led team discovered this fourth turtle in Xuan Khanh Lake, not far from Dong Mo Lake. 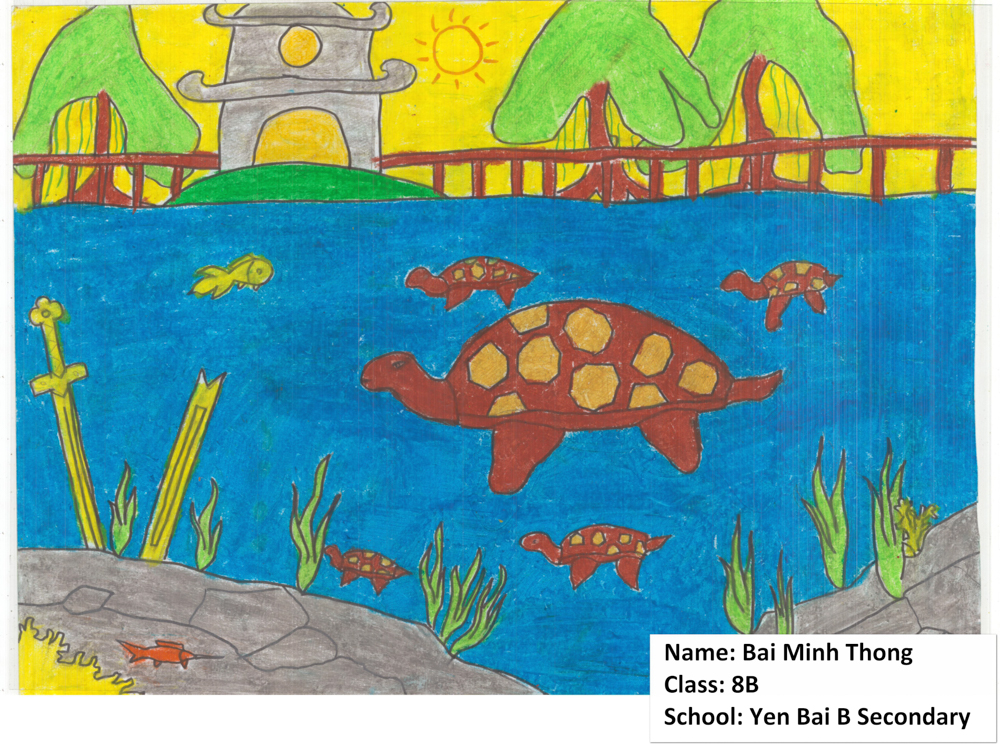 ARTWORK FROM AN ATP/IMC-RUN ART COMPETITION FOR CHILDREN IN SCHOOLS AROUND DONG MO LAKE. (COURTESY OF THE ATP/IMC)

“This is incredibly good news for our efforts to save this species from extinction,” says Peter Paul van Dijk, a Global Wildlife Conservation associate conservation scientist and field conservation programs director for the Turtle Conservancy. “If this newly discovered animal can be brought together with the known animal in Dong Mo, and if it is of the opposite sex, the likelihood of successful breeding in the near future has increased by orders of magnitude. These are big ‘if’s,’ but this additional animal completely changes the prospects of this species—for the better.”

Though some unsubstantiated sightings of a Yangtze Giant Asian Softshell paddling Xuan Khanh Lake were claimed over the years, it wasn’t until 2016 that ATP/IMC received an especially encouraging report of an animal there. In response, over the first half of 2017 the team spent thousands of hours watching the lake until finally in May, former fisherman and current ATP/IMC conservationist Nguyen Van Trong seemingly struck gold, capturing a fuzzy image of the hog-like snout of a Yangtze Giant Asian Softshell peeking up out of the water. 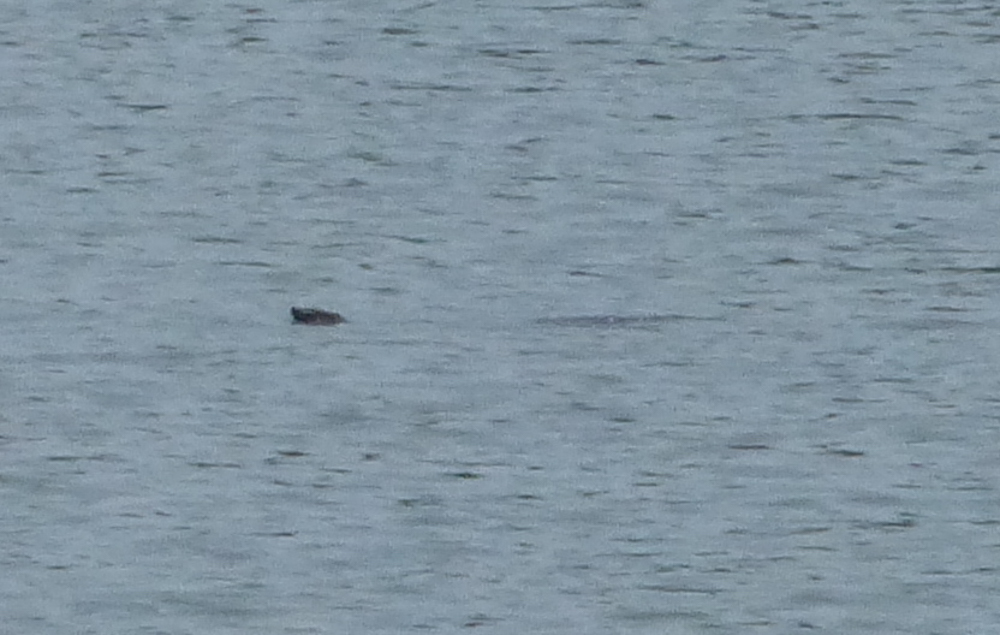 “I am so happy that our work has paid off,” Trong says. “It’s my pleasure to protect this species and the Vietnamese culture attached to the species.”

Buoyed by the photographic evidence, the ATP/IMC recently partnered with the Turtle Survival Alliance and Washington State University’s Dr. Caren Goldberg to use environmental DNA—a relatively new, innovative technique—to determine beyond a doubt that the Yangtze Giant Asian Softshell still survives in Xuan Khanh Lake. This tool allows biologists to collect a water sample and test it for the tiniest amounts of a species’ DNA to confirm an animal of a particular species is there. Although the team had to analyze many negative samples before finding a positive match, the results suggest that Xuan Khanh Lake is home to at least one legendary Yangtze Giant Asian Softshell, if not more. 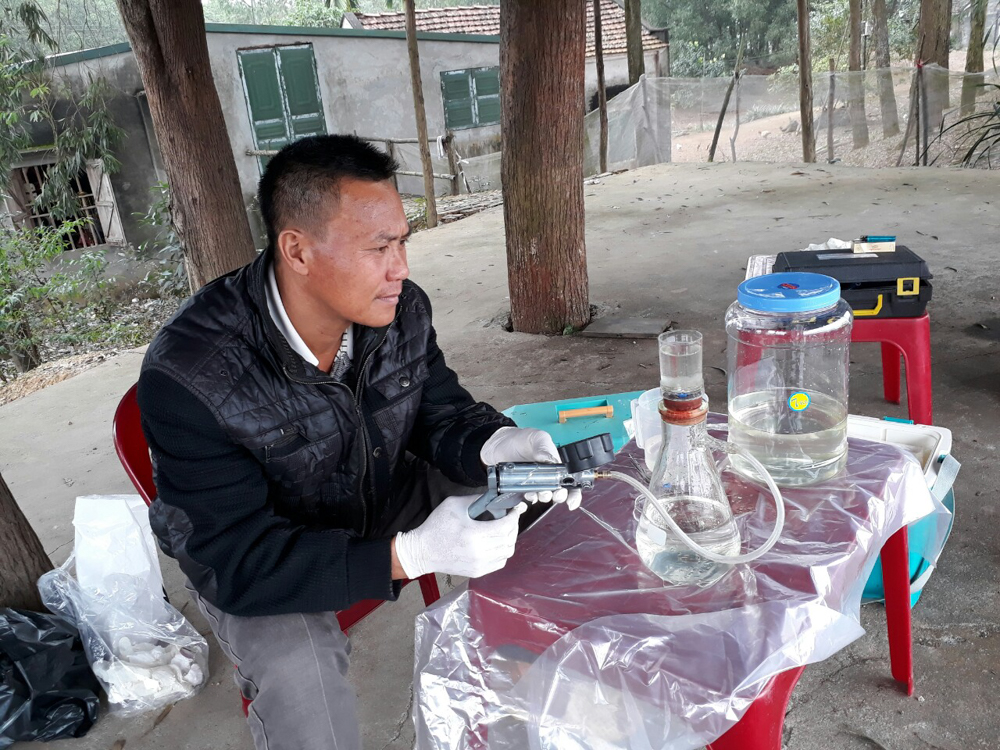 “It was very exciting when the sequences came back clean and clearly a match to archived sequences from this species, providing a very promising piece of evidence that the turtle in the photo is a Swinhoe’s Softshell,” says Goldberg, who was an early eDNA pioneer. “eDNA is a great tool for detecting species that are hard to find, which includes a lot of ‘lost’ species.”

Looking After a Legend

While the discovery of a fourth Yangtze Giant Asian Softshell has significant scientific implications in the conservation of the species, it is also important culturally for a species that is perhaps the most celebrated turtle in all of Vietnam. The turtles in Hoan Kiem Lake, a lake located in downtown Hanoi, are part of a 15th century legend that King Le Loi returned a magical sword to a giant turtle in the lake following the sword’s use in defeating an invading army from the North. The legend has imbued the turtle from Hoan Kiem Lake with a sacred, almost god-like status, in Vietnam.

“This species is so impressive with its sheer size, but when you consider the legend of King Le Loi and the cultural importance of the species, it really is quite unique,” McCormack says. “I always describe it as a cross between the King Arthur and the Lady of the Lake tale and the legend of the Loch Ness Monster.” 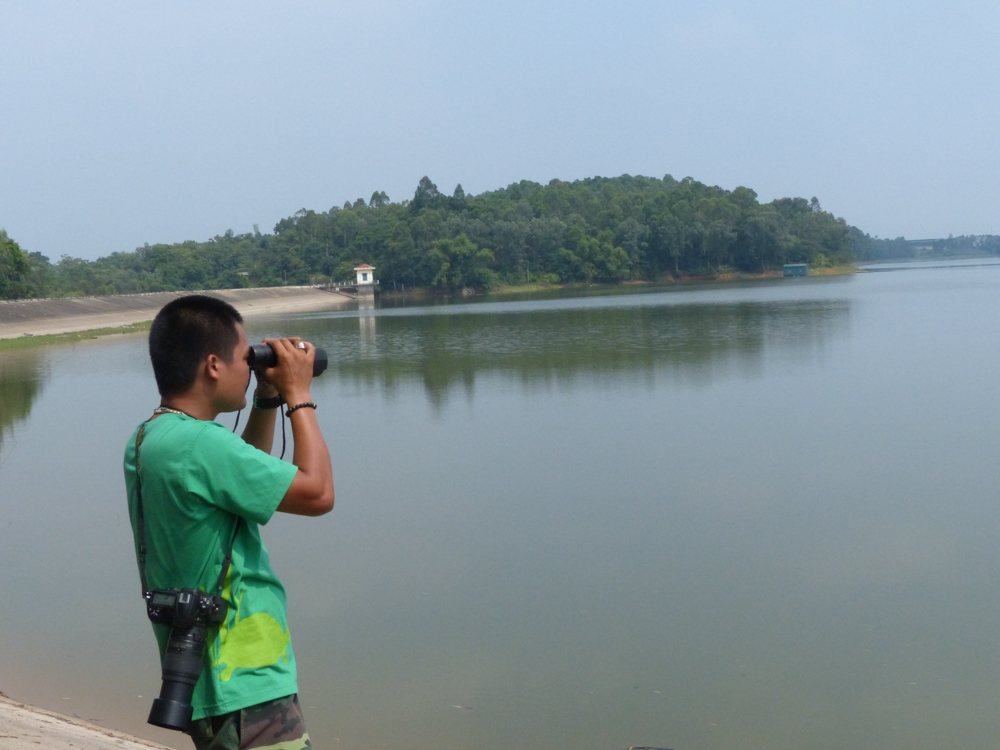 ATP STAFF OBSERVATIONS AT XUAN KHANH LAKE IN MAY OF 2017. (PHOTO BY NGUYEN VAN TRONG, ATP/IMC)

Since 2003, ATP/IMC has conducted interviews in search of the legendary turtle throughout much of Vietnam, including with locals in 18 provinces with lakes, wetlands and rivers that were once home to the species. At most sites, however, the turtle has vanished entirely. Now the team has a new opportunity to help save the species from extinction, not only with a new individual they can match for breeding potentially in a captive-breeding program with the others, but by using the excitement around the discovery to call for further protection of the animal. 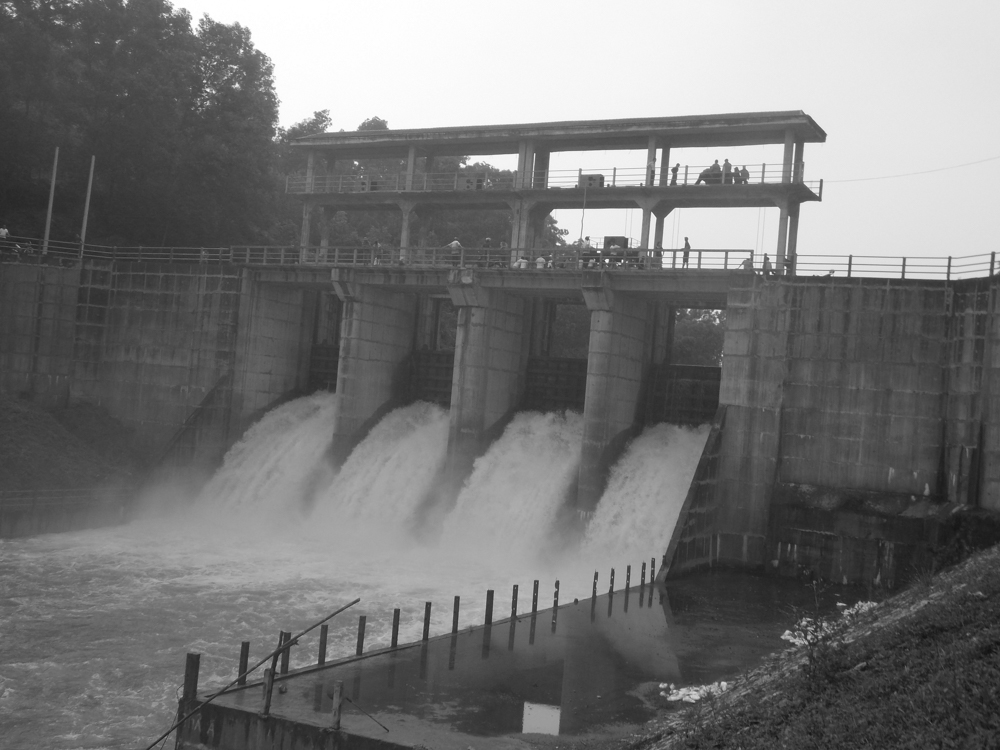 “After six years, I am so happy to have found the fourth individual, bringing hope for a breeding program in Vietnam for the species,” says Nguyen Tai Thang, the Rafetus officer responsible for managing the surveys for the species.

Intensive fishing is ongoing on Xuan Khanh Lake, McCormack says, so authorities are on standby and the ATP/IMC has alerted the Forest Protection Department (FPD), police and national authorities. Since 2013, the species has been protected under national law. 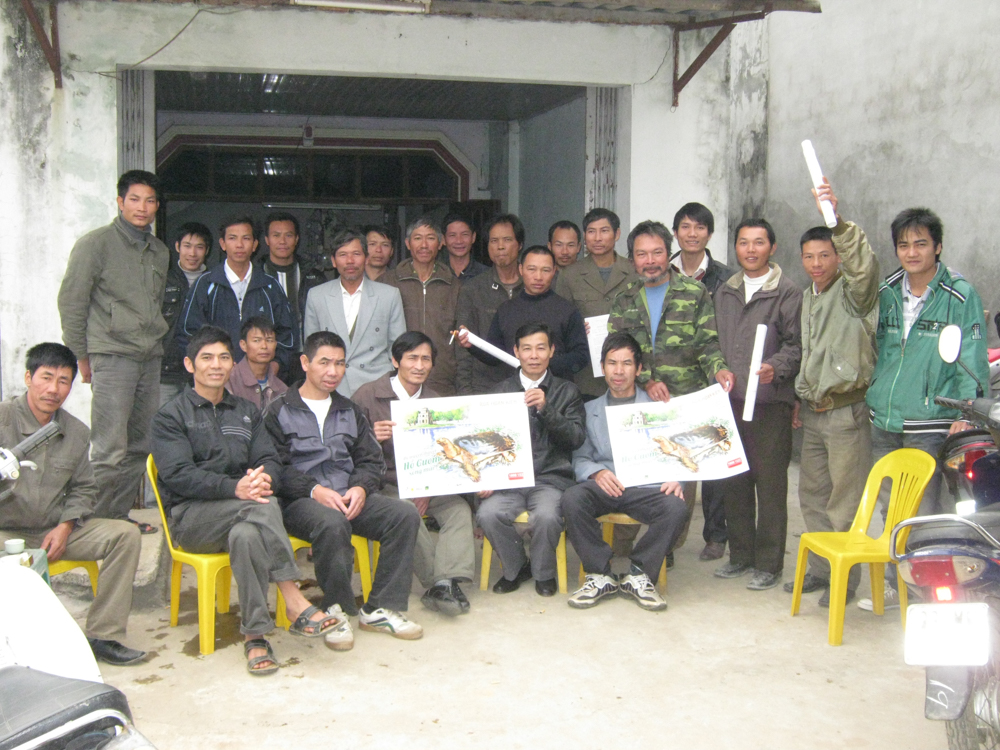 EVERY YEAR ALL THE FISHERMEN IN DONG MO LAKE SIGN NO HUNTING AGREEMENTS FOR LARGE TURTLES WITH THE LAKE OWNER, ATP, POLICE AND THE FOREST PROTECTION DEPARTMENT (FPD). (PHOTO BY HOANG VAN HA, ATP/IMC)

This discovery also bolsters hope for the rediscovery of The Search for Lost Species’ “most wanted” lost turtles and tortoises, and for the future of other imperiled turtle species that the ATP/IMC is working on, including the Vietnamese Pond Turtle (Mauremys annamensis) and Southern Vietnamese Box Turtle (Cuora picturata).

“Having lost the Pinta Island Tortoise to extinction a few years ago as Lonesome George died, I am hopeful that this species, the next turtle in line at the extinction abyss, can have a different fate,” van Dijk says. “Time will tell if our hopes for the survival of this species will become reality, or will be dashed. For the moment, we live in hope and optimism, and feel encouraged, energized, to do whatever can be done for these weird but wonderful animals.”