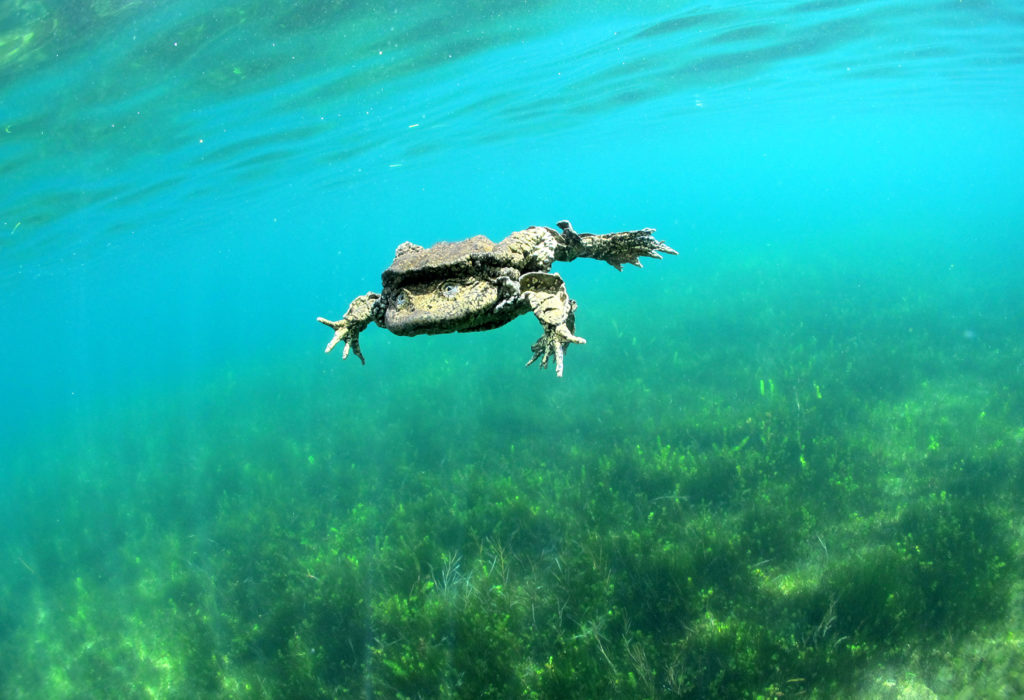 Global amphibian experts from the IUCN SSC Amphibian Specialist Group, Global Wildlife Conservation, Amphibian Survival Alliance and Amphibian Ark, are calling on NGOs and the governments of Bolivia and Peru to continue and even bolster binational conservation measures for the Titicaca water frog to prevent the extinction of what is arguably the world’s largest fully aquatic frog.

A recent assessment by the International Union for Conservation of Nature—the global authority for assessing the extinction risk for species around the world—has determined that the Titicaca water frog is endangered, rather than critically endangered, as previously reported. The change in status does not reflect a change in the severity of threats to the species, but instead revises the rate of population decline over the last 40 years or so to 50-70 percent, putting it in the endangered category under IUCN Red List of Threatened SpeciesTM criteria.

“The 2004 listing was precautionary based on the information available at the time,” said Arturo Muñoz, regional co-chair of the Bolivian branch of the Amphibian Specialist Group. “But the reality on the ground is unchanged—or even worse than it was 16 years ago when the last assessment was conducted. The Titicaca water frog continues to experience mass die-offs and could go extinct in our lifetime unless conservationists and the governments of Bolivia and Peru remain vigilant and advance our binational conservation work for the species.”

The frog is found only in Lake Titicaca—South America’s second largest lake—and its adjacent water bodies, which are shared by Peru and Bolivia. Lake Titicaca is a Key Biodiversity Area, or a site of global importance to the planet’s overall health and the persistence of biodiversity. In addition, the lake is a Ramsar Site of International Importance.

The Titicaca water frog faces an onslaught of threats, including pollution in Lake Titicaca, illegal trade for pets and food (including in “green smoothies” sold at markets) and medicinal products (for use as an aphrodisiac and to treat various ailments), introduced trout and silverfish that prey on tadpoles, and disease. The ongoing decline in the species has been exacerbated by massive die-offs that were reported nearly every year between 2009 and 2016. In 2015, 80 percent of the population that lived in Lago Menor, the small side of Lake Titicaca on the Bolivia side, was wiped out. In 2016, more than 10,000 frogs were found dead on the Peruvian side of the lake, likely the result of increased sewage runoff.

“There have been some amazing champions working on the ground both in Bolivia and Peru to prevent the extinction of this species and to inspire the political will to join these efforts,” said Ariadne Angulo, co-chair of the IUCN SSC Amphibian Specialist Group. “And we have been inspired by both governments working collaboratively with one another and hand-in-hand with conservation groups in recent years. Given the threats that the species continues to face, however, the efforts to date are the building blocks for what it is going to take to save the Titicaca water frog in the long-term.”

Amphibian conservation experts are now calling on the governments of Bolivia and Peru to continue to implement the actions laid out in the binational plan, which include reducing the illegal trade and sale of the species; strengthening the cross-border comprehensive management of the ecosystems where the species lives to mitigate the threats of pollution, invasive species and disease; and increase outreach efforts to local communities about the importance of conserving the Titicaca water frog.

Experts are also encouraging the governments to work with local conservationists on undergoing regular, systematic population surveys across the lake to better understand how many frogs still exist, where they live, threats to the largest populations, and the best way to implement conservation measures.

“We applaud the conveners of the binational action plan for balancing the need for action with the need for research,” said Jennifer Luedtke, GWC’s manager of IUCN Red List assessments. “While more information will be useful in guiding effective conservation, the IUCN Red List flagged this as a species of global concern in 2004. Urgent support is needed to scale up efforts to date and halt the decline of the Titicaca water frog toward extinction.”

“The Titicaca water frog is one of the most important and emblematic species of the Lake Titicaca ecosystem. On one hand, it has deep cultural roots, and on the other, it has ecological importance within the lake system because it contributes to the persistence of ecological processes.”

"This iconic frog, well known among the locals, contributes to making Lake Titicaca so famous. Because it is a sensitive species, protecting this frog means protecting the entire ecosystem. Thus, the Titicaca water frog represents a flagship for the conservation of the lake."

The Amphibian Specialist Group (ASG) is part of the Species Survival Commission (SSC) of the International Union for Conservation of Nature (IUCN). It provides the scientific foundation to inform effective amphibian conservation action around the world. Under the umbrella of the ASG, the Amphibian Red List Authority oversees the assessments of all amphibians on The IUCN Red List of Threatened Species. ASG, together with ASA and Amphibian Ark, share a common vision of “Amphibians thriving in nature”. Learn more at https://www.iucn-amphibians.org/.

The Amphibian Survival Alliance (ASA) promotes the conservation of amphibians and their habitats through dynamic partnerships worldwide. The ASA raises awareness of amphibians and their plight, and helps channel vital resources towards the implementation of vital conservation actions, as guided by the global Amphibian Conservation Action Plan., ASA works working directly with the IUCN SSC Amphibian Specialist Group and Amphibian Ark to achieve the shared vision “Amphibians thriving in nature”. ASA champions the extraordinary work of its partners and seeks to recruit diverse new partners to build a strong, collaborative future for amphibian conservation. Learn more at www.amphibians.org.

The Amphibian Ark works to ensure the survival and diversity of amphibian species focusing on those that cannot currently be safe-guarded in their natural environments.  Our conservation grants and capacity building programs provide support to institutions engaged in amphibian rescue efforts, and our Conservation Needs Assessment helps prioritize species for conservation action.  Information on these and other programs can be found at amphibianark.org.