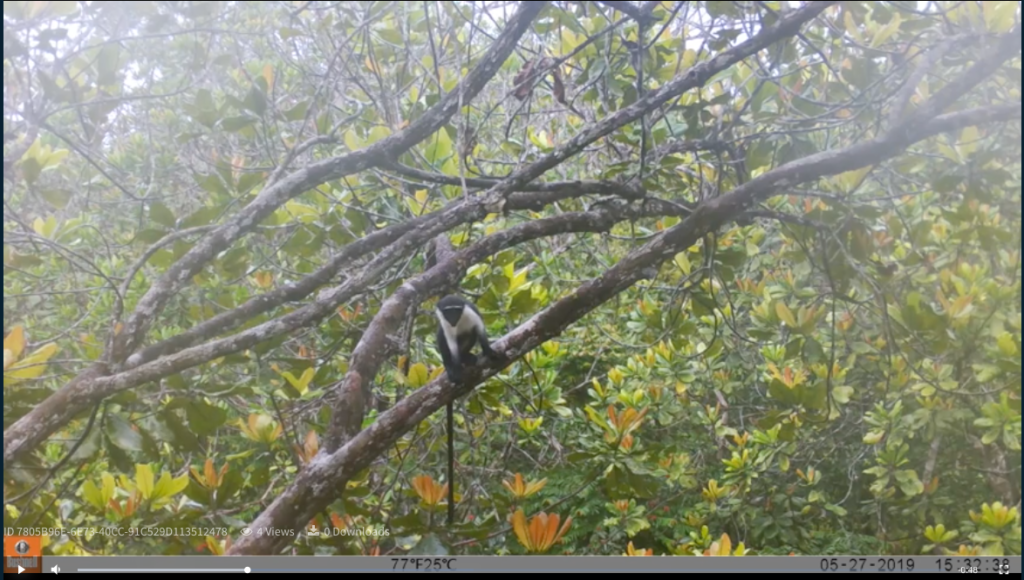 Although the quest to find Miss Waldron’s red colobus monkey—a species lost to science since 1978—has not yet uncovered photographic evidence of the monkey in question, it has so far produced striking footage of other rare and endangered primates. This includes the critically endangered white-thighed colobus, endangered white-naped mangabey, and the first-ever video of a critically endangered roloway monkey in the wild, captured high in the canopy of Côte d’Ivoire’s Tanoé-Ehy Forest in west Africa.

Inza Koné, the initiator and leader of the Tanoé-Ehy community-based conservation project, said that he is full of hope. “Camera trapping proves to be a powerful tool to detect rare species,” he said. “Getting footage of roloway and most other primates expected in the Tanoé-forest suggests that there is a chance to get footage of Miss Waldron’s red colobus in addition to one to several of these species.”

Since May of 2019, a team led by the Swiss Center for Scientific Research in Côte d’Ivoire and Florida Atlantic University has strategically set up 29 camera traps in key locations in the canopy of the Tanoé-Ehy Forest in search of Miss Waldron’s red colobus. Tanoé-Ehy Forest is a Key Biodiversity Area, or a site of global importance to the planet’s overall health and the persistence of biodiversity, and the last likely habitat for Miss Waldron’s red colobus.

The locations for setting the camera traps—including specific trees—was partially informed by interviews with 13 local community members in six communities about possible Miss Waldron’s red colobus sightings. One participant could even accurately mimic the specific call of the monkey.

The team has analyzed more than 22,000 videos, revealing 23 arboreal mammals. In addition to getting video of six of the seven monkey species known to live in the Tanoé-Ehy Forest, the team also got footage of giant squirrels, flying squirrels, pangolins, birds, dormice and dwarf galagos. Another set of 54 cameras are currently set up to record video in a different set of trees, and the team hopes to do one final round of surveys in the very center of the swamp, where it is difficult for both researchers and hunters to reach.

“Tropical mammals in general are hard to study, but the arboreal ones add so much complexity,” said Daniel Alempijevic, a graduate student at Florida Atlantic University who has helped lead the expeditions, including physically setting up the cameras high in the treetops. “These canopy camera trap surveys are opening up a new world to us, and may ultimately be the key to finding Miss Waldron’s red colobus. But Miss Waldron’s or not, so far this has been an exceptional survey reinforcing just how important Tanoé-Ehy Forest is as a last refuge for some of these species.”

Miss Waldron’s red colobus is one of 18 distinct forms of red colobus monkeys (scientists are unclear about how many species there are), which are the most threatened group of non-ape primates in mainland Africa. Their disappearance is often the first indication of the decline of a healthy ecosystem. And because their range overlaps with more than 75 percent of all primate species on mainland Africa, their protection can benefit countless other species.

Global Wildlife Conservation helped establish a Red Colobus Working Group under the African Primatological Society and IUCN SSC Primate Specialist Group, which is coordinating a range-wide effort aimed at preventing the extinction of red colobus monkeys and putting them on the path to recovery. This effort is guided by the comprehensive Red Colobus Conservation Action Plan and implemented by organizations and individuals across the range of the red colobus through the Red Colobus Conservation Network. This would include conservation action for Miss Waldron’s red colobus and Tanoé-Ehy Forest if the species is rediscovered.

“Red colobus monkeys are always the first large animal to be hunted from a forest and so act as the proverbial canary in the coal mine for African forest conservation,” said Barney Long, Global Wildlife Conservation’s senior director of species conservation. “Miss Waldron’s red colobus is the canary of the whole group of red colobus monkeys; if we can find it, save it, and recover it, it will act as a beacon of hope for the group and African forest wildlife. If we can’t find it and have to declare it extinct, it will be a shocking wake-up call to the world that our closest relatives are not threatened with extinction but actually going extinct because of us and that we must take urgent action to prevent Miss Waldron’s red colobus from being the first of many primate extinctions.”

This project was made possible in part by the generous funding and support of the Margot Marsh Biodiversity Foundation, Primate Action Fund, The Biodiversity Consultancy, Barcelona Zoo, Mulhouse Zoo, Florida Atlantic University and Global Wildlife Conservation.

The Search for Lost Species is the largest-ever quest to find and conserve wildlife lost to science for at least a decade. GWC has confirmed the rediscovery of three species from its 25 most wanted lost species list: Jackson’s climbing salamander in Guatemala, and both the Wallace’s giant bee and the velvet pitcher plant in Indonesia. GWC and partners will provide updates on the search for Miss Waldron’s red colobus as new footage is collected and analyzed.

“The most surprising result from the interviews with members of the local communities was their good description of the animal, especially those we interviewed around the Tanoé-Ehy Forest and could mimic the call of the red colobus. The interviews indicate that Miss Waldron’s may still be present in Tanoé Forest.”

“Even though red colobus monkeys are thought to be the most threatened taxonomic group of primates in Africa, little is known about them because they don’t usually get the attention they deserve. I think it’s time for the red colobus monkeys to shine.”

“Miss Waldron’s red colobus, like other primates, plays an important role in the dispersal of seeds, in the regeneration of the forest, in the general maintenance of the balance of the ecosystem. This colobus is also part of the richness of the world’s biological heritage. The extinction of the species would be a great loss for humanity.”

Photo: Screen shot of the first-ever footage of the critically endangered Roloway Monkey in the wild. (Video courtesy of FAU/CSRS/GWC)

CSRS is a multidisciplinary research center established in Côte d’Ivoire since 1951 with a regional mandate for research, capacity building, and services. Its mission is to generate credible evidence through science and serve as a platform for partnerships for capacity building and translating research results into inter-sectoral development action. Learn more at https://www.csrs.ch

Florida Atlantic University, established in 1961, officially opened its doors in 1964 as the fifth public university in Florida. Today, the University, with an annual economic impact of $6.3 billion, serves more than 30,000 undergraduate and graduate students at sites throughout its six-county service region in southeast Florida. FAU’s world-class teaching and research faculty serves students through 10 colleges: the Dorothy F. Schmidt College of Arts and Letters, the College of Business, the College for Design and Social Inquiry, the College of Education, the College of Engineering and Computer Science, the Graduate College, the Harriet L. Wilkes Honors College, the Charles E. Schmidt College of Medicine, the Christine E. Lynn College of Nursing and the Charles E. Schmidt College of Science. FAU is ranked as a High Research Activity institution by the Carnegie Foundation for the Advancement of Teaching. The University is placing special focus on the rapid development of critical areas that form the basis of its strategic plan: Healthy aging, biotech, coastal and marine issues, neuroscience, regenerative medicine, informatics, lifespan and the environment. These areas provide opportunities for faculty and students to build upon FAU’s existing strengths in research and scholarship. For more information, visit fau.edu.