The Search For Lost Species: Global Wildlife Conservation To Launch Most Extensive Worldwide Quest For Species Not Seen In Decades 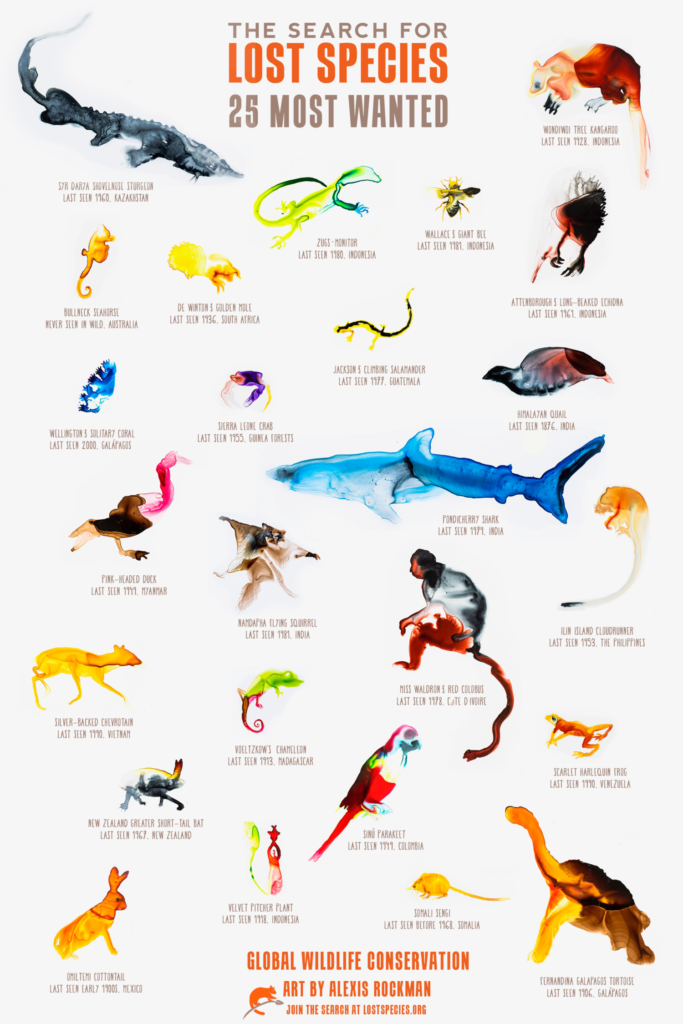 Global Wildlife Conservation today embarks on the first phase of the Search for Lost Species, the largest-ever global quest to find and protect species that have not been seen in the wild in decades. The campaign will work with local partners to send scientific expeditions around the world to some of the most remote and uncharted wild places on Earth in search of 25 “most wanted” species. These species represent flagships for conservation.

The list of top 25 “most wanted” species spans across groups of wildlife and geography and includes the Wondiwoi tree kangaroo, last seen in 1928 in Indonesia and deemed a “zoo-geographical mystery;” the pink-headed duck, with its bright-pink plumage, last seen in 1949 in India; the Fernandina Galápagos tortoise, last seen in 1906 on the Galápagos’s youngest and least-explored island; the bullneck seahorse from Australia, a tiny seahorse never before seen in the wild; and a colorful tree-climbing freshwater crab from the Upper Guinea forest block last seen in 1955. Collectively the top 25 species have not been seen in more than 1,500 years.

“These species include quirky, charismatic animals and plants that also represent tremendous opportunities for conservation,” said Robin Moore, GWC communications director and conservation biologist. “The rediscovery of any of these elusive species will help unlock its mysteries, providing us with the valuable information we need to understand and best conserve the species, its habitat and the wildlife that share its habitat. While we’re not sure how many of our target species we’ll be able to find, for many of these forgotten species this is likely their last chance to be saved from extinction.”

While there is no standard definition of what constitutes a “lost” species, the top 25 flagship species have not been seen since before 2007 and are listed in descending order of threat as critically endangered (possibly extinct), critically endangered, endangered, vulnerable or data deficient by the IUCN Red List of Threatened Species. With the help of more than 100 of the IUCN Species Survival Commission’s Specialist Groups, Austin-based GWC compiled a total list of more than 1,200 species considered lost across more than 160 countries. The definition of “lost” varied by taxa. The list of all 1,200 lost species is also available to the public to submit additional nominations and to launch searches for species on this broader list, or to report an observation on iNaturalist.

“Expeditions for lost species are going to take scientists across the planet from the dark depths of the ocean to the bottom of rushing freshwater rivers, from the lush jungles of the tropics, to the seemingly barren wastelands of the desert,” said Don Church, GWC president and director of conservation. “The hope that we can preserve as much of Earth’s beauty and wonder as possible will drive the adventurers to overcome the elements, logistical mishaps and the race against time.”

The first phase of the Search for Lost Species will include raising funds for expeditions to launch this fall, with a fundraising goal of $500,000. GWC will be seeking corporate sponsorships, individual donations and partners to support the expeditions. These efforts include fundraising at events in Austin and New York City this month and an auction of Lost Species artwork, including a painting of the pink-headed duck created by artist James Prosek specifically in support of the initiative. The Search for Lost Species has already received support from close GWC partner Turtle Conservancy and artist Alexis Rockman, who has captured the beauty of each of the 25 top species—even those where no photos or sketches exist—for the campaign.

“We have been amazed by the overwhelmingly enthusiastic response to the concept of the Search for Lost Species initiative,” said Lindsay Renick Mayer, GWC’s associate director of communications. “We’re clearly in need of some good news for wildlife and are certain that the stories of adventure and hope that emerge from this campaign will provide a powerful antidote to the despair that today dominates headlines about the future of our world’s wildlife and wildlands.”

The global search begins at https://lostspecies.org/.