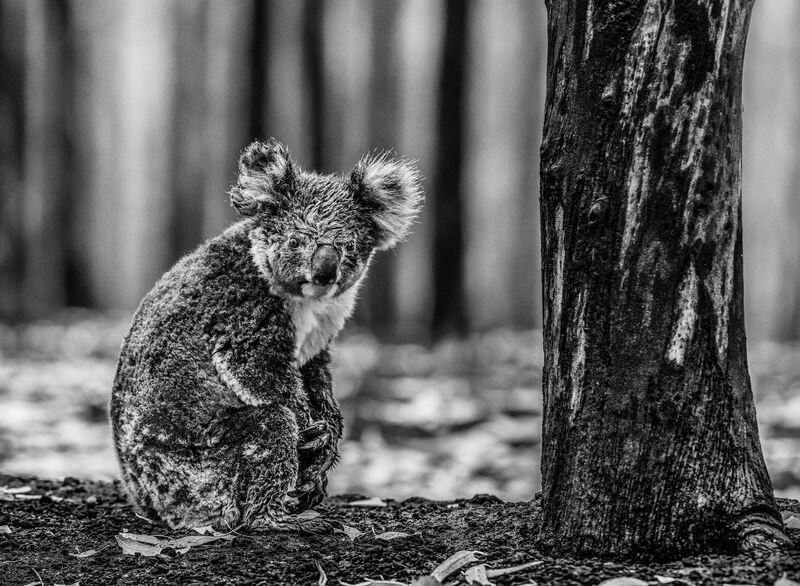 Over the course of the last 10 days, photographer David Yarrow has been in Australia documenting the devastating bush fires that have destroyed communities, wildlife and wildlands. Using the striking and poignant images that he captured of the effects of the fire, Yarrow and environmental nonprofit organization WildArk is today launching the #KoalaComeback Campaign to raise $2 million to support recovery efforts in Australia. Fifty percent of the proceeds will be directed to Earth Alliance’s Australia Wildfire Fund, and WildArk will use the remaining donations to support local organizations working on wildlife rehabilitation and habitat restoration.

"The day in Australia when I saw 500 dead animals for every live one will remain with me forever,” Yarrow said. “This is a call to arms and we are blessed with a celebrated army of passionate conservationists. I hope that this photograph of a lone koala I found sitting dumbfounded at the base of a tree, which we are calling ‘Survivor,’ becomes known and emblematic of a period in time when we all became aware of our planet’s deep fragility—and that it can help us raise money to make a difference."

Donors who make a contribution of $1,000 will receive a signed 24” x 33” print of ‘Survivor’ delivered to their homes. Yarrow’s large monochrome black and white images typically sell for upwards of $50,000 and sometimes as much as $100,000. Donors who make a contribution between $10 and $100 will receive a downloadable file of ‘Survivor.’ All donors will receive an automated email with the watermarked image alongside instructions about how to spread the message further and encourage more donations.

WildArk is a global conservation effort that was founded in 2016 to help support the protection of species and ecosystems worldwide. The Australia Wildfire Fund was launched in January by Aussie Ark, Earth Alliance and Global Wildlife Conservation to directly support on-the-ground efforts to restore Australia’s wildlife and wildlands.

“This is a dark time for Australia and one that David Yarrow has captured in his photography in a powerful and particularly moving way,” said Don Church, Global Wildlife Conservation president. “With the support of individual champions around the world who want to help, we have a chance to continue to respond to these fires, recover from them, and even to help prevent them in the future. Australia’s unique wildlife and ecosystems depend on a global response to this crisis and the Australia Wildfire Fund is meant to funnel that support to make the biggest impact on the ground.”

The recent wildfires are the worst in Australia in decades, particularly in New South Wales. The conditions have been exacerbated by drought, negative agricultural practices, and strong winds that have caused the fires to spread rapidly. The fires have killed, injured and displaced some of Australia’s most unique animals, including koalas, kangaroos and platypuses. Wildlife experts estimate that more than a billion animals have been killed, including up to 30 percent of the koala population living in New South Wales. This is particularly devastating for the country with highest rate of mammalian extinctions on Earth.

“‘Survivor’ portrays the heartbreaking bleakness of this crisis, but it also serves as a symbol of hope for the future; the solidarity behind this effort has been inspiring,” said WildArk CEO John Hardman. “The koala, as an iconic Australian animal, represents all of the wild places in need of restoration. Supporting species rehabilitation and habitat restoration throughout their native range will be essential for the koala recovery process and for the thousands of other species who are represented in these targeted areas.”

WildArk’s mission is to promote and support activities that educate, enable, provide resources or inspire humanity to sustainably conserve, protect or restore the environment and the world’s ecosystems, natural resources, wildlife and wild places. The mission is manifested through positive storytelling, scientific research, supporting wildlife conservation and investing in space for the wild.  Learn more at www.wildark.org.

David Yarrow’s evocative and immersive photography of life on earth is most distinctive and he is generally recognised as one of the best selling, if not the best selling, fine art photographer in the world. Philanthropy and conservation are central to David Yarrow’s passion to document the animal and human world in a fresh and creative way. In 2019 Yarrow’s work raised over $3 million for charitable causes. Learn more at davidyarrow.photography