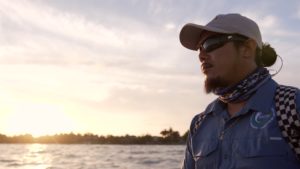 Threatening encounters with poachers. Inadequate equipment. Weeks away from family. Little job security. Government-employed park rangers in Central American countries described a challenging and often inhospitable work environment in their responses in a recent survey (English | Spanish) on their wellbeing and working conditions conducted by Global Wildlife Conservation, Panthera, the global wild cat conservation organization, the Wildlife Conservation Society (WCS) and local partners. Yet despite these conditions, nearly 77 percent of the survey participants said they’d like to see their children take up the profession.

“These incredible individuals take tremendous pride in protecting the region’s biodiversity,” said Chris Jordan, Central America and Tropical Andes coordinator for Global Wildlife Conservation. “They are sacrificing so much to help ensure a prosperous and sustainable future not only for their own countries, but for the planet as a whole. It is imperative that we acknowledge how important their role is by providing them all the same kinds of protections that we afford other first responder professions.”

While in some countries and protected areas, rangers described a positive work environment, 70 percent of the participants surveyed indicated that they felt they did not have the proper equipment or amenities to ensure their safety. Though nearly 65 percent of the participants are permanently employed, many of the younger rangers said their contracts are temporary, offering little security and no clear career path. And half of the rangers indicated that they see their families only five to 10 days a month. Most notably, 77 percent of the survey participants said that they have faced a life-threatening situation on the job, including threats from or attacks by poachers and local community members, or dangerous encounters with wildlife.

“Like jaguars, park rangers across Central America serve as fearless ecosystem guardians, whose protective presence helps to determine the survival of so many threatened species and wild lands,” said Roberto Salom, Panthera Costa Rica Jaguar Program director and Mesoamerica coordinator. “These wildlife guardians risk life, limb and the liberty of time with their families to not only conserve natural areas, but the water, food and economic opportunities from eco-tourism that benefit so many local communities. If we are to keep these areas from becoming empty ‘paper parks,’ the international community and Central American governments must work together to protect our park rangers in return.”

The survey has resulted in a number of recommendations for governments to improve working conditions for rangers, including providing proper supplies, equipment and infrastructure; offering permanent positions; hiring more rangers to provide safety in numbers; and ensuring that appropriate security protocols are in place.

“Central America’s rangers risk their lives every day to protect nature,” said Jeremy Radachowsky, Mesoamerica and Caribbean program director for the Wildlife Conservation Society. “They work in the midst of some of society’s most complex issues including drug, weapons, timber, and wildlife trafficking, corruption, poverty and violence. These leaders and heroes deserve the institutional backing and the physical and legal protections to do their work for humanity.”

This survey is part of a broader global initiative to improve working conditions for rangers, an initiative that includes WWF, Game Rangers Association of Africa, Ranger Federation of Asia and the IUCN World Commission on Protected Areas. The findings of this survey and similar studies of rangers across Asia and Africa will be presented at the World Ranger Congress in Nepal in 2019, with input from ranger federations around the world. Ultimately these results will help inform recommendations to professionalize the field and improve ranger welfare and working conditions.

“After 40 years in conservation, I have to say the park rangers are the best public officials in our governments. They work far from their families, threatened by poachers, wildlife and natural disasters, and with a very low salary and poor equipment. Yet they are passionate, committed and love nature. They are our heroes of nature.

Governments in Central America have invested heavily on professionalizing their police forces in the last two decades, but have not included park rangers on these efforts. Common police, tax and frontier police, municipal forces, have been trained and equipped. Unfortunately governments in the region don’t see rangers as a specialized force for nature conservation. Unless we do the same with rangers and recognize their police duties, we will never achieve our conservation targets. ”

Panthera, founded in 2006, is devoted exclusively to preserving wild cats and their critical role in the world’s ecosystems. Panthera’s team of leading biologists, law enforcement experts, and wild cat advocates develop innovative strategies based on the best available science to protect cheetahs, jaguars, leopards, lions, pumas, snow leopards, and tigers and their vast landscapes. In 36 countries around the world, Panthera works with a wide variety of stakeholders to reduce or eliminate the most pressing threats to wild cats—securing their future, and ours. Visit panthera.org