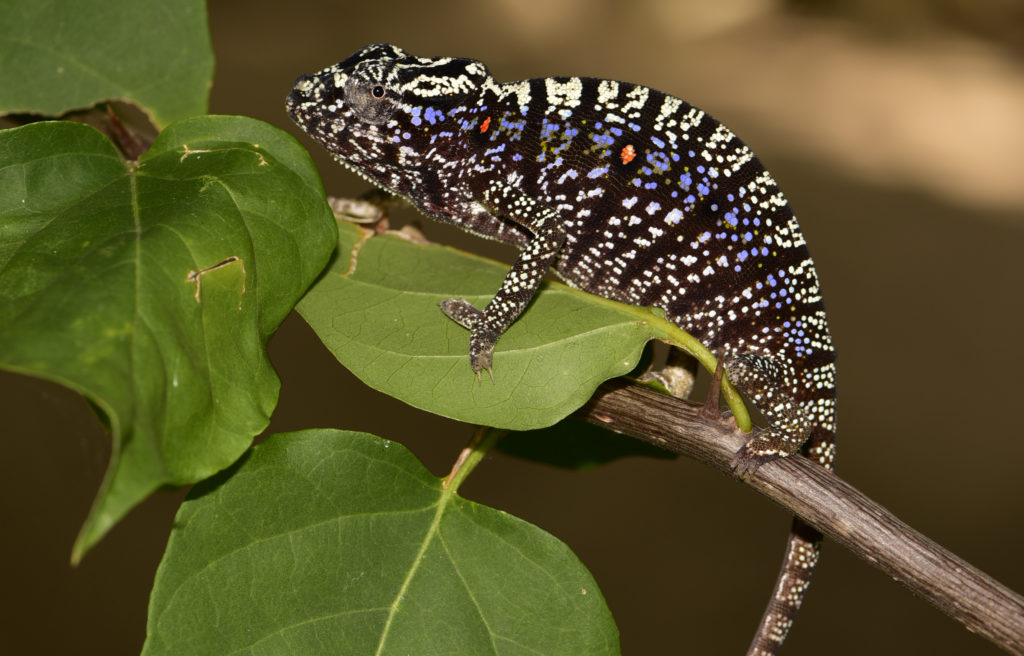 An expedition team’s two-week trip to northwestern Madagascar in search of the lost Voeltzkow’s chameleon (Furcifer voeltzkowi) not only resulted in the successful rediscovery of the species, but the discovery that the females are very colorful. The Voeltzkow’s chameleon is the sixth of Global Wildlife Conservation’s top 25 “most wanted” lost species to be rediscovered, and its rediscovery will help unlock the many secrets surrounding the cryptic species first described in 1893 and last seen in 1913 in Madagascar. Although the expedition took place in April of 2018, the rediscovery was announced today, Oct. 30, in the scientific journal Salamandra.

“I thought we might have a good chance of rediscovering Voeltzkow’s chameleon, but I was surprised that it took so long and that it was so difficult,” said Frank Glaw, head of the Department of Vertebrates at the Zoologische Staatssammlung München, who led the expedition, which also included chameleon asset management ltd, the Swiss sponsor, represented by Carlos Zanotelli, and the University of Antananarivo in Madagascar. “Our efforts were entirely unsuccessful during most of the trip to find it where we thought it would most likely be. That was really frustrating, but the rediscovery during the last few days of the trip immediately changed everything and brought us an incredibly happy ending.”

The members of the team found numerous individual chameleons on the first trip, including three males and about 15 females. According to Glaw, they found what seemed to be a healthy population for a short-lived species. Expedition member Angeluc Razafimanantsoa, a professional guide from Montagne d’Ambre in northern Madagascar who joined in 2018, was the first to spot the chameleon, which the team identified immediately as their query.

The females of the species especially stand out, Glaw said, with their brilliant colors—purple, orange, red, green, black and white—with striking patterns. The females can change color depending on their “mood,” and the number of red dots on their flanks varies by individual.

The biggest challenge for the expedition team was the result of a quirk in the expected natural history of the species. The closest relative to the Voeltzkow’s chameleon is probably Labord’s chameleon (Furcifer labordi), a species that lives for a mere four or five months. It spends most of its time as an egg, then hatches in November, grows rapidly to reach sexual maturity within two months, lays eggs in January and February, and then dies in February or March. The biologists expected Voeltzkow’s chameleon to have a similar life history, with a lifespan just a few weeks longer, leaving the team a very short and precise period of time to find live adults—an especially challenging task during the rainy season, when roads to its habitat are not accessible.

“The Voeltzkow’s chameleon adds color and beauty to the planet, and reminds us that even when all seems lost, a great adventure can rekindle hope even for species we haven’t seen since Woodrow Wilson was president,” said Don Church, GWC president and a Search for Lost Species program lead. “Now we have so much to learn about this extraordinary reptile, including how we can best save it from extinction.”

In their study published today, Glaw and his team have provided the first data on the natural history of the species and the morphological and color differences between this species and Labord’s chameleon, in addition to analyzing how different the two are genetically. Their results unambiguously confirm that the Voeltzkow’s chameleon is actually a species separate from Labord's chameleon (Furcifer labordi).

Madagascar is home to nearly half of the world’s chameleon species, where bush fires, cattle grazing and deforestation threaten the survival of the reptiles. According to Glaw, parts of the potential habitats of the Voeltzkow’s chameleon are already protected in nature reserves and additional conservation action will be based on future research about the distribution of the species.

“The Voeltzkow’s chameleon is a powerful flagship species for conservation in the region,” said Zanotelli, who was also on the 2018 expedition. “It is imperative that we protect nature and treat natural habitats as if we would like to live there. Only in this way can we ensure the future of the incredible species, like the Voeltzkow’s chameleon, we share this planet with.”

The Search for Lost Species is the largest-ever quest to find and conserve wildlife lost to science for at least a decade. GWC has confirmed the rediscovery of five other species from its 25 most wanted lost species list: Jackson’s climbing salamander in Guatemala, both the Wallace’s giant bee and the velvet pitcher plant in Indonesia, the silver-backed chevrotain in Vietnam, and the Somali sengi in Djibouti earlier this year.

*Reporters and others who distribute this news can use the images in their news coverage of the rediscovery, but should give correct credit for the pictures.

chameleon asset management ltd is a Swiss/Basel based wealth manager with key competences in convertible bonds. Securities that can be exchanged/converted into their underlying stock or being paid back at nominal on the option of the investor. Our logo brand stands too for optimal adaptation for general, discretionary, wealth caring needs of UHNWI´s and Family Offices. Learn more at www.chameleon-asset.ch