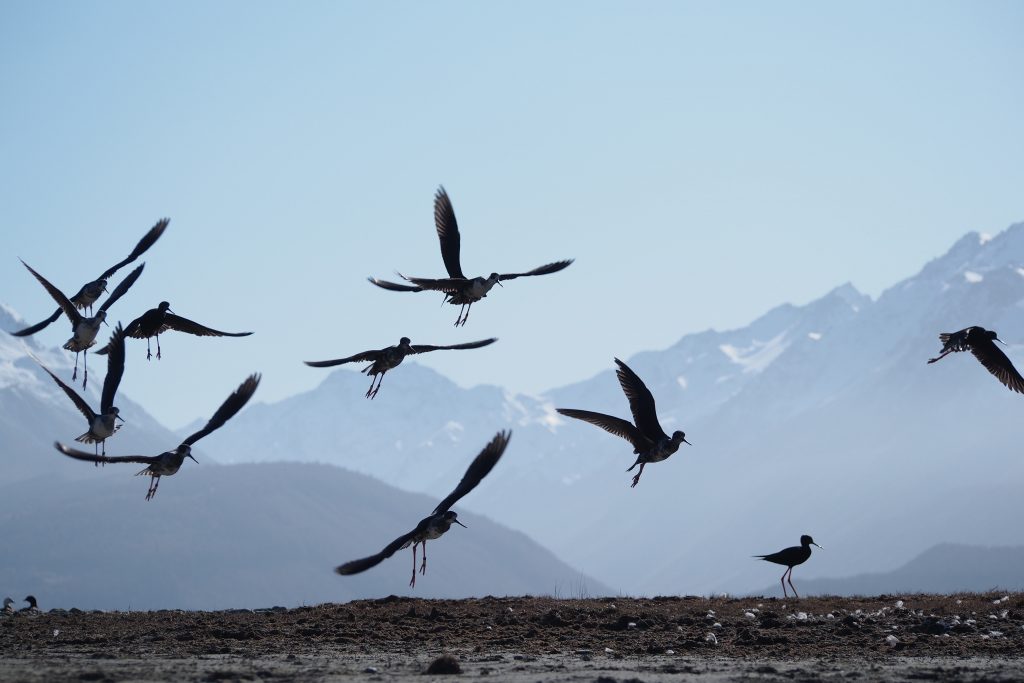 Global Wildlife Conservation today injected some additional hope into the once-uncertain future of the world’s rarest wading bird, a critically endangered species found only on the South Island of New Zealand. In recent years, the kakī, or black stilt, has begun rebounding from the brink of extinction thanks to the New Zealand Department of Conservation’s captive breeding and reintroduction program. Through a significant contribution to the program, GWC is helping ensure that kakī can one day thrive on their own in the wild.

“New Zealand is a true conservation jewel, but there are ongoing declines of native species and habitats,” said GWC board chairman Brian Sheth, who is visiting with the Department of Conservation this week and whose philanthropic organization, Sangreal Foundation, provided funds for the project. “We are excited to partner with the forward-thinking and collaborative Department of Conservation, who innovatively partner with non-profits, Māori communities, businesses, and other stakeholders to preserve the country’s unique natural and cultural heritage. The critical conservation program in the Mackenzie Basin, including the recovery of the kakī, will be a model for the country.”

Kakī were once widespread across a unique system of braided rivers in New Zealand. But introduced predators, including stoats, ferrets, possums and rats, decimated the population, leaving a mere 31 adults and four breeding pairs in the wild by 1991. Today the Department of Conservation’s Kakī Recovery Program has more than tripled the population to 106 wild adult birds.

The program’s success has relied, in part, on a six-bay aviary that provides suitable captive habitat and space for groups of young birds to be raised together from hatching. In 2015, an unusually large snowstorm destroyed one of the program’s aviaries and damaged another. The department will use GWC’s funding specifically for the breeding program, including the construction of a new 10-bay aviary that will boost the program’s rearing capacity by an extra 60 birds each year.

“At GWC, we are proud to support the underdog species that need this kind of life support, and to partner with groups that are heroically restoring species that come so close to vanishing,” said Wes Sechrest, GWC chief scientist and CEO. “With Sangreal Foundation’s generous support and the Department of Conservation’s ongoing efforts, we look forward to the day when kakī chicks are once again naturally fledging in the wild throughout their historical range—the sign of a truly sustainable population.”

Kakī are found only in New Zealand, where the Māori regard the bird as a taonga species, or a living treasure. The adult birds have distinct black plumage and long pink-red legs. In addition to predation, they face habitat loss and disturbance of their habitat on the South Island’s Mackenzie Basin. The kakī are a key species for the future recovery of the native fauna and flora of the unique Basin ecosystem.

“This will be a cornerstone project for long-term landscape-scale species protection in the region,” said New Zealand Conservation Department’s Director-General Lou Sanson. “It’s appropriate the funding for the new aviary is coming from an organization that strives to conserve the diversity of life on Earth, including some of the most rare and imperiled species. Like the Department of Conservation, GWC wants the kakī to completely recover from the edge of extinction.”