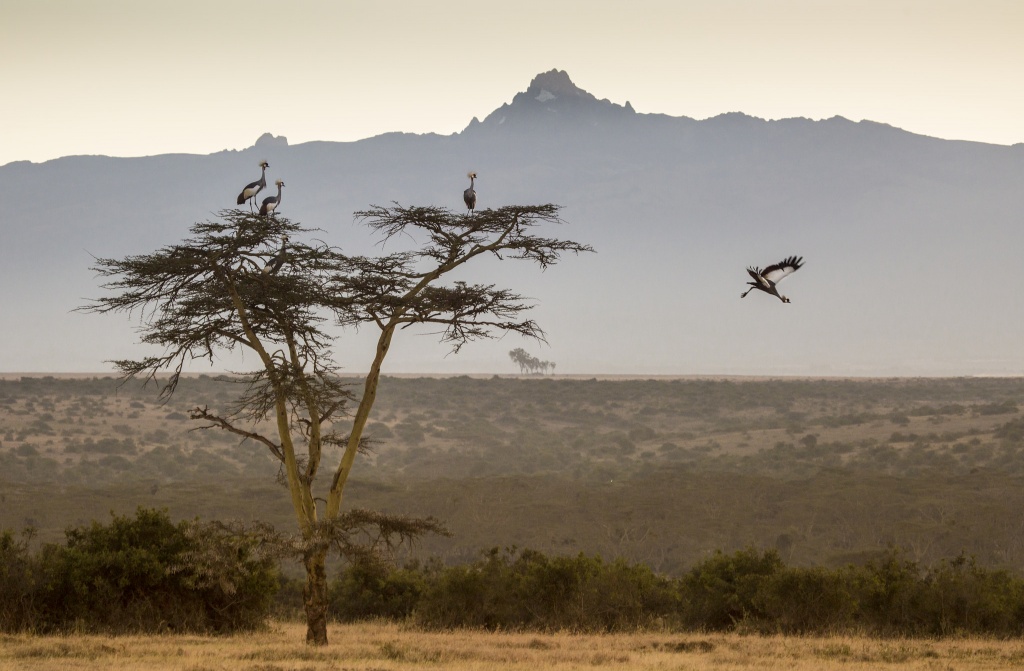 Crowned cranes gather on a tree at sunrise in front of Mount Kenya, a Key Biodiversity Area. (Photo by Robin Moore)

Hawaii–Today, 11 of the world’s leading conservation organizations, including Global Wildlife Conservation, announced an ambitious new partnership to identify, map, monitor and conserve Key Biodiversity Areas (KBA)—places that include vital habitats for threatened species—with more than $15 million committed over the next five years.

The announcement was made at the IUCN World Conservation Congress currently taking place in Hawaii.

Through the KBA Partnership, resources and expertise will be mobilized to further identify and map Key Biodiversity Areas worldwide. Monitoring of these sites will enable detection of potential threats and identification of appropriate conservation actions. The Partnership will also advise national governments in expanding their protected areas network, and will work with private companies to ensure they minimize and mitigate their impact on nature.

“Humankind is at a critical point in our efforts to protect the diversity of life on our planet, both for its own sake and for the long-term health and well-being of humans,” said Wes Sechrest, chief scientist and CEO of GWC. “The KBA initiative will, for the first time ever, quantitatively measure and map where the most important areas are for maintaining biodiversity on Earth. These are the kinds of ambitious efforts that preserve our vital connections to wildlife and wild places, including those connections that we have yet to fully understand.”

The International Union for Conservation of Nature (IUCN) has engaged with hundreds of experts and decision-makers to develop a Global Standard for the Identification of Key Biodiversity Areas. The Standard will also be launched during the World Conservation Congress, on Monday, Sept. 5.

“Our planet is at the crossroads and we need to take urgent action if we want to secure its ability to support us,” says Inger Andersen, director general of IUCN. “Information about where and why a site is considered key for the survival of threatened species underpins all sustainable development and will be critical for achieving Sustainable Development Goals.”

In particular, knowledge about Key Biodiversity Areas will contribute to the achievement of Sustainable Development Goal 14—on the conservation and sustainable use the oceans— and Goal 15—to manage forests, combat desertification, and halt land degradation

The KBA Partnership builds on the partners’ established track record in site identification, monitoring and conservation. Over the past four decades, BirdLife International has identified more than 13,000 Important Bird and Biodiversity Areas (IBAs) on land and at sea in every region of the world through its 120 national partners and others, while the Critical Ecosystem Partnership Fund has supported the identification of 6,000 Key Biodiversity Areas within global biodiversity hotspots.

To date, more than 18,000 global and regional Key Biodiversity Areas have been identified and mapped. These include Ujung Kulon National Park in Indonesia—where the last known population of the Critically Endangered Javan rhinoceros (Rhinoceros sondaicus) lives—and the Molokai Island marine area in Hawaii—home to the Critically Endangered coral Porites pukoensis, known only to occur in the shallow waters of this site.

The new Partnership will unite these efforts under a single KBA umbrella. It will expand the KBA network to cover other species and ecosystems using the global KBA standard. These data will guide decision-makers on areas that require safeguarding and will help a range of end users to define their conservation priorities, achieve their international commitments, and comply with their environmental policies.

Photo: Crowned cranes gather on a tree at sunrise in front of Mount Kenya, a Key Biodiversity Area. (Photo by Robin Moore)

For more information, and to view an interactive map of more than 18,000 Key Biodiversity Areas, visit www.keybiodiversityareas.org.