Together at Last: Frogs Romeo and Juliet Get their Long-awaited First Date 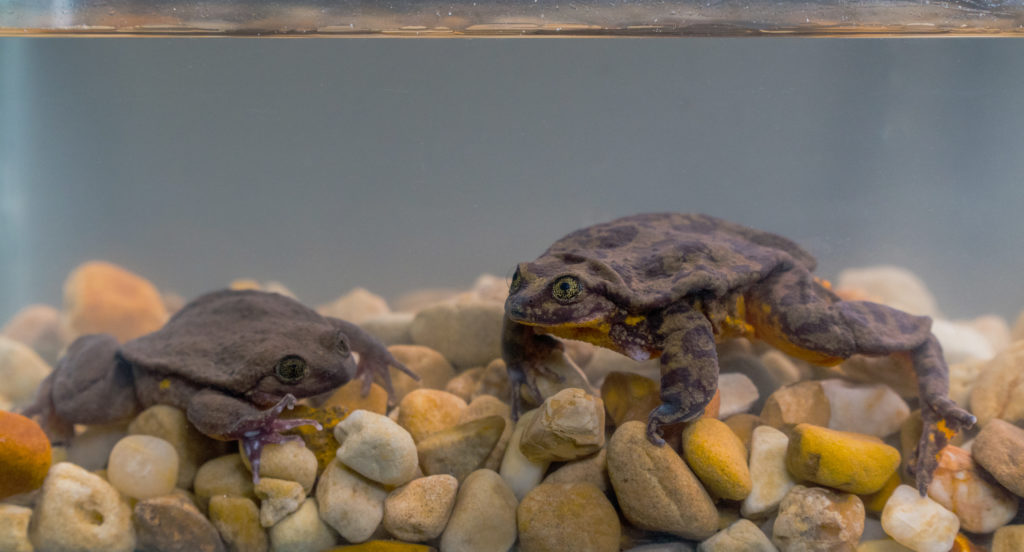 The first date between Romeo, once the last-known Sehuencas water frog, and Juliet, whose discovery in the wild made headlines worldwide in January, went so well that the two have been living together in Romeo’s aquarium since. After both frogs were cleared of a deadly infectious disease called chytridiomycosis, which has caused amphibian declines throughout the Neotropics, Global Wildlife Conservation and the Museo de Historia Natural Alcide d’Orbigny in Bolivia put the two together March 1 in an aquarium new to them both. After some observation, museum staff moved the pair to Romeo’s aquarium.

“When the fate of an entire species is on the line, there’s really no time for taking it slow before committing to moving in together,” said Teresa Camacho Badani, the museum’s chief of herpetology. “Romeo has been really sweet to Juliet, following her around the aquarium and sacrificing his worm meals for her. After he’s been alone for so long, it’s wonderful to see him with a mate finally.”

Shortly after Romeo and Juliet were moved into Romeo’s aquarium, Romeo called for the first time since the end of 2017—a sign that he is ready and eager to breed. [Download Romeo’s call, which starts at :20] But he hasn’t quite yet figured out the exact right position for amplexus—the mating position for frogs where the male grasps the female and holds on until he can fertilize her eggs as she lays them. Some species of frogs can go into amplexus for weeks or even months. The males sometimes lose weight because they might forgo food during that time.

So far Romeo has only successfully gotten into the right position for amplexus a few times and the longest was for about 15 minutes the first day the pair was put together. Since meeting Juliet, he’s also exhibited what water frogs experts are saying is a behavior they have never before observed in this group of species—rapidly moving the toes on his back feet when he’s near Juliet, likely a species-specific performance meant to impress the female. [Download video of Romeo’s “twinkle toes”]

“We don’t know much about the reproductive behavior of this species, so we’re not sure how long amplexus lasts, how long it takes tadpoles to hatch, or how many eggs Juliet might lay,” said Chris Jordan, Global Wildlife Conservation’s Central America and Tropical Andes coordinator. “For now we’re keeping them together, and observing them, which as simple as it sounds, is already revealing previously unknown behaviors and answering natural history questions about this relatively unknown species. It has served as a reminder of how little we know about a lot of the species with which we share this planet.”

[Read a Q&A by Sophia Barrón Lavayen, the head of conservation breeding for the K’ayra Center, about caring for Romeo and Juliet, and their first date]

In addition to Juliet, four other Sehuencas water frogs were brought in from the wild: two males and two additional females (one of the frogs was mis-sexed originally—it can be difficult to sex them, especially with younger animals). These were the first Sehuencas water frogs that biologists had seen in the wild in a decade, though over the years (including in 2018) scientists had searched for the species with no success. The other frogs have just started to show signs of being prepared to breed, and remain together in a single aquarium. In addition to Romeo and Juliet, the animals will be the founders of a conservation breeding program at the museum’s K’ayra Center for Research and Conservation of Threatened Amphibians of Bolivia as part of a broader initiative to bring this species back from the brink of extinction.

Fans of the new celebrity couple can support their happy future and the establishment of the conservation breeding center by making a donation toward any of the items on Romeo and Juliet’s “happy future” registry, including a rescue pod for a new biosecure home for the species, a tadpole nursery and a frog college fund to support habitat conservation efforts so that offspring may someday be returned to the wild. In addition, the museum and GWC are launching an opportunity for fans to tune in to GWC’s Facebook page at 11 a.m. ET every Wednesday, starting April 3, to see a live feeding of Romeo and Juliet and to ask their questions about the pair.

Conservation breeding and reintroduction programs have worked for other species in this precarious position, including the Mallorcan midwife toad in Spain—at least 10 populations of this species have been successfully reintroduced to the wild. In Tanzania, the Kihansi spray toad—classified as extinct in the wild by the IUCN Red List of Threatened Species—has been successfully bred at zoos in the United States and is part of soft releases and a program for full reintroduction.

Bolivia has the 10th highest level of amphibian diversity in the world, but 22 percent of those species face some degree of extinction threat. This includes 10 of the 14 water frogs—including the Sehuencas water frog—in the country. Amphibians have declined precipitously as the result of chytridiomycosis, habitat destruction, the introduction of exotic species (such as trout that eat frog eggs), pollution and climate change.

Romeo became an international celebrity on Valentine’s Day in 2018 with a dating profile on Match, the world’s largest dating company. Now he is a powerful flagship for conservation in Bolivia.

We care about life by supporting wildlife conservation projects, working along with local communities and communicating our scientific knowledge. Thus, to raise awareness of wildlife importance for human development. Learn more at http://www.museodorbigny.org