Population of Up to 700 Individuals Is Rapidly Rewilding a Landscape That Was, Until Recently, Devoid of Larger Mammals 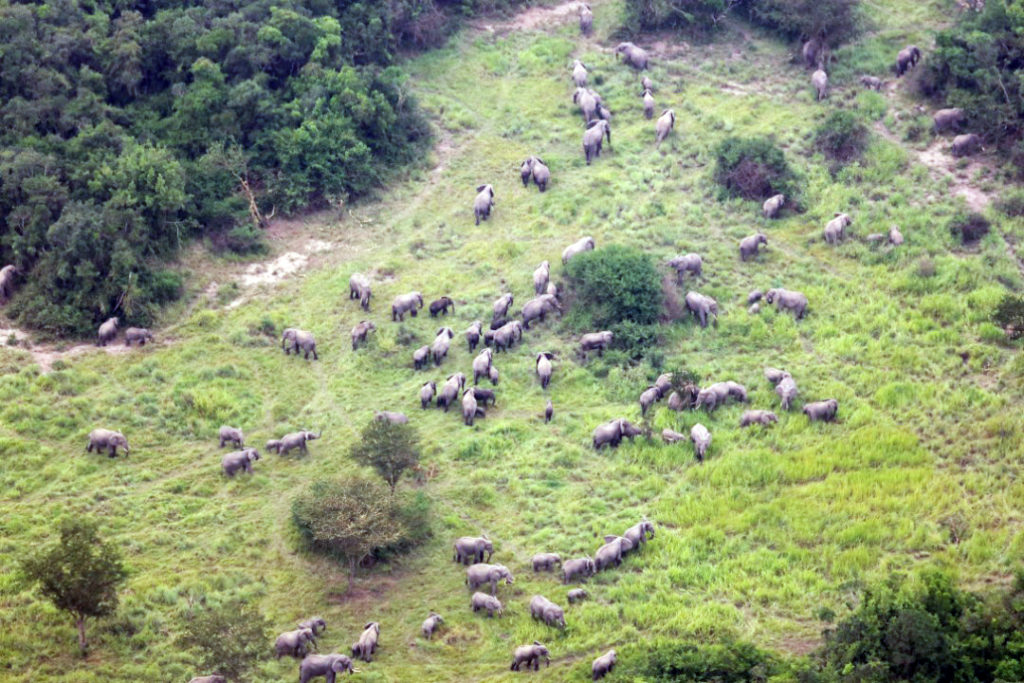 For the last five months, Virunga National Park in the Democratic Republic of the Congo has been undergoing an unexpectedly rapid transformation thanks to an aggregated herd of about 580 African elephants that have crossed into the park from bordering Uganda’s Queen Elizabeth National Park—and stuck around.

Together with the 120 or so elephants already in Virunga, this current group of elephants makes up at least 700 individuals. After decades of poaching across the continent, groups of this size are increasingly rare. The move to Virunga is not only the result of the park’s recent and critical conservation efforts in its central savanna, but as the elephants tear through the trees and pummel invasive bushes, they are also transforming the landscape back to a true grassland savanna, allowing the return of grazers and other wildlife species that have been absent from the park for the last two decades: buffalo, Ugandan kob, warthogs, topi, and even a pair of lions.

“For years I haven’t seen any animals when I flew over this area—just rebels,” said Anthony Caere, an anti-poaching pilot at Virunga National Park. “Now not only are we seeing the elephants, which is an unbelievable sight from above, but we’re noticing the impact of such a big herd on the park. They’re restoring everything back to what it was 50 years ago and doing so much faster than we could have imagined. If the elephants continue to stay here in these numbers, this place will look totally different in just a few years.”

In recent decades, smaller numbers of elephants would move naturally back and forth between Queen Elizabeth National Park and Virunga, which was the first national park to be established in Africa and is home to more species of birds, reptiles and mammals than any other protected area on the continent. In recent years, however, the presence of armed militia who hunt the animals and illegal agriculture in Virunga scared away most of the savanna elephants. To address these threats, Virunga rangers and staff have focused on securing the area from militia presence and working on development initiatives with the local community.

“This is a really incredible example of rewilding our planet by giving nature a bit of help and then letting the elephants, in this case, take care of the rest,” said Wes Sechrest, Global Wildlife Conservation chief scientist and CEO. “Providing the conditions for nature to recover is critical to the future of our planet as we tackle climate change, wildlife extinction and pandemics. Virunga is demonstrating that it is possible for us to not only protect wildlife and wildlands, but to restore them in ways that will help ensure a healthier planet.”

The joyous return of the elephants at these numbers comes during a particularly tough year for Virunga, which has been closed to tourism since March and, as a result, has struggled to sustain its critical functions. In addition, in April, 12 Virunga rangers, a driver and four members of the local community lost their lives in a ferociously violent attack by a militia group, the deadliest known attack on park rangers on the African continent in recent history. All of this while rangers and staff have been managing the impacts of both Ebola and COVID-19 on the park and local communities.

The park, with support from Leonardo DiCaprio, Global Wildlife Conservation, Emerson Collective, and the European Commission, launched a Virunga Fund earlier this year to provide urgent support to the park to deliver critical disease prevention efforts, law enforcement, and the protection of its wildlife, in addition to supporting the families of rangers who have fallen in the line of duty. Donations can be made at /virunga-fund/.

“The return of large elephant herds to Virunga is the outcome of decades of extraordinary efforts on the part of Congo’s park rangers,” said Emmanuel De Merode, director of Virunga National Park. “Considerable work remains to ensure that the park makes a significant contribution to the wellbeing of the local community.”