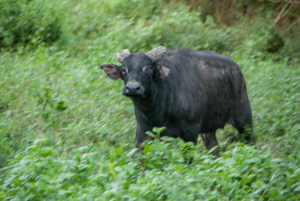 The Philippines’ proposed national land animal, a dwarf buffalo called tamaraw, could again roam wild across the country’s Mindoro Island by 2050, according to an ambitious conservation plan being developed by a team of local, national and international conservationists, policymakers and indigenous peoples. The National Tamaraw Conservation Action Plan, which is spurring tremendous enthusiasm for conservation in the Philippines, will involve increasing the populations of tamaraw currently found in only three known locations and reintroducing tamaraw to two other sites where they were once found.

“A future with multiple populations of tamaraw across Mindoro will mean this iconic wild cattle species has the greatest chance of long-term survival,” said James Burton, chair of the International Union for Conservation of Nature Species Survival Commission Asian Wild Cattle Specialist Group and associate conservation scientist for Global Wildlife Conservation. “The ambitious recovery program will be a model for the conservation of other species across the Philippines and, if all goes according to plans, could be one of the world’s greatest conservation success stories in the coming years.”

Tamaraw are the Philippines’ proposed national land animal and listed as a critically endangered species on the IUCN Red List of Threatened Species. They stand at about 4feet at the shoulders and charge when frightened. Only about 500 individuals are left on Mindoro Island—the only place the species lives—80 percent of which are found in Mounts Iglit-Baco Natural Park. The two other known populations on the island are small with only about 50 and 12 individuals—and without conservation measures would likely go extinct in the next few decades.

The newly developing plan for tamaraw conservation draws on recent tamaraw distribution and population data. The plan will address the primary threats to the species by ensuring zero poaching of the animals, working with ranchers to prevent the spread of disease from domestic cattle to the tamaraw, managing invasive species such as the plant shrub Chromolaena odorata, and collaborating with the indigenous communities to manage their land in a way that integrates their cultural and development needs with the recovery of the tamaraw.

The developing National Tamaraw Conservation Action Plan is the product of a Population and Habitat Viability Assessment (PHVA) workshop this month, 22 years after the last PHVA for tamaraw. Since then, the population of tamaraw has grown from 150 individuals to more than 400 in Mounts-Iglit Baco Natural Park—where conservation recommendations from the last PHVA have been implemented. Because the population here has grown but is restricted to a small area, the team will be able to relocate some of these animals to start new populations and supplement small populations.

“It is because of the success of the last PHVA that we are able to develop this ambitious recovery plan now,” said Ma. Teresita Pineda, Jr.-David, coordinator of the Tamaraw Conservation Program. “We were warned at that time of the possibilities that could happen to our tamaraw population and we took action to protect it. Conservation is a shared responsibility, so we must continue doing the best we can by empowering our local communities who are very much willing to take part in tamaraw conservation.”

Among the eight Mangyan tribes of Mindoro, three still share their living space with the tamaraw and will strongly influence the long-term fate of the species—and, in fact, all known tamaraw live in areas managed by indigenous people. This PHVA workshop included representatives from three indigenous communities, the Tau Buid, Buhid and Alangan. A protected area management plan for Mounts Iglit-Baco Natural Park includes helping the Tau Buid obtain official recognition of their ancestral domain, which are the right that the local communities have to live in and use resources from places that their people have historically lived in. Once they receive recognition of their ancestral domain, they will develop a management plan that aligns with the management plan for Mounts Iglit-Baco Natural Park, including tamaraw conservation measures.

Mindoro Island is the seventh largest island in the Philippine archipelago. In addition to the Tamaraw, 16 other wildlife species live on Mindoro Island and nowhere else in the world, including Oliver’s warty pig and the Mindoro imperial-pigeon. The mountainous island was once entirely forested, but its forests have been cleared for agriculture, cattle ranching and commercial logging, forcing tamaraw living in Mounts Iglit-Baco Natural Park to inhabit grassland areas of the island.

“The tamaraw is a natural heritage that is found only in the island of Mindoro,” said Josefina De Leon, division chief of the DENR’s Wildlife Resources Division. “It shares its domain with other island-endemic and indigenous species of wildlife. Conserving the tamaraw and its habitat throughout its known range in the island would mean the conservation of Mindoro biodiversity that sustains the ecological functions and services in the island.”

“Unlike the bald eagle, America’s national animal, very few people actually see a tamaraw because they’re only found on one island. And yet tamaraw are a tremendous source of national pride, especially on Mindoro, where everyone feels a sense of duty to save this animal. It is that enthusiasm, backed now by this audacious plan, that gives us hope for the future of the tamaraw.”

“I was especially glad to see several Mangyan Indigenous groups from various tribes and different locations in Mindoro, meeting together in the same room and discussing common challenges with a clear desire to contribute to the overall workshop and bringing very valuable input. It is crucial to help them build consistent solutions, in line with their cultural practices in order to cope with the multiple challenges they are facing today.”

“I am extremely hopeful for the future of the Tamaraw. We know from the successes that followed the 1996 PHVA workshop that the people of Mindoro are capable of great conservation achievements. I am confident that with sufficient support, the Tamaraw Conservation Program and its network of collaborators will be able to extend the successes seen at Mount Iglit-Baco to additional sites.”

“It is not just our moral responsibility to the Philippine nation and to the Filipino people to save the tamaraw, it is our responsibility to the whole world because you can’t find the tamaraw anywhere else in the world. It is only here. So we are conserving the natural patrimony not only of Occidental Mindoro, but the patrimony of the whole world.”

The Tamaraw Conservation Program (TCP) aims to save the tamaraw from extinction. This is achieved through regular patrols by TCP Rangers in tamaraw habitats, and by awareness raising. TCP is a program of the Department of Environment and Natural Resources (DENR) of the Philippines. Find out more at www.facebook.com/tamarawdenr.

The AWCSG is made up of biologists, conservationists and zoo professionals committed to the conservation of Asia’s nine wild cattle species. We conduct and support research and conservation projects and raise awareness for these threatened species. We are one of over 120 Specialist Groups of the Species Survival Commission (SSC), developed by the International Union for Conservation of Nature (IUCN). Find out more at www.asianwildcattle.org.

IUCN is a membership Union composed of both government and civil society organisations. It harnesses the experience, resources and reach of its more than 1,300 Member organisations and the input of more than 13,000 experts. This year, IUCN celebrates its 70th anniversary. Since its establishment in 1948 in the French town of Fontainebleau, IUCN has become the global authority on the status of the natural world and the measures needed to safeguard it.

Department of Environment and Natural Resources