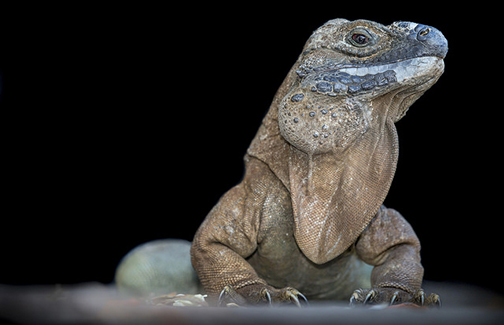 Once thought extinct, the Jamaican iguana could now be on the successful road to recovery, thanks this month to a decision by the Jamaican government to establish the Goat Islands in Jamaica’s Portland Bight Protected Area as a wildlife sanctuary for endemic and endangered species. The decision, which the Urban Development Corporation announced to Global Wildlife Conservation partner Jamaica Environment Trust (JET) Dec. 13, is a full reversal of earlier plans with Chinese interests to construct a $1.5 billion transshipment port at the site.

“We are thrilled to congratulate our partners at JET on this incredible and unprecedented victory,” said Robin Moore, GWC communications director. “There is tremendous power in bringing together a group of partners that can sound the alarm worldwide when these kinds of development projects threaten our critical wildlands and wildlife, and we commend JET for leading the way in these impressive efforts.”

In April of 2014—months after Goat Islands came under threat—and in September of 2015, Moore traveled to Jamaica to work with partners JET and International Iguana Foundation to bring global attention to the ecological havoc the proposed project would wreak on the Goat Islands and surrounding habitats. The result was the Save Goat Islands documentary, featuring the Jamaican iguana and highlighting how the transshipment port would likely condemn the endemic species to extinction. Together the partners also secured numerous international news stories and ran a social media campaign around SaveGoatIslands.org and #SaveGoatIslands (now #GoatIslandsSaved). (Read Moore’s personal account and photos from his trips to the Goat Islands)

In September of 2016, Jamaican Prime Minister Andrew Holness announced that the government was no longer considering Goat Islands for the transshipment port, and was instead committed to protecting the area. The government honored that commitment with the announcement this month that the wildlife sanctuary will be established.

Under the leadership of Diana McCaulay, JET’s outgoing Chief Executive Officer, JET worked tirelessly to bring transparency to the process of deciding where else the new transshipment port and logistics hub could be placed, and giving voice to those living within the Portland Bight Protected Area—those who would have been directly impacted by the development. JET also raised concerns over the long-term repercussions of the development to both the health and productivity of the ecosystem and local communities.

“The two Goat Islands are a very special part of our Jamaican heritage, as is the Jamaican iguana,” McCaulay said. “I look forward to visiting Jamaica’s newest Wildlife Sanctuary in the near future, and congratulate the government of Jamaica for this long-awaited decision.”

The protection of Goat Islands is of particular significance for the future of the Jamaican iguana, a charismatic species that once lived on Goat Islands, but was thought to have gone extinct in the 1940s as the result of the introduction of the Indian mongoose and human population growth. Since the rediscovery of a small population in 1990, the IUCN SSC Iguana Specialist Group has worked with local conservation partners to increase the population to the at least 200 individuals in the wild today. The next step to safeguard the species against extinction is the reintroduction of captive-reared juvenile iguanas on Goat Islands.

“The prehistoric-looking Jamaican iguana has captured the hearts of all who have worked to bring it back from the brink of extinction, driven by a shared vision of creating a predator-free sanctuary on Goat Islands,” Moore said. “This week we can all celebrate that the dream of one day visiting Jamaican iguanas on Goat Islands has not just been kept alive, but is one monumental step closer to reality.”