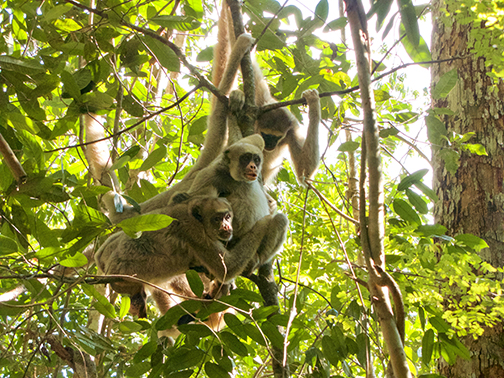 Minas Gerais, Brazil—In a vulnerable forest in southeastern Brazil, where the air was once thick with the guttural chatter of rambunctious brown howler monkeys, there now exists silence.

Yellow fever, a a mosquito-borne virus endemic to Africa and South America, has robbed the private, federally protected reserve called RPPN Feliciana Miguel Abdala (RPPN-FMA) of its brown howlers in an unprecedented wave of death that has swept through the region since late 2016, killing thousands of monkeys.

Karen Strier, University of Wisconsin-Madison professor of anthropology and Global Wildlife Conservation associate conservation scientist, has studied the monkeys of this forest since 1983. She revisited RPPN-FMA, her long-term study site near the city of Caratinga, in January of 2017.

“It was just silence, a sense of emptiness,” Strier said. “It was like the energy sucked out of the universe. It was really tense—scary—to go into the forest, knowing the howlers were gone but not knowing how bad things might also be for the muriquis. It was already devastating to see that the howlers were gone, but if we had also lost the muriquis to yellow fever, it would have been even worse.”

At the protected reserve, the endangered brown howlers are nearly gone. Long-term data gathered by Strier’s research team, co-led by Brazilian primatologist Sérgio Lucena Mendes, promises to offer insight into what can be done for the howler monkeys remaining in Brazil.

“I am very surprised at the speed with which the outbreak is advancing through the landscape and by how the virus can jump from one patch of forest to another, even if they are hundreds of meters apart,” said Mendes, professor of animal biology at the Universidade Federal de Espirito Santo. “It is also surprising that it is spreading across such a large geographic region.”

Strier’s primary interest, however, is in the northern muriqui monkeys that call the RPPN-FMA home. The ecological tragedy that has befallen the howlers also provides Strier and her team an opportunity: Muriquis, which seem less susceptible to yellow fever, have suddenly found themselves inhabiting a forest devoid of their main competitors. Strier and Medes want to know what happens next.

“No one really knows the consequences for the other primates or the forest when nearly the entire population of an abudnant species dies from disease in just a few months,” said Strier, who added that they have dealt with drought and fires in the forest, but never expected to lose so many animals to disease. “We are in a position to learn things we never knew before, with all the background information that we have collected. It’s like a controlled natural experiment, but one you would never plan to do.”

In particular, Strier and her team are eager to find out if the muriqui monkeys will travel less now that their main competitor—howler monkeys—are no longer around. Compared with brown howler monkeys, muriquis are larger and more agile, and they roam in large groups in search of food—primarily leaves and especially fruits. The howler monkeys tend to stay in smaller geographic areas, in smaller groups, eating much of the same food sources as the muriqui. A rowdy group of muriquis traveling through the forest will temporarily take over an area, causing the brown howlers to lay low, but often find the howlers have already eaten most of the food. The muriquis are then forced to move on.

With the howlers so sparse now, will the dynamics have changed? Will this lead to a change in the muriqui lifestyle? Will the muriquis’ social order change? Will they form smaller groups? Will their interactions change now that this ecological niche has been opened? How will the forest itself change with fewer seed dispersers living there? By comparing to data collected over more than 30 years, Strier and team aim to answer these questions about the secondary effects of the yellow fever outbreak on the muriqui monkeys.

The IUCN Red List of Threatened Species classify the Northern muriqui monkey as critically endangered. The muriquis are sometimes referred to as the “hippie” monkey because they are extremely peaceful and egalitarian, lacking the hierarchies common to most primate species. Neither males nor females routinely exhibit aggressive behavior, and females are independent and autonomous in muriqui society. In fact, it is the males that remain in their family groups while the females leave to join other groups just before puberty.

When Strier first started working in the Brazilian forest 34 years ago, there were just 50 muriquis. In September 2016, there were nearly 340 living in her study forest, which represents one-third of the species’ total population. When the yellow fever outbreak started, no one knew whether the muriquis were vulnerable to yellow fever. While some of the muriquis are currently unaccounted for—Strier and Mendes’ field team have located just 302 muriquis since January—they appear to be spared from the scourge of yellow fever. As of mid-March 2017, Brazilian health officials have confirmed more than 400 human cases of the disease, mostly in Minas Gerais, causing nearly 150 human deaths.

Read more about this news from the University of Wisconsin-Madison.