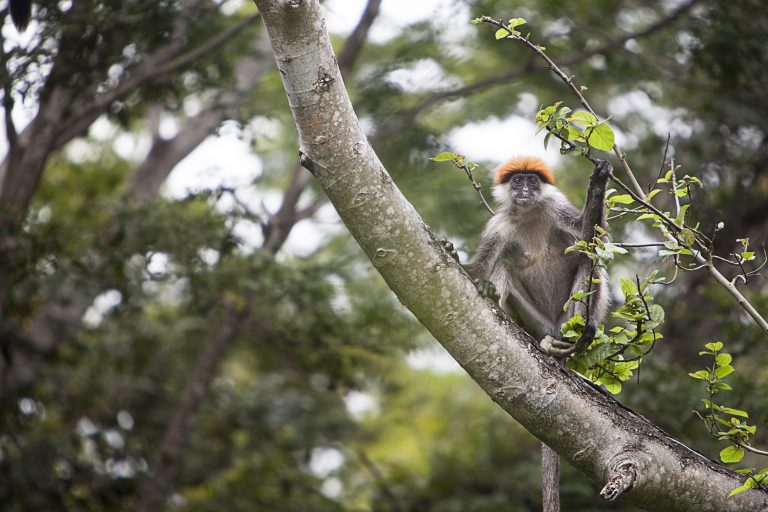 One of Africa’s most unique and wide-ranging groups of primates—red colobus monkeys—includes a remarkably diverse bunch of species and subspecies that share one unfortunate trait: nearly all of them are facing extinction, making them Africa’s most threatened group of primates.

Today, August 23, Global Wildlife Conservation joins the African Primatological Society and the IUCN Species Survival Commission Primate Specialist Group in the launch of an ambitious new action plan that will mobilize conservationists across Africa in a unified effort to save not just one species of red colobus monkey, but to prevent the continent-wide extinction of all 19 species and subspecies.

Of the 19 species and subspecies of red colobus, more than half are considered endangered or critically endangered by the IUCN Red List of Threatened Species. The primary threats to red colobus monkeys are hunting and habitat loss and alteration resulting from development and agricultural expansion. Three species, Miss Waldron’s red colobus, Lang’s red colobus and the Semliki red colobus, are feared possibly extinct and are among GWC’s Search for Lost Species program’s “most wanted” lost primates.

“If Miss Waldron’s red colobus is already extinct, it would be the first primate lost in more than a century—and several others are on the verge,” said Russ Mittermeier, Chief Conservation Officer for GWC and chair of the IUCN Species Survival Commission Primate Specialist Group. “This important and widespread group of monkeys, some of them strikingly beautiful, are good indicators what is happening to primates across Africa, and indeed to Africa’s biodiversity as a whole.”

The Red Colobus Conservation Action Plan (ReCAP), which launched today at the International Primatological Society Congress in Nairobi, will bring together experts on all 19 red colobus species and subspecies to leverage their collective expertise and influence. The plan will include identifying 30 or so priority sites across 20 countries to set up standardized monitoring tools and effective wildlife protection programs; empowering a new generation of local African conservation leadership around red colobus through training and mentoring programs; and developing cross-cutting, continent-wide initiatives to link and support site-based actions. 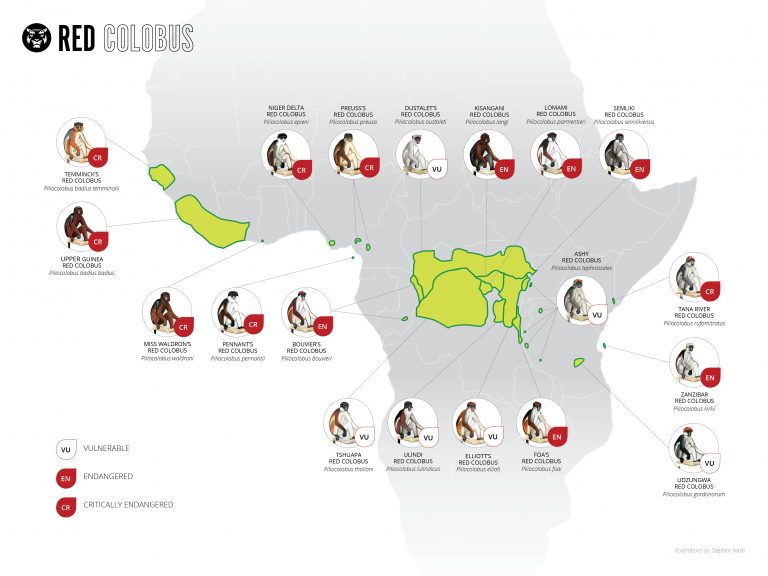 “Developing and fostering the implementation of the conservation action plans for threatened species is one of the primary strategies of the African Primatological Society,” said Inza Kone, president of the African Primatological Society. “There is no doubt that ReCAP is among those strategies that are most needed. It is the responsibility of all conservationists across Africa not to miss the priceless opportunity to learn from each other for informed, better-coordinated and impactful actions.”

ReCAP also aims to elevate the group of red colobus monkeys to a flagship for conservation. Red colobus monkeys were identified as a Cinderella species—a species that is currently overlooked, but aesthetically appealing, and that could help generate funds for the conservation of multiple species across a landscape—in a 2012 paper in scientific journal Conservation Letters. Because red colobus monkeys’ range overlaps with more than 75 percent of all primate species on mainland Africa, their protection would benefit countless other species.

“By pulling together as a conservation community, we can turn red colobus from an overlooked and ignored group of species into a group of species that is a flagship and icon for these forested areas,” said Barney Long, GWC’s senior director of species conservation. “We want to take this group of Cinderella species and, through this action plan, turn them into the belle of the ball so that everybody is looking at them, everyone is focused on them, and by saving them, we’re saving all of the other species around them.”

Red colobus monkeys are slow-moving, photogenic primates. They vary in coat color and pattern design (redheads with white beards, brunettes with smooth chins, blondes with black head bands), in facial patterns, behavior and vocalizations. They range from Senegal on the Atlantic coast to the island of Zanzibar in the Indian Ocean. Instead of thumbs, they have a small remnant bump. They can ferment leaves in their guts and digest plant matter, and are the primary prey for chimps. They are also large seed dispersers, helping to maintain the health of the forests in which they live.

“Red colobus face a tough situation and saving them is going to take the support of a global community not only for the species, but for the conservationists on the ground working to save them. With this ambitious plan, we are absolutely hopeful that this plan will save these animals from extinction. If we weren’t, we wouldn’t do it.”

“It is great to see an action plan for such an important group of primates, not just for African primate conservation, but for primate conservation worldwide. Red colobus monkeys are fascinating primates, and it is especially exciting to be able to launch the ReCAP at the International Primatolological Society, where we also welcome the African Primatological Society as an official affiliate. With the Red Colobus Action Plan as one of the African Primatological Society’s priority initiatives, we see the power of international collaboration in meeting some of the planet’s greatest conservation challenges.”

“Unlike great apes and other ‘charismatic’ species that attract global attention, red colobus monkeys, which can only be seen in the wild, are only known to a handful of researchers, conservationists, and local communities adjacent to their habitats. Concerted and coordinated conservation strategies outlined in the first ReCAP will provide more attention to the plight of the species and garner more support from a wider range of stakeholders to salvage remnant populations of this group of monkeys across Africa.”

The African Primatological Society is an educational and scientific organization that coordinates African primate research and conservation activities locally and internationally. Africa (including Madagascar) is home to more than 282 nonhuman primate taxa (including subspecies) about 70 percent of which are threatened in the wild. Protecting such a vast diversity of our closest relatives requires a continent-wide platform on which to network and exchange skills and experiences. APS provides such a platform.

The Primate Specialist Group is a network of scientists and conservationists who stand against the tide of extinction, which threatens humanity’s closest kin. Active throughout the tropical world, working in dozens of nations in Africa, Asia and Latin America, the PSG promotes research on the ecology and conservation of hundreds of primate species — monkeys, apes, lemurs and their many nocturnal relatives. Learn more at http://www.primate-sg.org/

The International Primatological Society is a not-for-profit organization whose purposes are to encourage all areas of scientific research involving non-human primates, to facilitate cooperation among scientists of all nationalities engaged in primate research, and to promote the conservation of all primate species. Learn more at  http://www.internationalprimatologicalsociety.org/