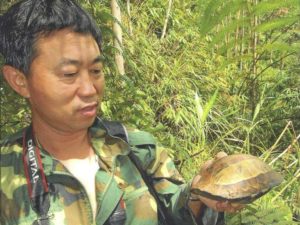 Turtles are among the most endangered groups of animals on the planet and are in the midst of what experts describe as a turtle extinction crisis. Nowhere has this crisis been more apparent than in China, the epicenter of the Asian turtle trade during the 1990s, which has since rapidly spread globally.

“Professor Shi has been a driving force for turtle conservation in China since the late 1990s and his efforts are effecting real change there,” said Anders Rhodin, co-chair of the Behler Award Committee. “He deserves the highest accolades and recognition for his accomplishments to date, and strengthened support for his efforts going forward.”

Shi, who is currently professor and vice-president of Hainan Normal University and vice-chairman of the Association for Science and Technology of Hainan Province, has an impressive resume with turtles always at the center of his efforts:

“Professor Shi’s work and collaborations with conservationists from outside China were instrumental to proper understanding of the status and conservation needs of China’s tortoises and freshwater turtles,” said Peter Paul van Dijk, turtle conservation director at Global Wildlife Conservation. “Without him, we’d be making guesses about priority species and China’s trade patterns, and underestimate the significance of domestic conservation achievements.”

There are 36 known species of turtles in China, accounting for about 10 percent of the world’s turtles. About 30 percent of these species are found nowhere else in the world, and biologists are still uncovering new species. But turtle products are commonly sold for food, medicine or pets in China—a demand that became unsustainable and has resulted in the import of turtles from anywhere in the world they are available. Shi has not only led the charge against these practices, but is also responsible for helping expand turtle research and protection.

In his acceptance speech for the 14th annual Behler Turtle Conservation Award in August, Shi said that “although China has been a cause of the turtle extinction crisis, it is also part of the solution” and urged the global conservation community to work together to save turtles from extinction in the wild.