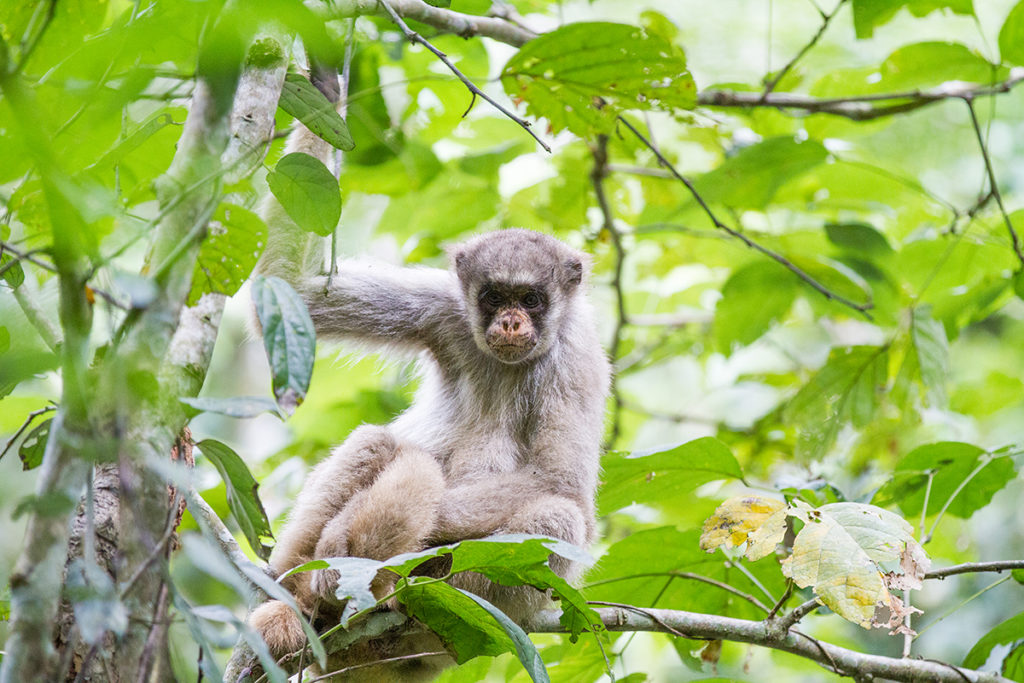 The world’s most peaceful primates are also among the most endangered, but a new study from a team of Brazilian and American researchers will help set the Northern and Southern muriqui monkeys on a promising path toward recovery. The study, which was published this month in PLOS ONE, reveals nine priority populations for each of the two species and identifies critical data monitoring needs across Brazil.

“We can’t reverse past assaults to the planet, but we can do everything we can to stop them and to give the animals and plants a chance to come back,” said Karen Strier, lead author of the paper, University of Wisconsin-Madison professor of anthropology and Global Wildlife Conservation associate conservation scientist. “For many species, including muriquis, doing so starts with setting up a monitoring system to understand how many individuals are left, where they are, how old they are, their sex ratio, their genetic diversity and a host of additional demographic information. We think this study may be one of the most comprehensive efforts to analyze the data monitoring needs for ensuring the survival of an endangered animal.”

The study analyzes all known populations of both the Northern and Southern muriqui monkeys—both endemic to the Atlantic Forest of Brazil—for population size, genetic uniqueness and geography, and determines the minimum monitoring needs to understand and predict changes in the populations. These efforts were a part of the Brazilian National Action Plan for the Conservation of Muriquis.

“If you want to preserve the muriquis, exactly what do you need to know?” said paper co-author Leandro Jerusalinsky, who leads the National Action Plan for the Conservation of Muriquis at Brazil’s National Center for Research and Conservation of Brazilian Primates, linked to the Chico Mendes Institute for Biodiversity Conservation. “This was the essential question, focusing on identifying population trends and conservation priorities.”

With fewer than 1,000 Northern muriqui monkeys and 1,300 Southern muriqui monkeys left in the wild, the IUCN Red List of Threatened Species has classified the species as critically endangered and endangered, respectively. The animals live in the remaining fragments of Brazil’s Atlantic Forest, considered one of the top five “hottest” hotspots for biodiversity. By the 1980s, less than 10 percent of southeastern Brazil’s Atlantic Forest remained intact.

Strier has already seen the tremendous conservation benefits of carefully monitoring a priority population of muriqui monkeys as part of her work with the Muriqui Project of Caratinga, a GWC partner. Since 1983, Strier has been working with Brazilian students and colleagues in one of the last remaining strongholds for Northern muriquis, a privately owned, federally protected reserve called RPPN Feliciano Miguel Adbala, near the Brazilian city of Caratinga. When Strier first started working in the Brazilian forest 34 years ago, there were just 50 Northern muriqui monkeys. By July 2017, there were nearly 300 living in her study forest, which represents almost one-third of the species’ total population.

“Karen Strier’s long-term project is a powerful testament to how conservationists can recover priority species by carefully studying a population’s demographics,” said Russell Mittermeier, GWC’s Chief Conservation Officer and renowned primatologist. “This important paper provides a roadmap for monitoring the health of key populations of these monkeys using cutting-edge technology, and establishing effective conservation measures accordingly. The findings in this study can also be applied to other imperiled primates, providing hope for humankind’s closest relatives.”

Muriqui monkeys are often referred to as the “hippie” monkey because they are extremely peaceful and egalitarian, lacking the hierarchies common to most primate species. Neither males nor females routinely exhibit aggressive behavior, and females are independent and autonomous in muriqui society. The monkeys often start their day with group hugs.