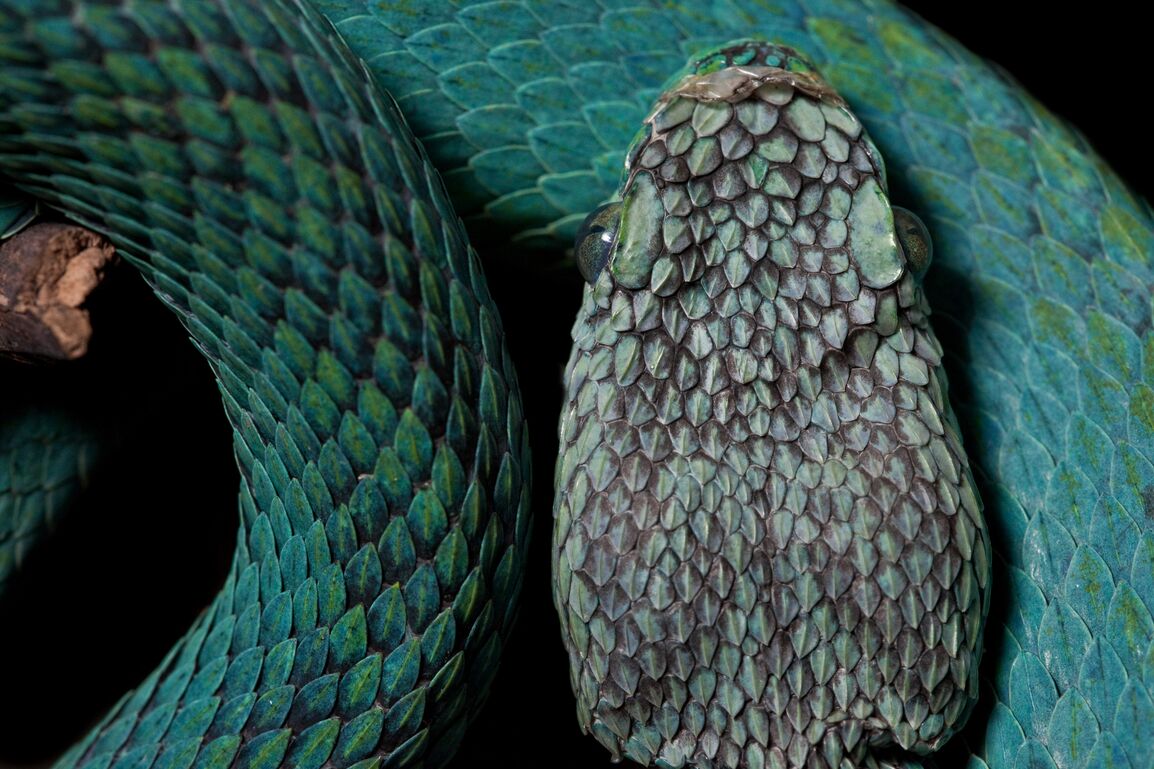 Conservationists are celebrating the establishment of the new 6,000-acre Sierra Caral Amphibian Reserve in Guatemala, which will protect some of the country’s most endangered wildlife. The reserve is home to a dozen globally threatened frogs and salamanders, five found nowhere else in the world, three species of threatened birds, and the recently discovered Merendon Palm-pitviper (Bothriechis thalassinus), an arboreal, blue-toned viper.

Tucked away in the eastern corner of Guatemala near the Caribbean Sea, and running along the Honduran border, the Sierra Caral is an isolated mountain range that is home to numerous rare and endangered animals and plants. Exploration of these mountains has yielded several new discoveries of beetles, salamanders, frogs, and snakes over the past two decades.

The site will offer protections for many birds including threatened species such as: the Highland Guan, Great Curassow and Keel-billed Motmot. Furthermore, the site is known as a haven for an abundance of migratory birds including the Canada Warbler, Kentucky Warbler, Wood Thrush, Painted Bunting, Worm-eating Warbler, and Louisiana Waterthrush.

The Sierra Caral forests are especially diverse due to the convergence of floras and faunas from North and South America, as well as many species unique to the region. Only a few Merendon Palm Pit Vipers have been found, most often in a palm native to the Sierra Caral. Guatemalan biologist Carlos Vasquez Almazan, one of the few individuals to find a Merendon Palm-pitviper in the wild, drew international scientific attention to the conservation importance of the Sierra Caral in recent years. He was recently awarded the prestigious Whitley Award for Conservation that recognizes outstanding nature conservationists around the world.

Speaking to the accomplishments of Carlos Vasquez Almazan in Guatemala, Sir David Attenborough noted, “Surveys of the area uncovered not only species new to science, but also led to the rediscovery of several previously thought to have become extinct.”

Brian Sheth, Chair of Global Wildlife Conservation stated, “The Sierra Caral reserve is important not only for the rare and endangered species that are unique to the region, but also as a corridor for animals between the continents.”

The remaining wild lands of the Sierra Caral are a critical component of the “Jaguar Corridor” that will permit large-ranging species such as Mountain Lions, migratory birds, and other wildlife to continue moving between the continents as they have done for millennia. Still largely unexplored by scientists, the almost 6,000 acres of core forest in this isolated site, and the species that depend on them, were almost lost.

“Each year 70,000 hectares of Guatemala’s forests disappear due to the expansion of agriculture and timber extraction, threatening not only wildlife but also the well-being of local people who rely on the clean water and other ecosystem services they provide.” said Sir David Attenborough.

Despite official pleas for forest protection by the local communities and a leading Guatemalan conservation organization, FUNDAECO, this area has been steadily deforested over the past decade. Rampant clear-cutting and shortsighted conversion of the mountain slopes into cattle pasture have followed large land acquisitions by a few individuals. As a result of these activities, the rivers that originate in these mountains and provide freshwater for thousands of people have been degraded for surrounding communities, and the risk of devastating landslides has increased. Local communities persuaded the Guatemalan Congress to declare the area a nationally protected area; however, budgetary restrictions prevented the government from purchasing the privately owned lands.

“This is a real triumph for the planet – conservationists across North and Central America banded together to save the last stand of this unique rainforest.” said Dr. Paul Salaman, CEO of World land Trust-US.

Marco Cerezo, CEO of FUNDAECO, said, “This major land purchase lifts the last hurdle for the Guatemalan government to declare the area a National Wildlife Sanctuary, something that local communities and conservationists have been desperately awaiting since 2000.

“We were very impressed with FUNDAECO’s track record of working with local communities and involving them in conservation, including creating good long-term jobs at their reserves”, commented Anne Lambert of the International Conservation Fund of Canada. “Sierra Caral is also stunningly beautiful, on top of its conservation significance”, she added.

The inauguration of the new Sierra Caral Amphibian Reserve occurred on May 2, 2012 and was presided over by Mr. Rafael Estrada, Governor of Izabal, and other dignitaries from local government. Over 200 local community members attended and participated in environmental education activities and festivities, highlighting a win for nature and people.

“The Sierra Caral reserve is a jewel in the biodiversity crown of Guatemala and of the world. This success story demonstrates how international alliances and local and national conservation leadership capacity can come together and protect unique species and habitats for future generations to enjoy.” said Dr. Claude Gascon, Co-Chair of the IUCN/SSC Amphibian Specialist Group.

FUNDAECO is a Guatemalan not-for-profit organization, dedicated to the conservation of the country´s biodiversity and to the sustainable development of its indigenous rural communities. In 2006 FUNDAECO was awarded with the BBVA Foundation´s “Biodiversity Conservation Award” by a Panel of Experts, for the “original and exemplary nature of its interventions” in favor of sustainable community development in the protected areas of the Biological Corridor of the Guatemala Caribbean.

Global Wildlife Conservation is a 501(c)(3) not-for-profit conservation organization whose mission is to use the best science to protect the world’s threatened wildlife and habitats. GWC improves life on Earth by advancing both academic and applied approaches to conservation research, action, and education. Along with its numerous strategic worldwide partners, GWC is pursuing a common goal: to save plants and animals from extinction and better understand and maintain the natural world and its biological diversity.

The World Land Trust-US is an international conservation organization that takes direct action to save rainforest and other wildlife habitats. WLT-US and its overseas project partners have been instrumental in the purchase and protection of over two million acres, now protected as permanent wildlife reserves. WLT-US is a 501(c)(3) not-for-profit organization that is consistently awarded the highest rating by the independent group, Charity Navigator.

The International Conservation Fund of Canada is a recent arrival on the conservation scene and was started to enable Canadians to support conservation in the tropics, where biological diversity and threats to it area greatest.

American Bird Conservancy (ABC) is a 501(c)(3) not-for-profit membership organization whose mission is to conserve native birds and their habitats throughout the Americas. ABC acts by safeguarding the rarest species, conserving and restoring habitats, and reducing threats, while building capacity in the bird conservation movement.