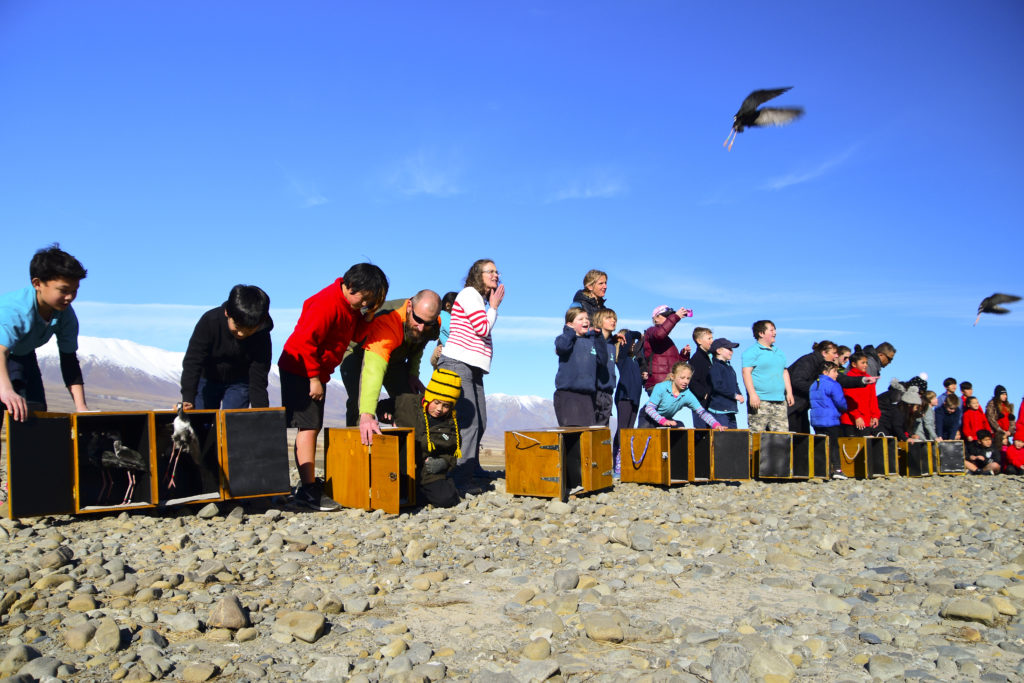 Kaki being released into the Godley Valley by classes from Twizel Area, Arowhenua and Tekapo schools.

The New Zealand Department of Conservation (DOC) released 104 juvenile kakī, or black stilts, into the wild in the South Island’s Mackenzie Basin Aug. 5 to 8 as part of its ongoing Kakī Recovery Programme. The kakī is the world’s rarest wading bird.

The birds were freed into the Godley Valley in three separate releases attended by classes from Twizel Area, Arowhenua and Tekapo schools.

Some of the birds were the first to be reared in a new kakī brooding facility near Twizel funded primarily by international conservation organisation Global Wildlife Conservation through the generous support of the Sheth Sangreal Foundation, along with DOC, Meridian Energy and Genesis Energy. The Isaac Conservation and Wildlife Trust raised 24 of the birds in its breeding facilities near Christchurch.

“This is a really exciting time for DOC’s kakī recovery team and all those who help us in this work. We’re seeing years of hard work to protect these critically endangered birds finally turning the tide for their recovery,” says DOC Senior Biodiversity Ranger, Dean Nelson.

In 2020, the adult kakī population increased by 30% from 2019 to a total of 169 adults. It was the population’s most significant increase since the recovery program began more than 40 years ago.

“It’s a collective effort with the population increase the result of both an intensive captive breeding program and an increase in predator control throughout the Mackenzie Basin where they live in the wild,” said Nelson. “It’s been a tough year for wild kakī due to frequent heavy flooding during the peak of the breeding season. Although this year has seen a reduction on previous years in the number of birds to be released, it’s still fantastic to have more than 100 young birds to release into the wild.”

Kakī, alongside other rare bird species from the region, breed in braided riverbeds leaving them and their eggs exposed to severe weather events and introduced mammalian predators—predominantly feral cats, stoats, weasels, ferrets and hedgehogs.

This is the first year all the young kakī are being released into the Godley Valley thanks to a robust and extensive predator control programme being run there by conservation project Te Manahuna Aoraki.

“Kakī are tough birds who live in extreme environments but they need a helping hand,” said Fiona McNab, Te Manahuna Aoraki project director. “Te Manahuna Aoraki has increased trapping networks to now protect 80% of the kakī range, we have high hopes kakī numbers will continue to increase with more predators taken out of the landscape. Protecting kakī and other braided river species is a team effort and we’re building on work by DOC and Project River Recovery. We’d also like to thank all the landowners in the area who have allowed us to extend trapping networks over their land.”