On International Golden Lion Tamarin Day, Conservationists Cautiously Optimistic for Future of Brazil’s Iconic Species In Midst of Steepest Population Decline in Half a Century 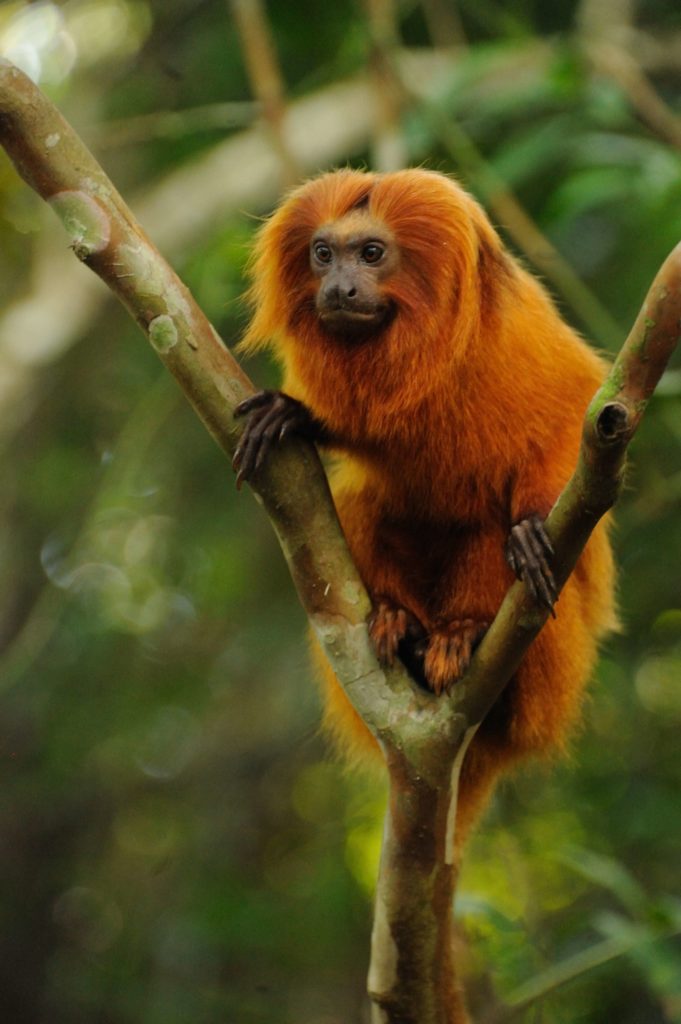 Among the world’s most celebrated wildlife comeback stories is that of Brazil’s golden lion tamarin, which numbered fewer than 200 individuals in the wild in the 1960s. Thanks to the international efforts of a large team of committed partners since the 1970s—including extensive genetic and reproductive research, a conservation breeding program, reintroductions and translocations—this little Atlantic Forest monkey rebounded to more than 3,700 in recent years.

As the fourth annual International Golden Lion Tamarin Day approaches on August 2, these ongoing efforts are on the line as golden lion tamarins face a new threat—a double whammy of diseases, one deadly to the tiny monkeys, the other hindering urgent efforts to immunize them. A wave of yellow fever that began in humans in 2016 unexpectedly started to kill the endangered tamarins in May of 2018, reducing the population by 32 percent to 2,500, according to a study published in the journal Scientific Reports.

Although conservationists have finally received approval to move forward with a safe vaccine for the monkeys after a lengthy and bureaucratic political process, COVID-19 has now made such field work less safe for people.

“We’ve always included in our strategic plan a response to an unexpected catastrophe, but the mortality rate of yellow fever was worse than what we had imagined by quite a bit,” said James Dietz, vice president of Save the Golden Lion Tamarin. “We didn’t see it coming, so it was a sucker punch. Now the screaming need is to keep the species safe from additional outbreaks of yellow fever by vaccinating as many tamarins as we can, as soon as we can.”

Save the Golden Lion Tamarin and Brazilian nonprofit Golden Lion Tamarin Association (Associação Mico-Leão-Dourado) hope to begin vaccinating the monkeys as soon as field teams could safely do so in the midst of the global pandemic. Doing so, however, will come with its own challenges. The arboreal monkeys are not easy to track down—they are small, weighing only 500 grams, and each small family lives in a block of forest comparable in size to nine city blocks. The field teams will have to find them, vaccinate them and then follow a strategic plan to relocate them to build up some of the populations that were hardest hit.

The historical threats to these golden-orange monkeys with lion-like manes included deforestation and forest fragmentation that isolated populations from one another for breeding, and the capture of the monkeys for the pet trade. In 1983, 43 zoos and breeding facilities stepped in to help save the tamarins by establishing a comprehensive breeding program, which resulted in the reintroduction of 146 zoo-born monkeys back into their native habitat in Brazil between 1984 and 2000. More than fifty percent of the wild golden lion tamarin population today has descended from those reintroduced individuals.

“Although yellow fever has caused such a surprising loss, the reality is that without the decades of successful conservation work that has gone into saving the golden lion tamarin, this species would either already have gone extinct or this event could have pushed it over the edge,” said Russ Mittermeier, chair of the IUCN Species Survival Commission Primate Specialist Group and chief conservation officer for Global Wildlife Conservation. Mittermeier has a long history helping to conserve this species dating back to 1971. “We’ve brought the golden lion tamarin back from the brink before, and we know what needs to be done to save it—but we can never lose our focus. Conservation of endangered species like the golden lion tamarin requires a permanent sustained effort.”

Deforestation and habitat fragmentation are among the biggest threats to the monkeys, but they have been compounded by yellow fever. Habitat fragmentation is primarily caused by cattle ranches, and by infrastructure that crosses the landscape, including pipelines for oil and gas, electricity, railways and roads. Some of the most critical populations have been hit hardest by the disease, making it even harder for them to find one another for breeding. The well-known research population in Poço das Antas Federal Biological Reserve decreased from 380 individuals to 32.

To reconnect isolated patches of forest, the Golden Lion Tamarin Association recently worked to build a forested overpass on interstate toll road BR-101. Without the bridge, the widening of the highway would have made it an impassable barrier to wildlife trying to cross to and from the Poço das Antas Federal Biological Reserve. The association negotiated with environmental agencies to include the wildlife bridge as a mandatory condition for issuing the environmental permit for the highway widening. After legal proceedings, the toll-road concessionaire was forced to build the structure. The bridge is the first of its kind in Brazil and conservationists see it as a model for wildlife protection measures in highway construction in the country.

In addition to administering vaccines, Save the Golden Lion Tamarin, the Golden Lion Tamarin Association and their partners aim to assess mortality rates since the 2019 survey, move monkeys from areas least affected by yellow fever to populations hardest hit by yellow fever, monitor for yellow fever in the future, and study whether the tamarins are developing any sort of acquired immunity to yellow fever. They will also continue to plant forest corridors to connect the habitat fragments and work with local landowners to assure permanent protection of the forest remaining on their farms. And once travel safely resumes, they hope to connect tourists to the animals and their conservation.

“Golden lion tamarins are not only cute, but they are very seductive,” said Luís Paulo Ferraz, Golden Lion Tamarin Association executive director. “People fall in love with them and seeing them is an unforgettable experience. A big part of our strategy will continue to be to introduce this iconic animal to locals and tourists—if they fall in love with them, it will help us save the species and their home.”

Partial support for the yellow fever vaccination program was provided by the Margot Marsh Biodiversity Foundation.

“Over half a century, the fight to save these remarkable monkeys has been at the forefront of the fight to save what are now the last remnants of Brazil’s Atlantic Forest, and the pioneering and innovative measures that have been taken have been, and continue to be, exemplary for saving species in tropical forests worldwide.”

"Lion tamarins, marmosets and tamarins, are a unique group of small primates that not only produce twins regularly but have a cooperative breeding system where males play an important role as caregivers. These beautiful primates also have a strong relationship with humans and in many communities they are of cultural significance. However, tamarins and marmosets are currently threatened with extinction because of ongoing destruction and fragmentation of their habitats and, in many cases, the pet trade. The golden lion tamarin is the best example—and a source of hope for many tamarin species—of how we can protect this charismatic group in a human-dominated landscape where both primates and people can thrive in prosperity."

Associação Mico-Leão-Dourado (AMLD) is a Brazilian nonprofit established in 1992 that is responsible for coordinating all efforts to save Golden Lion Tamarins in their native forest and protect the benefits that the forest provides to local people. AMLD works on the ground in Rio de Janeiro to monitor GLTs and forests, advocate for restoration of the Atlantic Forest, plant forest corridors, and engage local people in protecting their forest.   www.micoleao.org.br

Save the Golden Lion Tamarin

Save the Golden Lion Tamarin (SGLT) is a U.S.-based public charity that provides technical and financial support to help Associação Mico-Leão-Dourado achieve our shared vision of saving GLTs and the habitat they depend upon for survival  www.SavetheLionTamarin.org