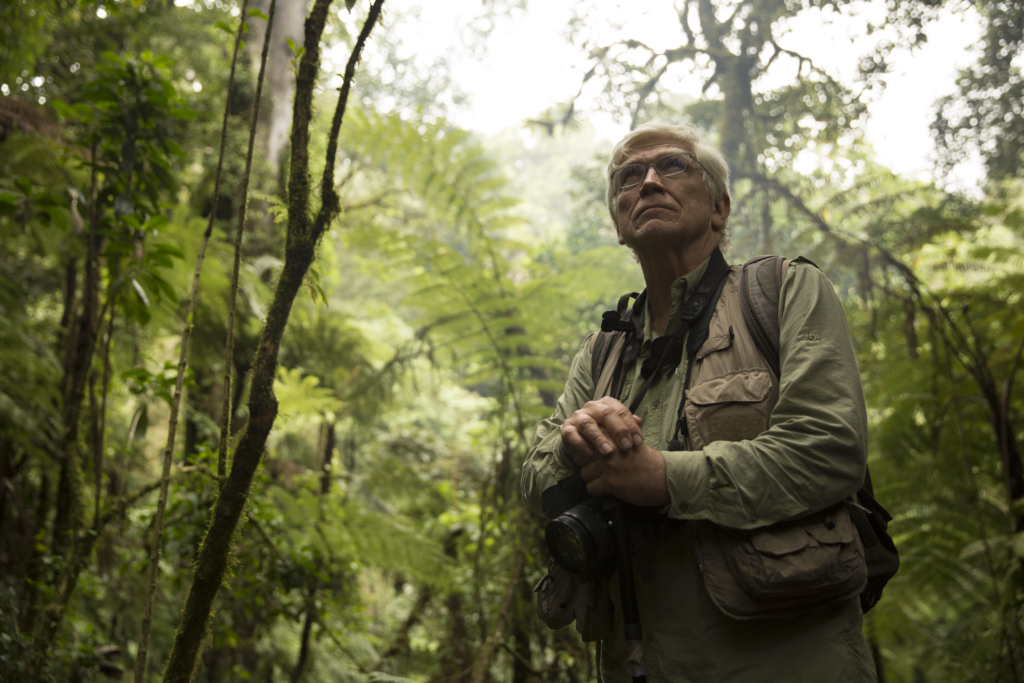 Russ Mittermeier, renowned primatologist and chief conservation officer for Global Wildlife Conservation, is the first person in history to see all 80 genera of primates in the wild. A film crew with the BBC captured the history-making moment when he saw the final primate genus on his life-list in Tanzania in April 2019. Mittermeier and the film crew hiked through the dense forest in the mountains of southwest Tanzania to find the critically endangered kipunji monkey (Rungwecebus kipunji), which was only described by science in 2006. The footage capturing Mittermeier’s sighting of the kipunji monkey appears in the new nature documentary series Primates. The episode featuring Mittermeier will air on BBC One in the United Kingdom Sunday, May 17 at 8:15 p.m. GMT.

The moment was 50 years in the making and driven by Mittermeier’s life-long dedication to studying primates.

“I have always been fascinated with primates,” said Mittermeier. “And being a collector, I always keep lists of everything that I see and do. I have five decades worth of detailed field notes full of observations of wildlife, and especially primates. But this is much more than a hobby. I have long promoted primate ecotourism because I see it as one of our most important tools in achieving primate conservation worldwide.”

Though he is the pioneer of primate-watching, Mittermeier borrowed the idea from the birdwatching community, and he’s hoping that it someday begins to approach birdwatching in its popularity and competitiveness. Birdwatching is at least a $50 billion per year industry in the United States alone, with more than 50 million people self-identifying as birdwatchers. Mittermeier believes that a community of dedicated amateur and professional naturalists could help protect primates and generate very significant revenue for local communities from ecotourism.

“I was really inspired by my son John, who is a world-class bird-watcher,” said Mittermeier. “Through him, I’ve watched how amazingly competitive and interconnected and global the bird-watching community is. And I thought, we can certainly get much more attention focused on primates by making primate-watching competitive and get people out to remote places to add to their life-lists and, in so doing, provide support to local communities.”

Mittermeier has lent his expertise to help make primate watching more accessible. He and his team have produced field guides and pocket guides to help amateurs identify the more than 700 species and subspecies of primates, many of which can look very similar. He even has helped develop a lemur-watching app.

Mittermeier began studying primates in 1969 and his long history of finding elusive primates started shortly thereafter in 1970, when he saw his first wild primate, a spider monkey, in the ruins of Tikal in Guatemala. Some of his most memorable primate sightings were from the early days of his career. In 1973 he retraced the steps of famed naturalists Henry William Bates and Alfred Russell Wallace in the Amazon to find uakari monkeys (Cacajao spp.). Mittermeier navigated the dense flooded forests of the Amazon River basin and became the first non-native person to see these monkeys in their natural habitat.

The following year, Mittermeier set out on yet another expedition to find a the Peruvian yellow-tailed woolly monkey (Lagothrix flavicauda) that had originally been described by Alexander von Humboldt in 1812, but at that time had not been seen since 1926. After nearly 50 years of no confirmed scientific sightings, he found one living as a pet in a village. Nearly a decade and two trips later, in 1983 Mittermeier returned to the Peruvian Andes and finally found yellow-tailed woolly monkeys in their natural habitat and filmed them for the first time.

The most difficult primates to see on Mittermeier’s watch-list were Allen’s swamp monkeys (Allenopithecus nigroviridis) in the Democratic Republic of Congo. These monkeys live deep in almost inaccessible swamps that can only be navigated by canoe.

The kipunji, the last primate on Mittermeier’s list, was not easy to see either. It lives in a mountainous region, which can make it difficult to reach its natural habitat. The kipunji monkey was first described by Trevor Jones of the University of Georgia and his colleagues in 2005 as a species of mangabey. Further genetic analysis revealed, however, that it was more closely related to baboons, and in 2006 Wildlife Conservation Society scientist Tim Davenport placed it in its own genus Rungwecebus, after Mt. Rungwe in the Udzungwa range of Tanzania’s Southern Highlands.

It’s not that unusual for new primate genera to be recognized after genetic analysis and that may mean that Mittermeier may have more travels in his future to continue to ensure that he has seen every genus of primate.

“When I started working on primates there were about 180 species, and now there are 706 species and subspecies and counting,” said Mittermeier. “This is in part because of much further exploration in remote parts of the tropics where 90% of nonhuman primates occurs, and partly because of much more sophisticated genetic analyses that enable us to more clearly define differences among species.”

He predicts that the pygmy slow loris (Nycticebus pygmaeus) from Southeast Asia is the most likely candidate to be reclassified as a new genus.

“As soon as it is split off, I’m going to get on a plane and fly out there because that is one, I have not seen yet,” said Mittermeier.

More information about the series Primates, as well as a blog written by Mittermeier is available on the BBC’s website.

Photo: Russ Mittermeier watching kipunji monkeys in Tanzania in April 2019. The sighting made him the first person to see all 80 genera of primates in the wild. (Credit: Stuart Dunn/BBC)