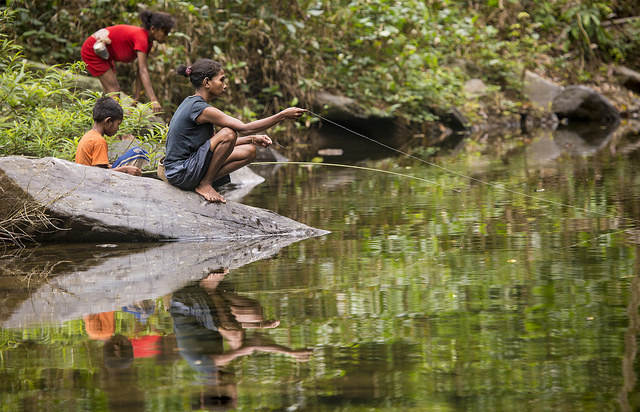 Members of the Batak tribe fishing in Palawan, the Philippines (Photo by Robin Moore)

One of the world’s most critical and irreplaceable areas for unique and threatened wildlife—in addition to the home to the last 200 – 300 members of the indigenous Batak tribe—has received the largest critical habitat designation in the Philippines.

The newly declared Cleopatra’s Needle Critical Habitat, which protects more than 100,000 acres of forest on the lush island of Palawan, is the culmination of a three-year project led by the Centre for Sustainability, Palawan Council for Sustainable Development, City Environment and Natural Resources Office of Puerto Princesa and the Batak tribe, with support from Global Wildlife Conservation, Rainforest Trust and the Amphibian Survival Alliance.

“This landmark achievement is a collective effort among government and non-government institutions—government agencies, NGOs, academic bodies, local communities—that have poured their time and resources to see this initiative push through,” said Jessa Garibay, Centre for Sustainability project manager. “The overwhelming support from the government agencies, in particular, demonstrates their commitment to balancing development with conservation. We laud the commitment to this important cause.”

Of the more than 100,000 acres of land the government has committed to Cleopatra’s Needle Critical Habitat, 17,290 acres came from several barangays (communities of indigenous peoples) that agreed to include the additional acreage from their ancestral lands in the critical habitat designation.

Palawan is the last frontier for conservation in the Philippines, boasting half of its original primary forests, which are some of the oldest and most diverse in Southeast Asia. About 85 percent of the long list of mammals and birds that live only in Palawan live in Cleopatra’s Needle Critical Habitat. Its wildlife residents include the Palawan hornbill, Palawan forest turtle, Palawan bearcat, seven-foot long Palawan monitor lizard, and Palawan pangolin, the critical habitat’s designated mascot. In a 2015 survey of Palawan, researchers re-discovered two amphibian species thought lost to science for 40-50 years.

“There are very few intact places left in the world like Cleopatra’s Needle, which is home to a unique and veritable treasure trove of biodiversity,” said Don Church, GWC president and director of conservation. “This critical habitat designation is going to help put Palawan on the map as a leader in wildlife conservation and ecotourism, a model we hope inspires the protection of other irreplaceable places throughout the world.”

The last 200 – 300 members of the Batak tribe of hunter-gatherers have played a critical role in the establishment of the new critical habitat, which provides an opportunity for the tribe to build a sustainable livelihood through ecotourism. The Batak tribe have traditionally lived in balance with the forest. But illegal logging, charcoal production, land conversion for agriculture, quarrying, and infrastructure for unsustainable tourism have led to a decline in forest cover and influx of outsiders that has threatened the Batak way of life and the wildlife species the tribe shares its home with.

“Palawan’s forests harbor incredible concentrations of endemic and endangered wildlife and are under immense threat from deforestation,” said Paul Salaman, Rainforest Trust CEO. “This project demonstrates the unique ability of international and local conservation groups to mobilize to protect some of the world’s most critical biodiversity and indigenous peoples.”

The Centre for Sustainability has already started training eco-tourism guides to move individuals away from livelihoods that involve resource extraction, forest destruction or wildlife poaching and will launch the Eco-Tourism Livelihood Program Dec. 1. The organization will also be leading the implementation of a forest management plan and, in January of 2017, working with forest enforcement patrols in the critical habitat.

Photo: Members of the Batak tribe fishing in Palawan, the Philippines (Photo by Robin Moore)

The Centre for Sustainability PH is a non-profit environmental organization working on sustainable community development in Palawan, the Philippines. The mission of CS is to contribute to A Sustainable Future for Palawan through the establishment of terrestrial and marine protected areas with an integrated approach incorporating three key areas: Livelihood, Education and Conservation. CS work comes from communities for communities to communities, incorporating local knowledge and practices in project development to ensure continuing relevance and long-term sustainability for many years to come. Learn more at http://www.centreforsustainability.org/

The Amphibian Survival Alliance (ASA) promotes the conservation of amphibians and their habitats through dynamic partnerships worldwide. The ASA raises awareness of amphibians and their plight, and helps channel vital resources toward the implementation of the global Amphibian Conservation Action Plan, working directly with the IUCN SSC Amphibian Specialist Group and Amphibian Ark. ASA champions the extraordinary work of its partners, and seeks to recruit diverse new partners to build a strong, collaborative future for amphibian conservation.