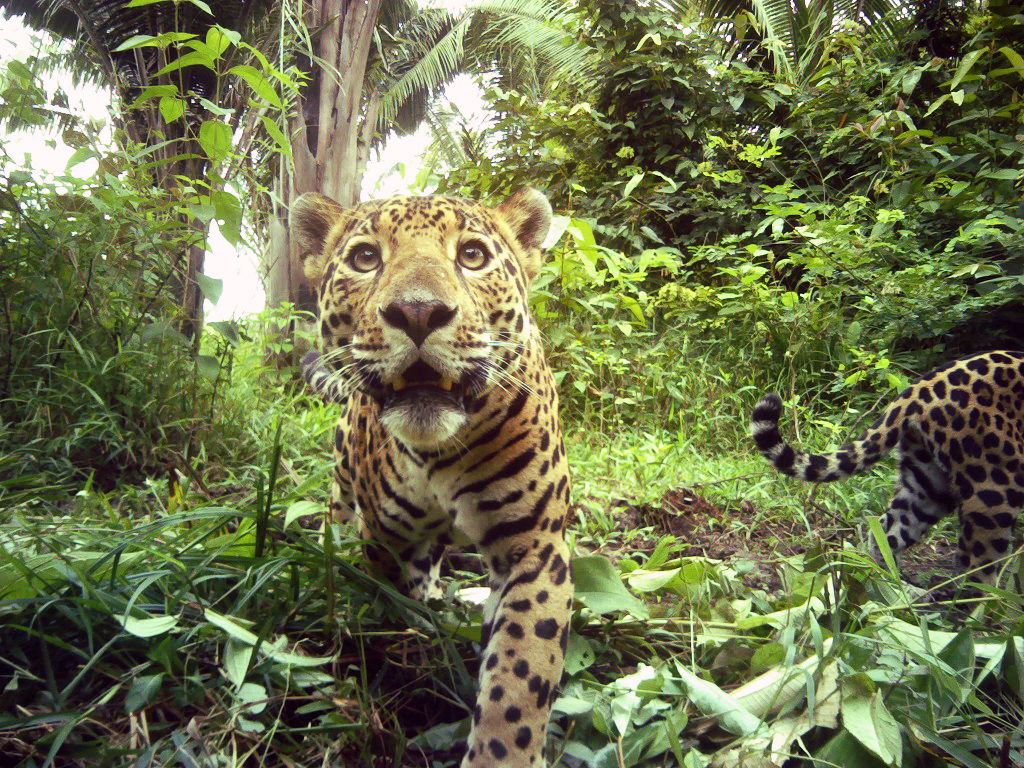 Official legal protection of Belize’s Maya Forest Corridor is expected in the near future as the government and conservation partners work with key stakeholders, including communities and the private sector, to secure the corridor’s future.

"We recognize that the window of opportunity for us to secure connectivity in the Maya Forest Corridor is closing fast,” said Omar Figueroa, Belize Minister of State within the Ministry of Agriculture, Fisheries, Forestry, the Environment, Sustainable Development and Immigration. “A team of local and international conservation biologists and professionals recognize the importance of this, and shoulder-to-shoulder are providing valuable support to secure the integrity of this area."

Figueroa continued: "One thing that has identified us as a country, as a people, is a desire to maintain and to protect the natural beauty of this country. The government, and my ministry in particular, stands committed to enshrine in legislation whatever we need to do to maintain the integrity of the Maya Forest Corridor well into the foreseeable future.”

The Maya Forest Corridor, which is in central Belize, serves as a gateway connecting and ensuring the survival of many wildlife species. As highlighted in the recent United Nations global biodiversity report, wild habitat and its protection, including that of the Maya Forest Corridor, is crucial for the well-being of people, providing sustainable livelihoods and ecosystem services, including clean air and water security, healthy soil for agriculture, and drought and flood control for local communities.

Yet, without protection, the Maya Forest Corridor is critically imperiled, having already been reduced by more than 65 percent over the past decade due largely to deforestation for large-scale agricultural developments, including sugarcane. Since 2011, the Maya Forest Corridor has faced deforestation rates almost four times the national average, and major clearings in the last few months indicate that without action like that announced this week, Central America’s largest forest block will be severed from its nearest forest block to the south, the Maya Mountain Massif.

“Because the Maya Forest Corridor holds important natural heritage not just for Belize but for the world, it is only fitting that an international group of partners has come together to support the government of Belize in protecting this unique place,” said Chris Jordan, Global Wildlife Conservation’s Central America and Tropical Andes coordinator. “This model of bringing together a consortium of conservation NGOs and government staff working together is the future of effective conservation, and a model Global Wildlife Conservation is proud to support.”

Cut down to a mere 5-6 mile stretch, the corridor is one of the last remaining squeeze points for jaguars to enter the Selva Maya to the north and to move south to the rest of Central and South America. It is also the only area connecting Belize’s two Jaguar Conservation Units: the Maya Mountain Massif in Southwest Belize and the rest of the Selva Maya to the north, which extends into Mexico and Guatemala. Losing the genetic connectivity of the Maya Forest Corridor would be a step toward extinction for the jaguar and many other terrestrial wildlife species with cultural significance in Belize.

The wetlands of the Maya Forest Corridor also have an important role to play as a climate change refuge and flood retention zone. Unlike some Central American countries that have opened their doors to drastic deforestation, by securing this corridor, Belize is maintaining climate resilience for its people and animal species and securing a position as a climate leader in the region.

On the tailwinds of the government’s declaration, this coalition of non-governmental partners is committed to the protection of the Maya Forest Corridor and is continuing to secure resources needed to protect the critical 10,000 hectares of corridor in perpetuity.

"There's never been a threat so imminent to an area that is so elemental to the long-term persistence and health of generations of wildlife and people in Belize and the Selva Maya,” said Elma Kay, science director and co-founder of the University of Belize Environmental Research Institute. “Protecting the Maya Forest Corridor is urgent but still within reach if we work together, and the government has taken the important first step to do so this week."

“The government of Belize is to be celebrated and commended for making this critical step forward for the future of its wildlife and people, many of whom rely heavily on ecotourism for their livelihoods. Through this commitment, Belize has recognized that the clock is ticking for the Maya Forest Corridor and admirably chosen to invest in the survival and well-being of its wild animals, like the jaguar, and the nation’s communities and economy.”

“We welcome this decision taken by the government of Belize as it contributes to securing the connectivity and integrity of the Maya Forest that is key for conserving wide ranging species like the jaguar as well as for human livelihoods and the provision of ecosystem services. Belize’s leadership is particularly important since, according to our most recent Living Planet Report, species population declines are especially pronounced in the tropics, with the Neotropical realm, covering South and Central America, and the Caribbean, suffering the most dramatic decline with an 89% loss compared to 1970.”

“The Maya Forest is Central America’s largest forest. It is critical for wildlife, people, and the global climate. It cannot be cut in half. We enthusiastically applaud the Belize Government’s leadership, and exhort others to support this important effort.”

“A world with corridors connecting protected areas giving animals options to roam and flourish is critical to survival of species. All these small dots on the map - if you save one, that’s great. But if you save enough of these unique fragments in such a way that they can be linked together then you’ve created a system. If others do this in other countries and continents we may patch together a network of survival for the remaining species of our planet.”

Monkey Bay was established on Earth Day 1990 when the Minister of Tourism and the Environment recognized this 1000-acre pine savannah, tropical forest and riverine landscape as one of the first Privately Protected Areas (PPA) within the Maya Forest Corridor (MFC). To grow this public/private conservation action, Monkey Bay advocated to expand the wildlife corridor effect of the privately protected sanctuary, and in 1994 the Minister of Natural Resources declared the Monkey Bay National Park as a 2,250-acre public lands corridor expansion of Monkey Bay Wildlife Sanctuary. In addition to managing the Monkey Bay PPA, the NGO social enterprise serves as an environmental education and training centre that hosts Belizean and international student groups to the MFC. The field school programs are intensive, short-term experiential programs. Lectures and field studies are the mainstay of Monkey Bay’s field school programs in natural history, watershed and marine science, cultural immersion, sustainable living and protected area conservation investment management. Visit http://www.monkeybaybelize.com/

Panthera, founded in 2006, is devoted exclusively to preserving wild cats and their critical role in the world’s ecosystems. Panthera’s team of leading biologists, law enforcement experts and wild cat advocates develop innovative strategies based on the best available science to protect cheetahs, jaguars, leopards, lions, pumas, snow leopards and tigers and their vast landscapes. In 36 countries around the world, Panthera works with a wide variety of stakeholders to reduce or eliminate the most pressing threats to wild cats—securing their future, and ours. Visit panthera.org

The University of Belize, created in 2000, is Belize’s national university committed to excellence in higher education, research and service for national development. In January 2010, the University launched its Environmental Research Institute to narrow the wide gap in local capacity for research and monitoring through partnerships, training, communication and outreach. Belize has a wealth of natural resources that support the country's most important industries, including tourism and agriculture. Recognizing this, the work of the Institute is focused on producing results that are directly relevant and applicable to the effective management, sustainable use and conservation of these resources, while continuously working to empower the new generation of Belizean professionals. Visit uberibz.org Follow: @UB ERI. For more information: +501 822 2701

WWF is one of the world’s largest independent conservation organizations, with over 5 million supporters and a global network active in more than 100 countries and territories. WWF's mission is to stop the degradation of the Earth's natural environment and to build a future in which humans live in harmony with nature, by conserving the world's biological diversity, ensuring that the use of renewable natural resources is sustainable, and promoting the reduction of pollution and wasteful consumption. Visit www.wwfca.org for the latest news and media resources and follow us on Facebook: @WWF.Mesoamerica

The Belize Zoo and Tropical Education Center is a non-governmental, non-profit organization focused on wildlife conservation through wildlife rehabilitation and environmental education. The Zoo was started in 1983 to provide a home for a collection of wild animals which had been used in making documentary films about tropical forests. The realization that the Zoo’s local visitors were unfamiliar with the different species of wildlife in Belize fomented the commitment to develop it into a dynamic wildlife education center. Today, The Belize Zoo and Tropical Education Center exhibits over 175 animals mostly orphaned, rescued, rehabilitated or born at the zoo, representing over 45 native species; it receives over 86,000 visitors annually, 13,000 who are Belizean students, parents and teachers. Progressive education programs and popular zoo events include: National Tapir Day; birthday celebrations for Junior Buddy the Jaguar and Panama the Harpy Eagle; summer camps; teacher and tour guide workshops; and Student Career Training. The Belize Zoo and Tropical Education Center believes that by bringing Belizeans closer to the animals which are their natural heritage, they will feel proud of these special resources, and want to protect them for future generations. Visit: www.belizezoo.org

Foundation for Wildlife Conservation under the direction of Dr. Gil Boese purchased Runaway Creek in 1999 to protect it, creating hope for flora and fauna and endless research and education opportunities. Runaway Creek Nature Reserve is a critical link in the Maya Forest Corridor. Dr. Boese worked feverishly for 60 years in conservation efforts all over the world. He was also director of the Milwaukee County Zoo. With the loss of Dr. Boese in 2018, the not for profit foundation that has been employing local people for almost 20 years, and stewardship of the property was assumed by Cindy Law of Bainbridge Island, Washington. Cindy and her late husband Larry had been negotiating for the purchase of Runaway Creek for several years. Having met Gil and his wife Lillian in 2004, and traveling with them numerous times to Africa and Belize, Cindy and and Larry learned well the importance of conservation. Having finally secured the property, Cindy’s intention is to continue the good work begun by Dr. Gil Boese and to support the integration of Runaway Creek into the Maya Forest Corridor. Hope is that Runaway Creek can serve not only as a model for conservation but also as one of many reserves in a network throughout Central America and beyond. Visit: www.runawaycreekbelize.org