Rediscovery of the Somali Sengi, One of Global Wildlife Conservation’s 25 Most Wanted Lost Species, Delights and Surprises Mammal Biologists 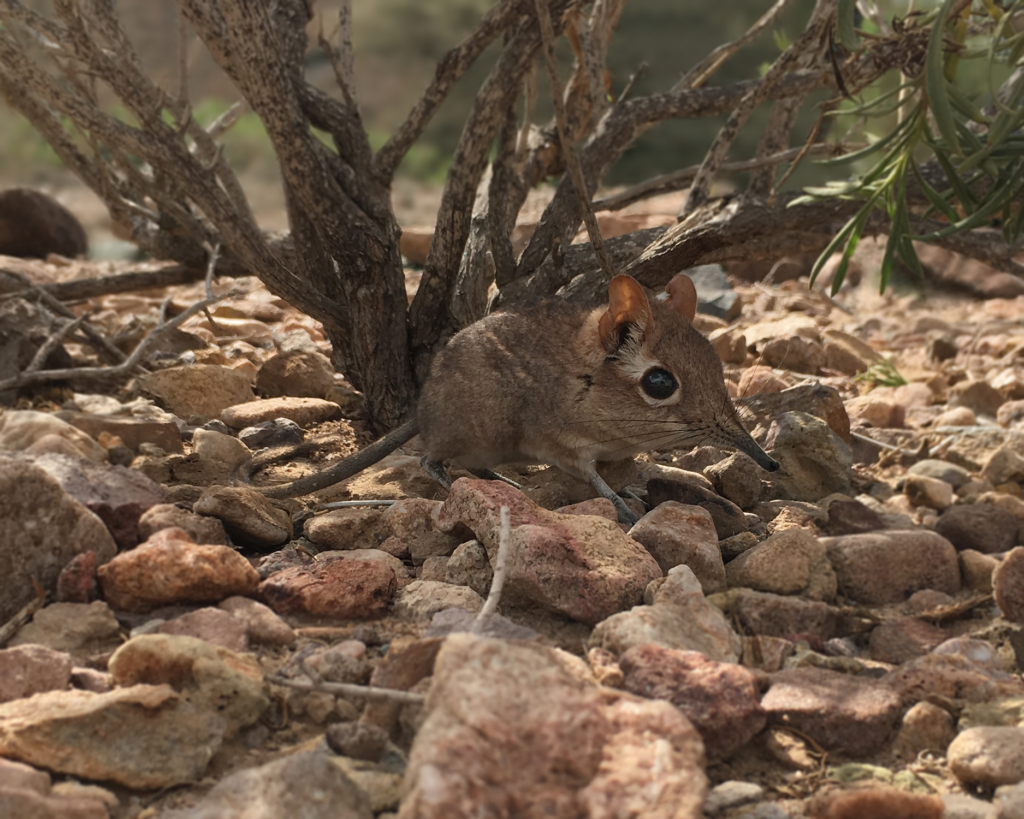 It dashes among boulders on hindlimbs built more for gazelles than small mammals. It mates for life, sharing a small territory with its chosen beau. It is related to aardvarks, elephants and manatees but is only a few inches in size. It feasts on insects with its long, trunk-like nose. And it has been lost to science for at least half a century.

A paper published today in the open-access, peer-reviewed journal PeerJ announces the rediscovery of the Somali sengi (Elephantulus revoilii) in Djibouti, a country in the Horn of Africa. Sengis are also known as elephant-shrews, even though they are neither elephants nor shrews. The Somali sengi, lost to science since 1968, is one of Global Wildlife Conservation’s 25 most wanted lost species and has been among the least well-known of the world’s 20 species of sengis, making it one of the last big mysteries of African mammalogy. It is known to science only from 39 individuals collected up to hundreds of years ago and stored today at museums.

“Sengi biology is a science of passion,” said Steven Heritage, a research scientist at the Duke University Lemur Center and lead author on the paper. “It takes somebody that’s motivated by passion for sengis to go out looking for this lost species. They are not well-known animals, but when you see them, it’s impossible not to adore them.”

In 2019, a team of scientists including Heritage; legendary sengi researcher, the late Galen Rathbun from the California Academy of Sciences; and Houssein Rayaleh from Association Djibouti Nature, set out in search of the eccentric insectivorous mammal. Although the species was previously known only from Somalia, Rathbun and Heritage had gotten tips that it could be in Djibouti. Rayaleh, a Djiboutian research ecologist and conservationist with a specialty in birds, knew he had seen the animal before, and local Djiboutian people were able to identify the animal from a series of photographs during interviews.

“For us living in Djibouti, and by extension the Horn of Africa, we never considered the sengis to be ‘lost,’ but this new research does bring the Somali sengi back into the scientific community, which we value,” Rayaleh said. “For Djibouti this is an important story that highlights the great biodiversity of the country and the region and shows that there are opportunities for new science and research here.”

The team’s survey did not disappoint. Using information from the interviews, results from scat analysis, and the knowledge that the sengis would need some sort of shelter from raptors looking for a meal, they set a total of 1,259 traps at 12 locations, baiting the traps with a smelly concoction of peanut butter, oatmeal and yeast. They caught a Somali sengi—distinguished from the Rufous sengi by a tuft of fur on its tail—in the very first trap they set in the rugged, rocky, boulder-filled landscape.

“It was amazing,” Heritage says. “When we opened the first trap and saw the little tuft of hair on the tip of its tail, we just looked at one another and couldn’t believe it. A number of small mammal surveys since the 1970s did not find the Somali sengi in Djibouti—it was serendipitous that it happened so quickly for us.”

In total the team saw 12 sengis during their expedition and obtained the first-ever photos and video of live Somali sengis for scientific documentation. They did not witness any looming threats to the species’ habitat, which is dry and largely inhospitable to human activities such as development or agriculture. Because the abundance of the species seems about the same as other sengi taxa and because they were able to determine that its range extends beyond just Somalia into Djibouti (and possibly even Ethiopia), they were able to make a recommendation to the IUCN Red List of Threatened Species that the Somali sengi’s current data deficient status get updated to least concern.

“Usually when we rediscover lost species, we find just one or two individuals and have to act quickly to try to prevent their imminent extinction,” said Robin Moore, one of GWC’s Search for Lost Species program leads. “This is a welcome and wonderful rediscovery during a time of turmoil for our planet, and one that fills us with renewed hope for the remaining small mammal species on our most wanted list, such as the DeWinton’s golden mole, a relative of the sengi, and the Ilin Island cloudrunner.”

The rediscovery is also a tribute to one of the biologists who found it and a coauthor on the PeerJ paper, Galen Rathbun, who became ill from metastatic melanoma and passed away only a few months after this expedition. Rathbun had a lifelong passion for sengis, decades of experience with both rock-dwelling and non-rock-dwelling versions of the animal, and a large portion of what biologists know about sengis can be attributed to him, Heritage said. Rathbun was the long-time chair of the IUCN SSC Afrotheria Specialist Group and involved in the discovery of two new sengi species, the grey-faced sengi (Rhynchocyon udzungwensis) in 2008 and the Etendeka round-eared sengi (Macroscelides micus) in 2014. He also made significant contributions to the study and conservation of marine mammals, including dugongs, manatees, and sea otters.

One of the most significant findings from the rediscovery of the Somali sengi comes from DNA analysis that shows that the Somali sengi’s lineage is most closely related to sengis that live as far away as Morocco and South Africa. This places them not in the Elephantulus genus, as believed historically, but instead in a newly named genus called Galegeeska. This means that an animal that doesn’t leave an area smaller than an average-sized backyard has somehow dispersed across great distances over time, leaving biologists with a new sengi evolutionary mystery to solve as they continue to try to piece together their genetic family tree.

Heritage and Rayaleh plan to launch another expedition in 2022 to GPS radio-tag individual sengis to start to answer some fundamental questions about the species: how they use their space, how pairs share their space, whether they are most active at night or during the day, and under what conditions they are most active. Future efforts will also include research to figure out which other countries they live in and setting up a monitoring program to ensure the population sizes remain stable.

The Search for Lost Species is the largest-ever quest to find and conserve wildlife lost to science for at least a decade. GWC has confirmed the rediscovery of four other species from its 25 most wanted lost species list: Jackson’s climbing salamander in Guatemala, both the Wallace’s giant bee and the velvet pitcher plant in Indonesia, and the silver-backed chevrotain in Vietnam.

The paper’s additional author is Djama G. Awaleh with the Department of Environment and Sustainable Development in Djibouti City’s Ministry of Urban Affairs, Environment and Tourism.

“Data collection and research are critical in addressing the problem of data deficiency on the IUCN Red List, which is our barometer of the status of our planet’s biodiversity. Finding that the Somali sengi exists in the wild is the first step in conservation. Now that we know it survives, scientists and conservationists will be able to ensure it never disappears again.”

“In a single expedition to a part of Africa that is challenging to work in, Steven and the team have achieved remarkable success. Not only have they formally documented the continued existence of the Somali sengi for the first time in 50 years, they have also corrected our understanding of the species’ phylogenetic position through the identification of a new genus, increased our knowledge of its habitat requirements, and determined the likely extent of its distribution. Using these new insights in conjunction with knowledge obtained from local people, the team has also determined that the conservation status of the species is probably secure—at least for now. This is a very welcome finding for conservationists working on the Afrotheria and would have been a very pleasing outcome for our former colleague Galen Rathbun, who we lost last year.”