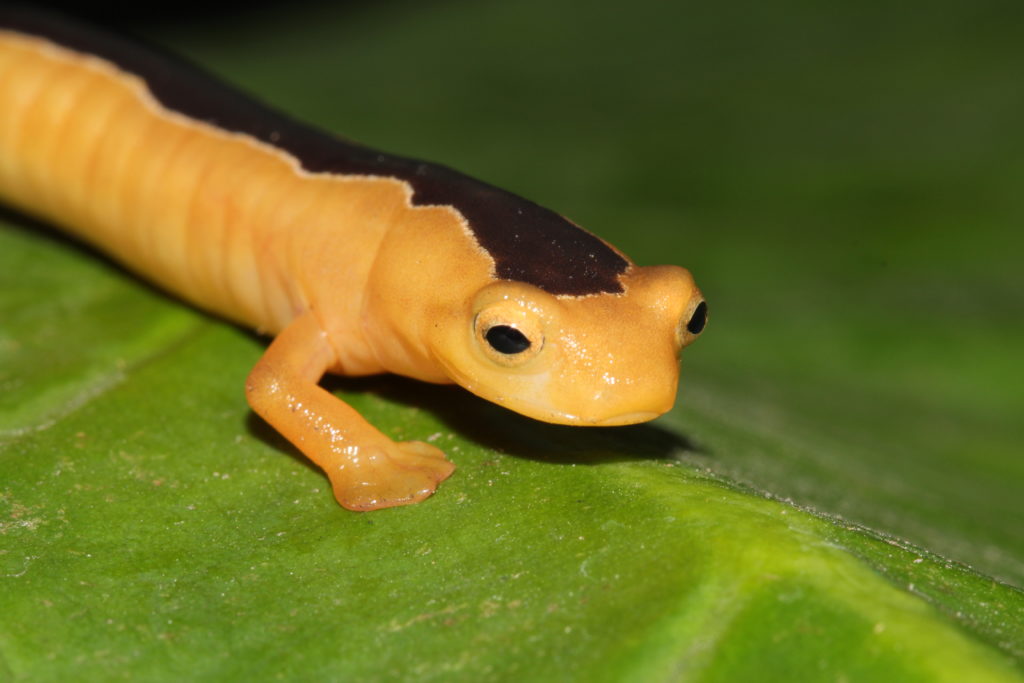 The Search for Lost Species initiative is today celebrating the incredible and unexpected rediscovery of the first of its top 25 “most wanted” lost species, the Jackson’s Climbing Salamander (Bolitoglossa jacksoni), lost to science since its discovery in 1975. The rediscovery comes months before an organized expedition to Guatemala’s Cuchumatanes Mountain range to look for the animal, and was made possible in part because a group of organizations, including Global Wildlife Conservation and Rainforest Trust, established the Finca San Isidro Amphibian Reserve in 2015 to help protect the species’ habitat.

“I love this story because it conveys how protecting habitat gives species a fighting chance to survive on this planet,” said Don Church, president of GWC and Search for Lost Species lead. “This rediscovery can only be a good omen for the future of the Search for Lost Species campaign. It’s a sign that if we get out there and work at it, many of these species can be found and saved.”

A guard at the Finca San Isidro Amphibian Reserve, Ramos León, discovered a juvenile Jackson’s climbing salamander—only the third individual ever seen—on the edge of the reserve while out on patrol this month. He sent a photo to Carlos Vasquez, curator of herpetology at USAC University in Guatemala and coordinator of the amphibian conservation program at local NGO and GWC partner FUNDAECO, who confirmed that the species in the photo was, indeed, the Jackson’s climbing salamander.

Vasquez has been on more than 30 trips to find the species, nicknamed the “golden wonder” for its brilliant yellow hues, since 2005, spending more than 3,000 hours in search of it. Earlier this year he led a workshop for the reserve’s four guards to show them photos of the salamander and to discuss where they may find it—in moss, leaves or bark—while out on patrol in the reserve during the rainy season. His efforts paid off.

“I explained to them how important this species is and I left a poster there so they could see a picture of the Jackson’s climbing salamander every single day,” Vasquez said. “We had started to fear that the species was gone, and now it’s like it has come back from extinction. It’s a beautiful story, and marks a promised future for the conservation of this special region.”

In 2015, spurred by the 2014 expedition and the earlier rediscovery of the Finca Chiblac salamander and the long-limbed salamander, a consortium of international groups—GWC, MUSHNAT, FUNDAECO World Land Trust, Rainforest Trust, the International Conservation Fund of Canada and the Amphibian Survival Alliance—established the Finca San Isidro Reserve (also called the Yal Unin Yul Witz Reserve) to protect some of the last remaining habitat for the species.

“When 40 years later [after we discovered the species] as an act of faith, a tract of land next to where we discovered it was protected, we all held our breath hoping that this exceptional phantom would reappear,” said Elias, who today is a partner at a private investment firm in Boston. “The rediscovery of this rarest of the rare shows how important habitat preservation is to the persistence of these special animals in these exceptional places, and for me personally it is a moment of sheer joy.”

Global Wildlife Conservation, FUNDAECO and Rainforest Trust are now joining forces to expand the reserve to protect the Jackson’s climbing salamander and a treasure trove of additional endemic and endangered Guatemalan species threatened by climate change, habitat loss and infectious disease. GWC will be launching a #GivingTuesday fundraising campaign in November to help support the expansion of the reserve.

In the meantime, Vasquez and team are conducting research where the salamander was found to better understand the species’ ecology, and will continue to spend time in the field to look for additional individuals to assess the population.

“With the Cuchumatanes Range under threat—a well-known epicenter for endangered amphibians and one of the highest global conservation priorities—in 2015 we acted swiftly to support the purchase and protection of critical properties. And we are delighted to report that this important wildlife refuge has permitted the survival and ultimate rediscovery of the spectacular Jackson's climbing salamander.”

“The night I got the news from Carlos that Bolitoglossa Jacksoni had been rediscovered, I flew off the couch where I’d been falling asleep, let loose a string of expletives (in a good way), and did a little happy dance. I’m more than delighted that Yal Unin Yul Witz exists so that Jacksoni and other wonders can survive and I’m so pleased to hear that it was a guard protecting the preserve who found this beauty. My congratulations and thanks to Carlos and all who have worked to make Yal Unim Yul Witz a reality.”