Engaging people with wildlife they may never see up close is a challenge, but a challenge that GWC Communications Director Robin Moore embraces. Moore, an internationally acclaimed nature photographer, says photography plays a vital role in opening people’s eyes to the wonder of the planet.

On Nov. 15, Moore will be sharing his stories about the intersection between photography and conservation at the International League of Conservation Photographers’ WILDspeak, in Washington, D.C. His presentation, called “Back from the Brink: Frogs in Haiti” will focus on the Search for Lost Frogs initiative, and a program he co-founded called Frame of Mind, which uses photography and storytelling to help connect Haitian youths with their natural and cultural worlds.

Ahead of WILDspeak, we highlight four of Moore’s stunning photos, with his description of the incredible stories behind them: 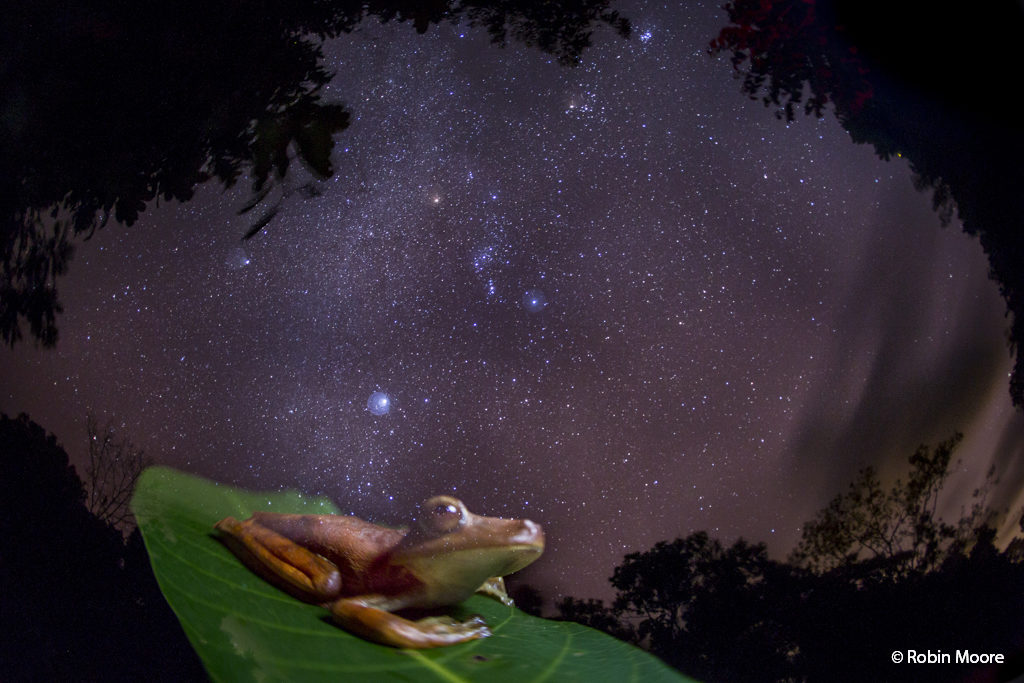 The Vanishing. “I wanted to capture one image that could represent the disappearance of amphibians around the world without simply depicting dead frogs. I had this image in my head, but capturing it was another story entirely. Earlier this year I spent eight days in Cocobolo Nature Reserve in Panama, and I knew this would be an opportunity to experiment with different techniques. After many failed attempts and several cloudy nights, my final night in Panama was clear, and one of our team had found an Amazon Gladiator Frog—a wonderful and large frog. I set up my tripod, clicked on my fisheye lens, moved within inches of the frog, set my flash on a light stand behind me (far back so that it wouldn’t be picked up by the fisheye lens). I then focused on the frog and triggered a 30-second exposure. As soon as the flash had effectively frozen the frog in the frame, I twisted the focus ring on my lens to infinity, ensuring that the Milky Way would now be in focus. During the 30-second exposure the frog moved, giving it a ghostly appearance in the final image—a metaphor for the disappearance of frogs—and I captured an image that was as close to the one in my head as I knew I would get.” 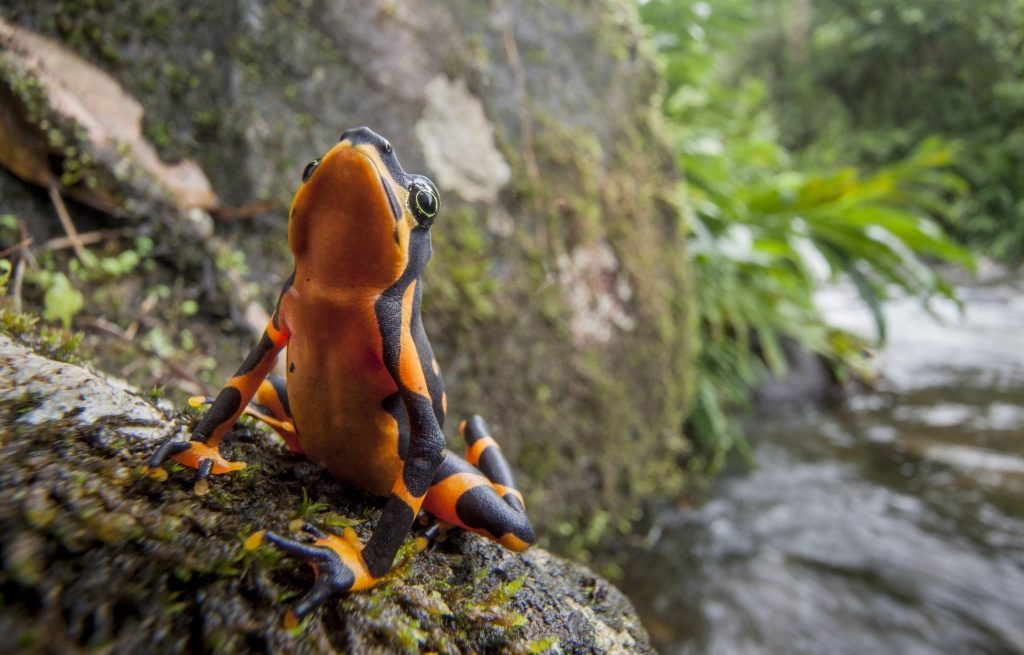 Lost and Found. “Conservationists believed the Variable Harlequin Frog of Costa Rica had succumbed to extinction at the hands of a rampaging fungus sweeping throughout Central America before its remarkable rediscovery in 2003. Its reappearance inspired a global search for lost amphibians, which culminated in my book called In Search of Lost Frogs. As I was writing this book, I realized that in order to bring the story full circle, I needed to travel to Costa Rica to find and photograph the harlequin frog. The location of the frog was—I quickly discovered—shrouded in secrecy, but I eventually found somebody willing to help me locate one of only two known populations. Two flights, a boat ride and a drive in a rental car into the clouds along narrow, windy roads brought me to an area that looked like the lost world, where I would begin my search for the frog. A low blanket of cloud and air heavy with the threat of rain did not bode well for my search, and I felt the uncertainty tying a knot in my stomach. It felt a long way to come to not find a frog. Nonetheless, I followed my guide to a river, and we picked our way up the bank, scouring rocks and nooks for a flash of yellow or orange. The appearance of this frog felt, at first, like a trick of the imagination. But as I drew closer my brain caught up and I realized I was face to face with the iconic frog. My camera, which had succumbed to the humidity a few days earlier, started working long enough for me to capture this wide angle close up of the frog in its habitat.” 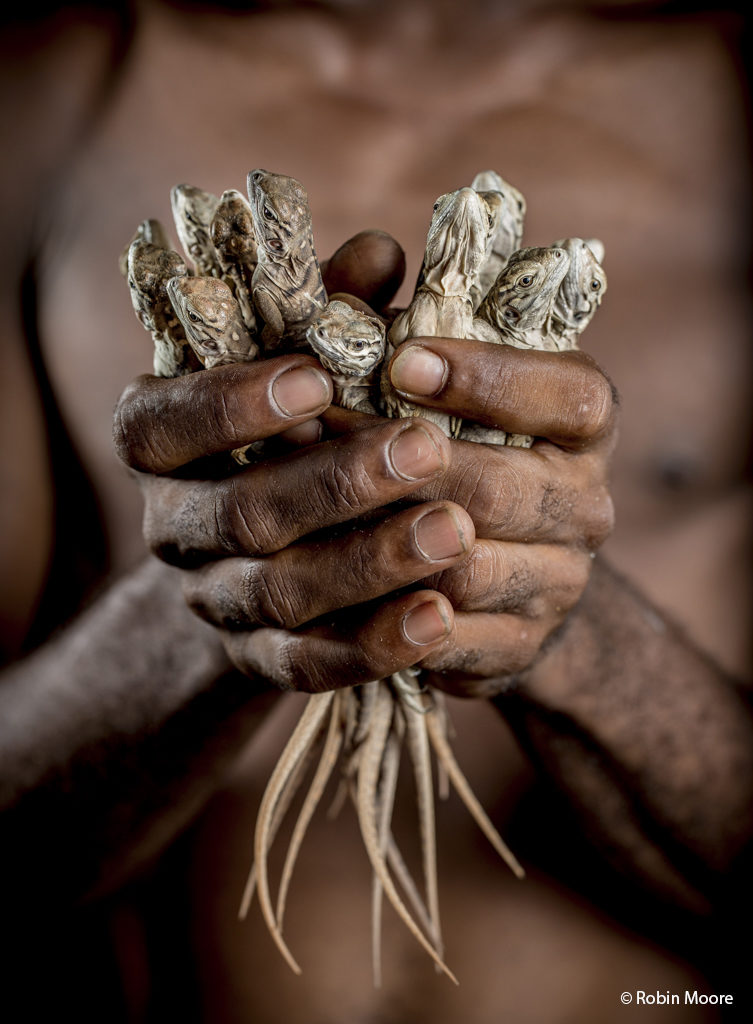 Say it with Iguanas. “When the Jamaican Iguana was rediscovered in 1990 after four decades without trace, it received the dubious honor as being one of the rarest lizards in the world. The iguana has been brought back from the brink of extinction in what has been hailed as one of the most inspiring species conservation success stories. And so it was with great alarm that I learned, in early 2014, of the Jamaican government’s plan to allow a massive transshipment port to be built in the heart of the Portland Bight Protected Area, the last stronghold for the iguana. Over the course of a year and a half I traveled twice to Jamaica to capture images and video to shine the spotlight on the issue. I tried to time my second visit to coincide with the hatching of iguanas so that I could photograph one of the local iguana technicians, Booms, with a handful of iguanas. The biggest challenge was predicting the exact week that the iguanas—which hatch en masse over a matter of days—would emerge from the ground. Months of preparation and careful calculation paid off, as my week in Jamaica coincided with hatching week, and I managed to get this shot of young iguanas, just hours old, that Booms was collecting for a head-starting program.” 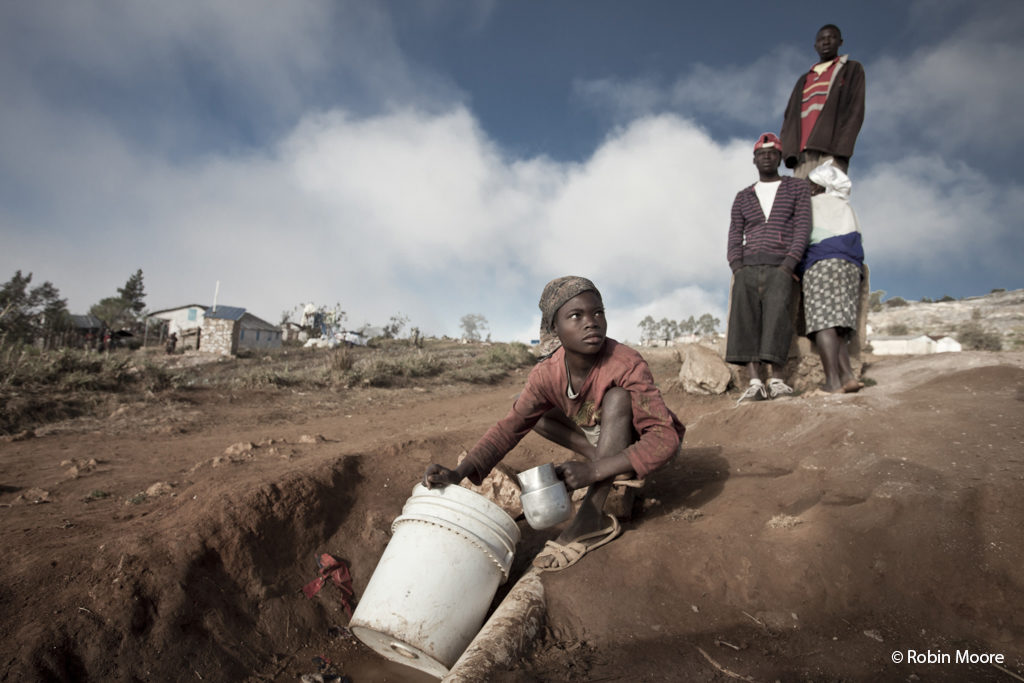 Inextricably Linked. “It’s impossible to protect frogs, iguanas and other creatures without working with the people that share their homes. Only by finding shared values can we together paint a picture of a joint vision of a more prosperous future. In Haiti, the fate of the frogs and the local people are so inextricably linked to the health of the ecosystems that supply such basic needs as clean water and food. In Haiti, we have used photography and storytelling to help young Haitians view the natural world on their doorstep through a new lens. Whilst running a workshop with a group of youth I saw this girl near Parc La Visite trying to collect water from a denuded hillside—the scene spoke to our reliance on healthy ecosystems to thrive.”